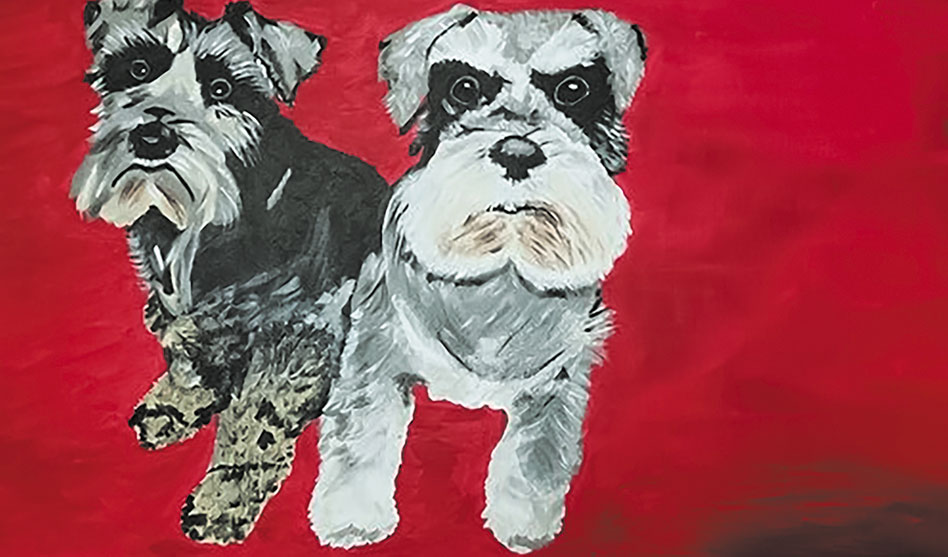 Artist turned her pet painting hobby into a comforting side hustle

If there’s ever a doubt that wine and art don’t mix, Cathy O’Neal will prove you wrong. Thanks to a fortuitous visit to a Painting with a Twist event, where guests sip wine and follow an instructor’s paint directions, she discovered a whole new passion. Already a dog lover, O’Neal combined her acrylic brush strokes with barking subjects, and a new chapter opened up.

“I started doing it for friends as gifts,” she said. “Elaine Liner said, ‘I hope you’re selling these.’ So in about 2014, people began to pay me to do it. I do think they can make very thoughtful, personal presents.”

Area theatergoers may be familiar with O’Neal either through her work with several local companies as a stage manager or crew member or through her work, which she often donates to theater raffles and silent auctions. Most recently, she donated a pet painting to Uptown Players’ Broadway Our Way auction in June. Ryan Teschner was the lucky winner. 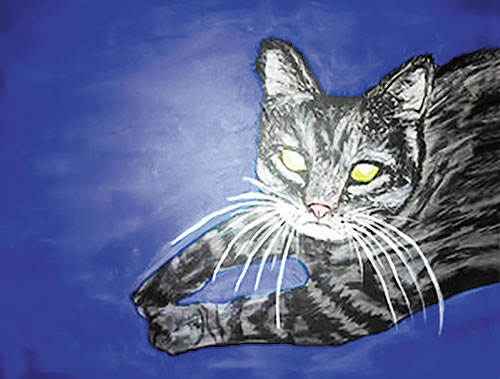 “Honestly, I’ve been bidding on that pet portrait for nearly a decade,” Tezzchner said. “I have told several people of my quest to win, and they laugh, telling me I could have just paid for it by now.

“Every year I’m excited to see that Cathy is still donating her time for the fundraiser. And even though I’ve now won, I will continue to put tickets in that [auction] jar as long as it’s there,” he added.

O’Neal’s work theater goes way back before her pet paintings – particularly with Uptown.

“I have known [Uptown producer Jeff Rane] for a long time, from when he was acting at Theatre Arlington where I stage managed,” she said “When he and Craig decided to start Uptown Players, we were excited and knew they would succeed.”

So she jumped backstage to help out. Then she was hired as a stage manager in the company’s second season.

Since then she’s worked with Theatre Three, Circle Theatre and Theatre Arlington.

While at Uptown working on Forbidden Broadway, O’Neal joined others for a painting class with wine. She had never painted in her life until then, she said.

“I fell in love hard, and I felt like I could do it,” she said. “I kinda had this talent for it.”

O’Neal bonded with the teacher and even took private classes with her. Her first pet portrait was of her own dog in 2011. Since then, she’s painted 35 dog portraits total — and one cat. 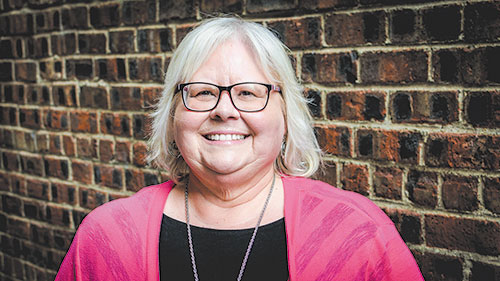 O’Neal said she actually stayed away from art before because of some middle school trauma.

“We had this art teacher who was just the worst,” she explained. “She belittled us and critiqued us so badly. I was scared to death of her.

“So I came away thinking I was no good for it and never tried art.”

But look at her now.

As she developed her style, O’Neal discovered that she found painting animals to be quite relaxing; when she is painting, she’s not thinking about her household chores or the deadlines for the grants she’s working on as the current development director for Theatre Arlington.

And in painting pets, she has cultivated her passion as well as her somewhat accidental side hustle.

And it was at Uptown she found one of her best and first customers.

“The guys who won the auction were my first paying customers. After I delivered theirs, they ordered portraits for gifts and friends,” she said.

O’Neal paints from photos clients give her and depending on their choices, she creates works on 16×20 or 8×8 canvases.

“I encourage [clients to send] more than one photo so we can look at them together,” she said. “I prefer them to be on solid backgrounds to make it all about the pet, and I like to put them on a bright background. People will tell me that ‘You’ve really captured my dog.’”

Her pricing ranges from $60-$100, and, on average, a painting takes her from two to three weeks to complete.

“I’ll ask if there’s a deadline like a birthday or occasion, and on the sizes, everything is open to negotiation,” she said.