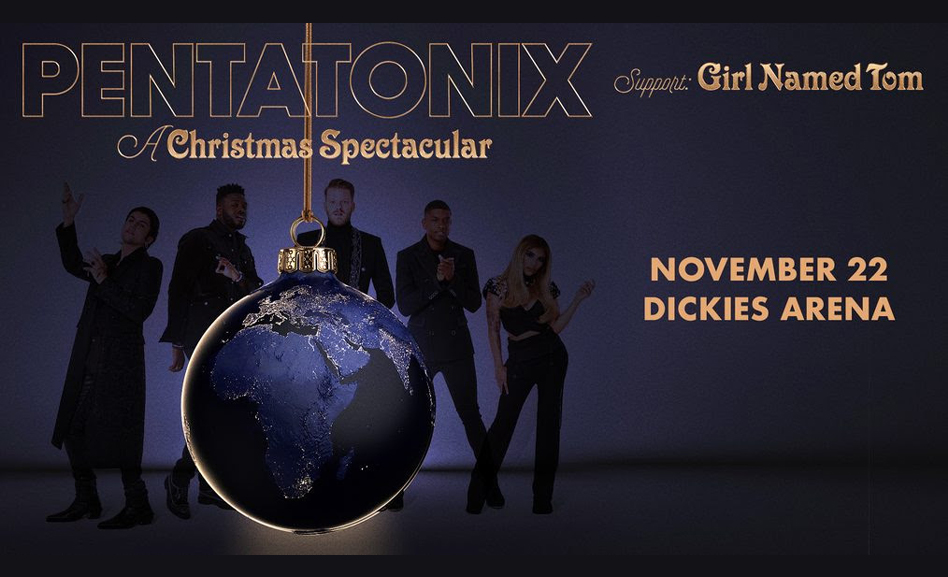 Pentatonix, the award-winning a cappella quintet with its roots in DFW, today announced the 22-city holiday tour, Pentatonix : A Christmas Spectacular, with tickets going on sale Friday, Sept. 23, at 10 a.m. at Ticketmaster.com.

The tour includes a Nov. 22 show at Dickies Arena in Fort Worth, with Girl Named Tom, winner of season 21 on The Voice, as the opening act.

“The holidays have taken on a new meaning for all of us over the past couple of years,” said Arlington native Scott Hoying, one of Pentatonix’s founding members. “We cherish this time of year more than ever. However, we wanted to spread this message as far as possible. That’s why we decided to bridge the gap between cultures and genres in a way we never have before.

Hoying, Mitch Grassi and Kirstin Maldonado met and began singing together as teenagers in Arlington. The group expanded by two members when they decided to compete on NBC’s The Sing-Off, which they won in 2011. Since then, the group — now with Hoying, Grassi, Maldonado, Kevin Olusola and Matt Sallee — has won three Grammy Awards and been nominated for a Daytime Emmy Award. The group has sold 10 million albums worldwide and launched back-to-back Billboard 200 No. 1 albums with Pentatonix in 2015 and A Pentatonix Christmas in 2016.

Pentatonix has also collaborated with Kelly Clarkson (another North Texas native), Miley Cyrus, Lindsey Stirling and others, has appeared on numerous TV shows and in the movie Pitch Perfect 2 as well as supporting organizations such as Make A Wish and Do It For The Love Foundation and more.

The group was featured on the cover of the 2021 issue of Out North Texas (read the interview with Hoying and Grassi here). And earlier this year, it was announced that Pentatonix will be getting a star on the Hollywood Walk of Fame.