On being black AND gay 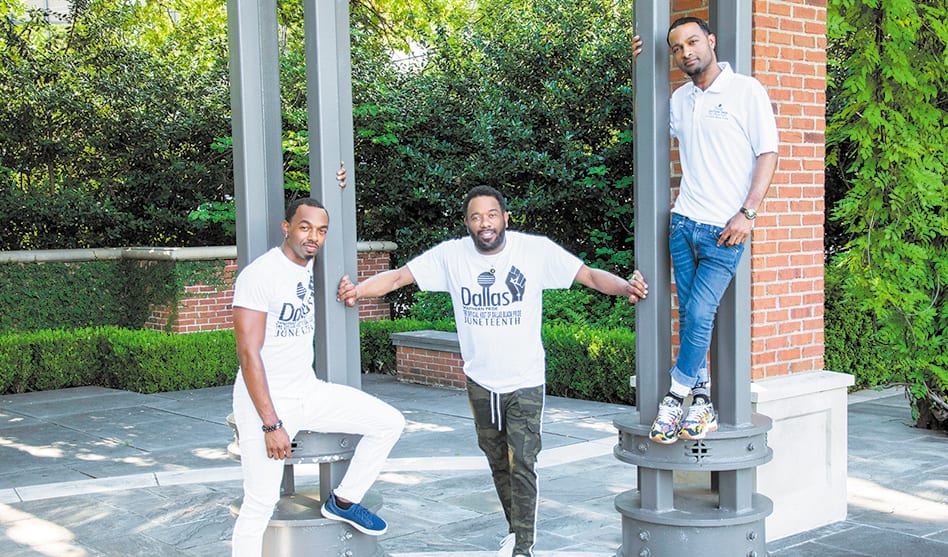 Dallas Southern Pride, the organization that presents Dallas’ huge Black Gay Pride celebration each fall, this weekend presents its annual Juneteenth Celebration, three days and more of parties celebrating LGBT Pride Month and Juneteenth, the commemoration of June 19, 1865, the day that slaves in Texas learned that Lincoln had issued the Emancipation Proclamation two years earlier, freeing all slaves in the U.S.

It is, the three men spearheading the celebration said, a chance for black LGBTQ people to celebrate both sides of their identity in a space where they are valued for both.

“Often times, black folks don’t necessarily have a lot of the privilege in being gay that the white gay community has,” said Kirk Myers, business advisor and lead organizer for Dallas Southern Pride. “It’s easy to segregate yourself away in a gay enclave like Oak Lawn, but black and brown folks often still live in the neighborhoods where they were born.

And [being openly gay] isn’t so easy there.

“The larger [LGBT] community wants you to embrace being gay without addressing the fact that you are also black.

But the thing is, even when you show up [in the larger LGBT community], you are still black,” he added.

P.J. Moton-Poole, DSP’s development director, elaborated: “When you think of the LGBT community at large, it’s important to acknowledge that, historically, the community hasn’t celebrated the contributions of black and brown people in general. At the same time, [black LGBTQ people] were not accepted in the black community.

“So we had to create our own communities, our own programs,” Moton-Poole continued. “And a lot of times, things that the black and brown people started, the white gay men would take over. It was black trans women that started Stonewall, but white gay men got the credit. It’s a cyclical trend. But one of the things that is most beautiful is our resilience: We create something, and then we go on and create something else.”

Black LGBT people fight the battle for acceptance on two fronts, Moton-Poole continued. “The LGBT identity is misunderstood in the larger black community. They see it as a choice, and their religion tells them it is wrong. There are a lot of reasons why the [larger black community and the black LGBT community] could never really merge.

“For the mainstream LGBT community, coming out is often a celebratory thing,” he added. “But for black and brown bodies, it is a point of trauma, an intense life battle.”

Myers, who is also founding CEO of Abounding Prosperity Inc., said he has been “doing work in HIV prevention for more than 25 years now,” and that he was “led to do the work because of my own diagnosis and not having a lot of service providers that looked like me at the time.” His goal, he added, to give others like him the support they needed, to “show them what care looks like and help with navigation issues.”

“I see myself as a bridge, he said. “I am able to move easily between the communities, and I do have a certain amount of privilege. But there are many who don’t have that ease, that privilege. What we are trying to do is give them the chance to live and to present in the way that’s comfortable for them.”

In his interactions with the larger LGBT community, Myers continued, “often times I am asked to assimilate. It’s subtle, of course. They say, ‘You’re gay. You’re queer.’ And I say yes, but I am still showing up black. I am black and gay; I am black and queer.

“Especially in times like these, with our political climate the way it is right now, it is even more important for black LGBT people to have a sense of cultural identity,” he continued. “There are so many attacks on trans folks from all sides, especially black trans folks. Trans people are being attacked by everybody from the president on down. You can only imagine the severity of being black and trans in this environment.

I have seen the white LGBT community fight with the community overall for inclusion and diversity. But at times we [as black LGBT people] aren’t getting that same inclusion from the larger LGBT community,” Myers said. “As welcoming as they think they are, again, you are expected to assimilate to be welcome — to assimilate in your dress, your music, your social norms.”

Myers said that while Dallas is already one of the top five markets for Black Pride, and while Dallas Southern Pride continues to grow, the organizations in place to promote Dallas as a destination for LGBT people to visit or to move to are not making an effort to reach out to the black LGBT demographic.

VisitDallas, the city’s convention and visitors bureau, recently produced a video promoting Dallas as an LGBT destination. That video, however, “didn’t include any black perspective,” Myers noted. “I asked them, what do you think of [popular rapper] Cardi B? They said, ‘Oh we love her. She’s great.’ So I said, then when didn’t you mention in your video that she came and performed for Dallas Southern Pride? They didn’t even know.”

There is, Myers said, “still such a disconnect. It’s inadvertent, well, I’m not going to say racism, but there is a willingness not to acknowledge the black LGBT community. There is still so much structural and systemic racism, and we still all bring our biases into the room with us.”

At meetings of the North Texas GLBT Chamber of Commerce, he noted, “Ahmad [Goree, DSP’s director of public affairs] are often the only people in the room that look like us. And when Dallas Pride decided to move to Fair Park in South Dallas, they never consulted with us. We could have made that an easier transition. It was a chance to highlight even more diversity. But what you had was a bunch of white gays come and take over a non-white community. And no one felt the need to address the community that was already here.”

Finding Pride in other events
While Dallas Southern Pride’s main Black Pride celebration is held each year at the end of September, organizers decided to use an event already popular in the larger black community — Juneteenth — to create a second Pride celebration for black LGBT people. It is a way, Moton-Poole said, for black LGBT people to celebrate their black identity as well as their LGBT identity.

“Juneteenth is motivation for our people to overcome tribulations we currently face by being in unity just with each other, but with everyone — black, white, brown, straight or gay.”

Myers and Moton-Poole explained that the Juneteenth Celebrate as it stands now started out about 12 or 14 years ago as a Unity Pool Party at Myers’ home. When the party outgrew his backyard, they began partnering with other organizations to create a larger, more expansive celebration.

Abbott sent a proclamation honoring the events. “That says something,” Myers said, “for a conservative governor in a conservative state like Texas to do that. It shows how transformative and innovative our efforts have been. We set out to create a unifying event, and we have done that. Now we have people from as far east as New York and as far west as California coming to Dallas to celebrate Juneteenth with us.

“We have given them a reason to come here, and they have come. We are breaking down barriers — internal and external. It proves that you can change hearts and minds and opinions when people are able to come together and experience you.”

Goree concluded: This is a time in our society for all of us to have each other’s back. With all the hate and mistreatment, we must show that we can’t be broken or brought down for long.

“This Juneteenth weekend, we will celebrate our trans sisters that have lost their lives and those who have been abused physically and mentally. We will show that this bigotry has not weakened us but has made us more unified and stronger than ever.”