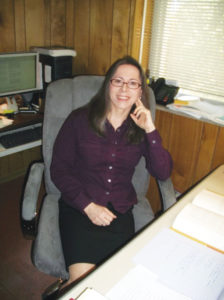 DENIED | Rachel Tudor, an assistant professor of English at Southeastern Oklahoma State University, believes she was denied tenure because of school administrators’ bigotry against her identity as a transgender woman.

Rachel Tudor, who was a tenure-track assistant professor of English at Southeastern Oklahoma State University, was awarded $1,165,000 in a federal lawsuit because of discrimination based on gender identity. A jury found that the university violated Tudor’s civil rights.
Tudor was hired as a tenure-track assistant professor of English by the university in 2004 before transitioning. She was denied tenure in 2011 after some university administrators said her gender identity violated their religious beliefs. Despite her academic qualifications and recommendation for tenure, the university’s dean and interim vice president for academic affairs denied the request.
The case was released from the EEOC in December 2014 so it could proceed to trial. The verdict was delivered on Monday, Nov. 20.
Tudor was able to sue under Title VII, because the Justice Department under President Barack Obama ruled discrimination based on gender identity was gender discrimination. The Trump Justice Department has reversed that.