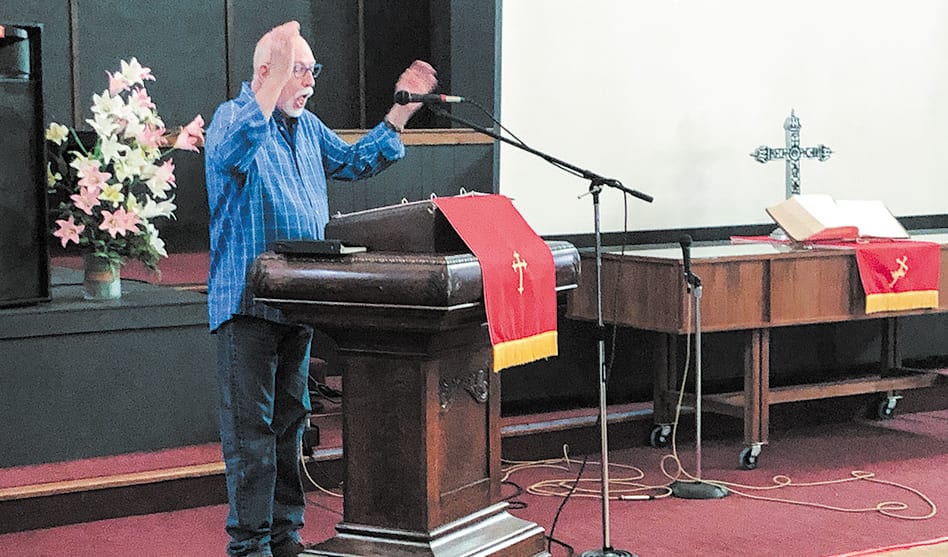 The Rev. Douglas Shaffer at the pulpit, above and Rev. Pablo Guardiola, below. (Courtesy Nick Totin)

WRCC offers an affirming and welcoming ministry in a new location

White Rock Community Church (WRCC) is celebrating the one-year anniversary of its move to a new location in East Dallas and the addition of a new clergy member, the Rev. Pablo Guardiola. Guardiola joined the church to expand its Hispanic ministry and outreach.

Lead Pastor the Rev. Douglas Shaffer, said he had grown weary of the common approach he has witnessed of adding Hispanic ministry that often creates separation or forces a congregation’s existing style on an outside community.

“A lot of predominately white churches think they’re doing the Hispanic community a favor by teaching them English as a second language,” Shaffer said. “We asked, ‘What does it look like if we teach our congregation Spanish, so that when we’re ministering to people, we can have basic conversations in their own language?’”

“White Rock Church needed someone to go out into the Hispanic community and begin to build the bridge between their community and this church,” Guardiola said. Every Tuesday evening church volunteers prepare dinner, and Guardiola offers a conversational Spanish lesson to members of the congregation and anyone else interested in learning the language.

The church now uses a space they rent from the Owenwood United Methodist Church, in Eastwood Hills on John West Road, in a predominantly Hispanic neighborhood. Shaffer described the area as lacking in availability of fresh food and produce, and said he saw an opportunity for the church to help the community they now serve. 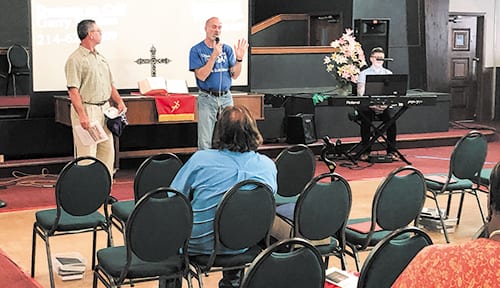 Guardiola recognized the needs of this community and helped facilitate a connection between the North Texas Food Bank and WRCC.

“We’re in a food desert,” Shaffer said, “and [last Saturday] more than 100 households got fresh produce from us working collaboratively with another non-profit.”

WRCC’s move to a new location has given the church the opportunity to expand its community outreach programs, too.

“The church realized that maintaining a sanctuary the size [of the church’s former facility of Garland Road] was just too much cost. But we’ve always wanted to be a church in our community,” Guardiola said.

The high cost of maintaining the building made it difficult to continue the community work the church was committed to doing which led to the decision to sell their building. “Now we are able to work in their community with the loosening up of the financial burden of the old building,” Guardiola said.

Although adding Guardiola to the pastoral staff meant an expansion of the Hispanic ministry, WRCC has a long-standing tradition of serving the LGBTQ community. And the church offers services and support to the community of people living with HIV through its Friends Ministry.

“We serve a hot lunch to the community of people living with HIV and offer a dry goods store that goes beyond what most people get from regular help,” Guardiola said.

While all are welcome, the congregation is mostly comprised of members of the LGBTQ community. Guardiola, who identifies as a straight male, has experienced issues with his previous denomination over his affirming approach to the LGBTQ community. Ultimately, joining WRCC offered Guardiola the chance to minister to everyone, regardless of their community or background.

“This is not a gay church or a straight church; this is God’s church,” Guardiola said. “People like to try and dictate what church should look like instead of working to make their church look like their community.”

Happy for the welcome
Two members of the congregation, Jen Spivey and Devyn Box, the church’s organist, are engaged to be married soon and are thankful to have a home church community that welcomes them.
Spivey has been attending the church for more than a year. She says what sets WRCC apart is the church’s mission to go out and meet the needs of the community they serve through its food bank and Friends Ministry programs.
“As people see that, they see who we are as a church and what we believe church can be,” Spivey said.

For Spivey, WRCC is a place where she can live congruently and not have to separate her faith from her sexuality.

“I wrestled with this thing that I knew was a part of me and my faith,” Spivey said, “so I think by having churches that are affirming and are willing to say you can honor and serve God was really valuable to me.”

White Rock Church offers worship service on Sundays 10:45 am and Bible Study classes Sundays at 9:00 am and Wednesdays at 7:30 pm.