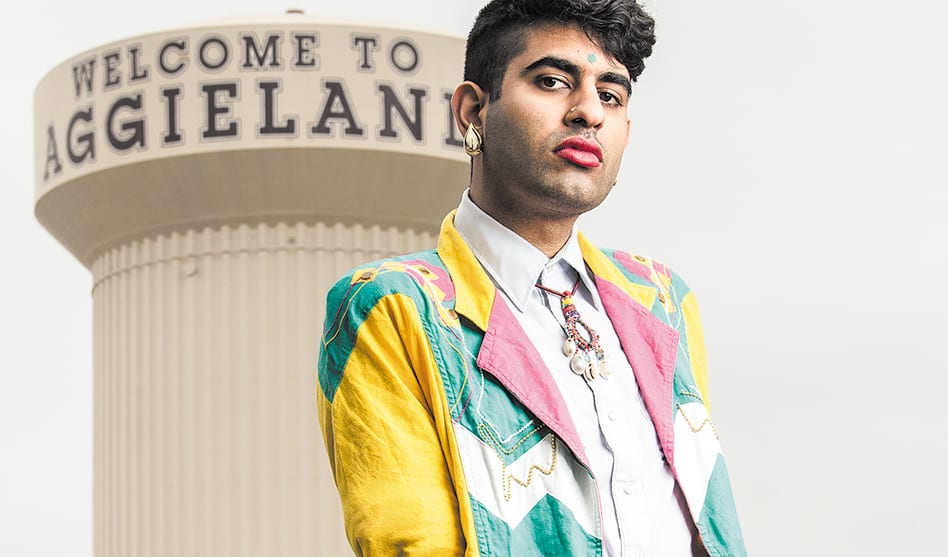 Transgender performer and media personality Alok Vaid-Menon is commemorating the 50th anniversary of the Stonewall Riots with a Pride Party in their hometown of Bryan/College Station, home of Texas A&M University, today (Friday, June 14).

The party will take place from 8-10 p.m. at Halo Nightclub in downtown Bryan. Other performers from across Texas are also slated to appear, including P1nkstar, Y2K, Brock Bottom, Target, Lagniappe, Colby Calhoun, and Infinity. DJ Aracely Manterola, “the only drag queen DJ in Texas,” will provide the music.

Brazos County Precinct 4 Justice of the Peace Celina Vasquez, an LGBTQ advocate, will also speak briefly at the event.

Everyone age 18 and up is invited to attend. There will be a $5 cover charge at the door, and proceeds from the event will benefit local community organizing groups Young Dems BCS and Transcend, a student group at Texas A&M

Noting that they were bullied frequently while growing up in College Station, Alok Vaid-Menon said, “In the 50 years since Stonewall, Pride has become recognized in urban spaces on the East and West Coasts, but it has yet to really reach many rural areas in the South where queer and gender-nonconforming people still often live in fear of expressing their authentic selves.”

Stephanie Koithan, president of Young Dems BCS and organizer of the event, said, “The situation is dire for trans people in the South, especially trans people of color. Much has changed since 1969, but the recent murders of black trans women Muhlaysia Booker and Chynal Lindsay in Dallas remind us that, sadly, too much remains unchanged.

“It’s important to come together and show our support for the local LGBTQ community,” Koithan added.

Koithan said, “Young Dems BCS exists to channel the ideals and energy of young progressives into sustainable activism infrastructure, serving as a bridge between campus and community activism and empowering young progressives to participate in the political process.”

Transcend works to meet the needs of the growing population of students on the A&M campus that identify in the transgender, bi-gender, agender and gender-nonconforming spectrum. It serves as a support group for these students to connect with allies and others that identify as they do.