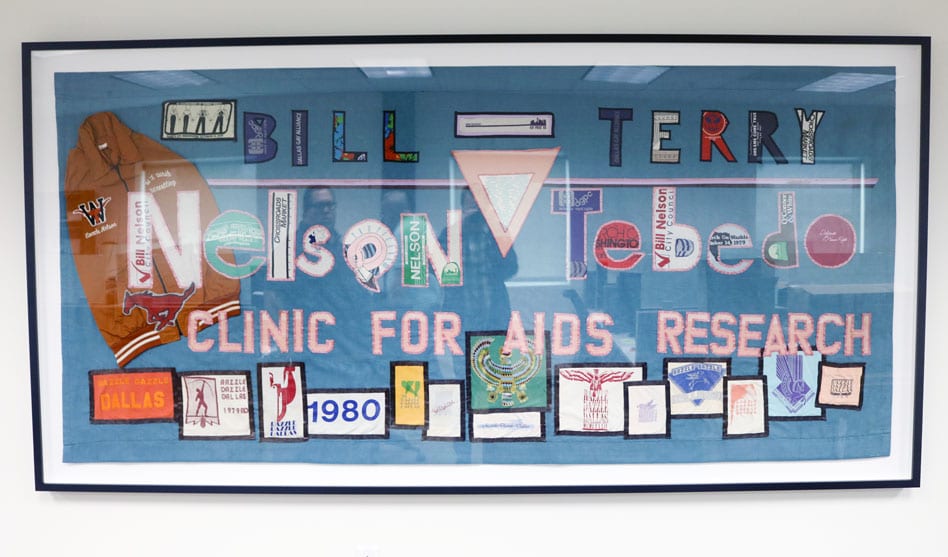 Resource Center moved eight memorial triangles and a quilt panel to its new building on Cedar Springs near Inwood Road as a “link to our history,” Communications and Advocacy Manager Rafael McDonnell said. 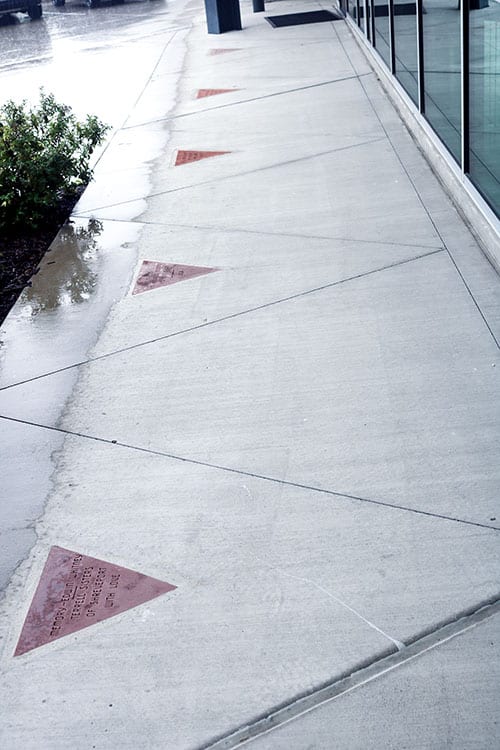 The center sold the triangles in the mid-1990s to underwrite the cost of planting trees around what is now the Simmons Foundation Health Campus on Reagan and Brown.

Resource Center purchased that building in 1990 after its office on Cedar Springs Road was destroyed in an arson fire in February 1989. The building cost $235,000, and the board of what was then named the Foundation for Human Understanding was worried about paying the mortgage on the property. But board Secretary Joe Desmond kept reassuring the rest of the board the mortgage would be taken care of.

As the AIDS crisis grew, so did Resource Center’s staff. Government funding was scarce and every time the board panicked about paying the mortgage as weekly expenses grew, Desmond would calmly reassure them that the mortgage would be taken care of.

Desmond died in 1993 soon after his partner Ken Flanagan. Desmond left a life insurance policy to the center that paid off the mortgage with enough money left over to help make a payroll.

The building and property are now worth several million dollars. One of the triangles moved to the new building honors Desmond and Flanagan.

Bill Hunt was an activist whose last job was with client services at the Resource Center Food Pantry. The sicker he became, the more his coworkers and pantry clients encouraged him to work shorter days to take care of his own health. But Hunt vowed he would die at his desk at the pantry. He didn’t, but he remained a vocal activist until his last days. The triangle honoring him is now at the new Resource Center building.

Don Baker was the plaintiff in a case that resulted in overturning the sodomy law in the early 1980s. The Dallas Pride parade has been held each year in September, since the mid-1980s, to mark the anniversary of the celebration in Oak Lawn Park marking that decision.

Edwin Whitney, with his partner and longtime Resource Center volunteer and board member Randolph Terrell, hosted fundraising parties on Halloween in the 1980s to raise money for needed client services. While most operating expenses in the 1980s were raised through fundraisers and performers at the bars, Bruce Allen Long volunteered his time to Resource Center researching and writing the first grants for the center. Whitney’s and Long’s triangles now are cemented into the walk next to the center’s new building.

The center also moved a large quilt panel honoring Nelson and Tebedo that has been hanging at the Nelson-Tebedo Clinic for more than 25 years. McDonnell said there’s a mystery about the quilt: Who made it?

The memorial quilt panel is larger than those included in the national NAMES Project collection. Those panels measure three feet by six feet — the size of a grave. This panel measures four feet by eight feet. 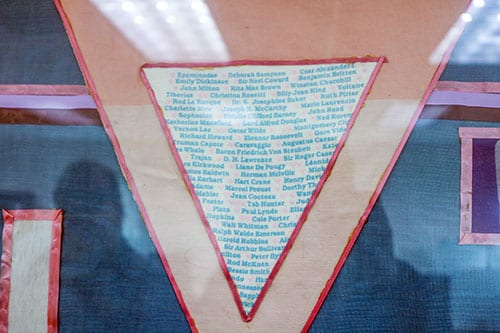 The exact date of the panel’s creation is also uncertain. McDonnell said the quilt had to have been made after Nelson’s death in 1990 (Tebedo died in 1988). Kelly Kawnak began working at the Center in 1992, and he said the panel was already hanging when he started there.

But who made the quilt? Jean Nelson, Bill’s mother, probably had a hand in it. Possibly some of his students at W.T. White High School helped, McDonnell suggested. Nelson kept in touch with a number of his students after he was forced to leave teaching because he was gay.

The quilt celebrates Nelson and Tebedo’s lives of activism through pieces of T-shirts and a jacket.

The bottom row of patches commemorates Razzle Dazzle Dallas, the annual party that they helped found, with logos of the event from T-shirts from 1979 to 1988.

Their names are cut out of T-shirts that remember Nelson’s city council campaign, their neighborhood association, Crossroads Market, the 1979 March on Washington, Dallas Gay Alliance and the Tropicana Party fundraisers and more.

Nelson’s wrestling coach jacket from White is also included in the memorial.

McDonnell said a researcher at University of North Texas, where the LGBT archives are kept, is researching the quilt’s history and asked that if anyone knows more about the history of the quilt to call Resource Center with the information. █