Man on the move 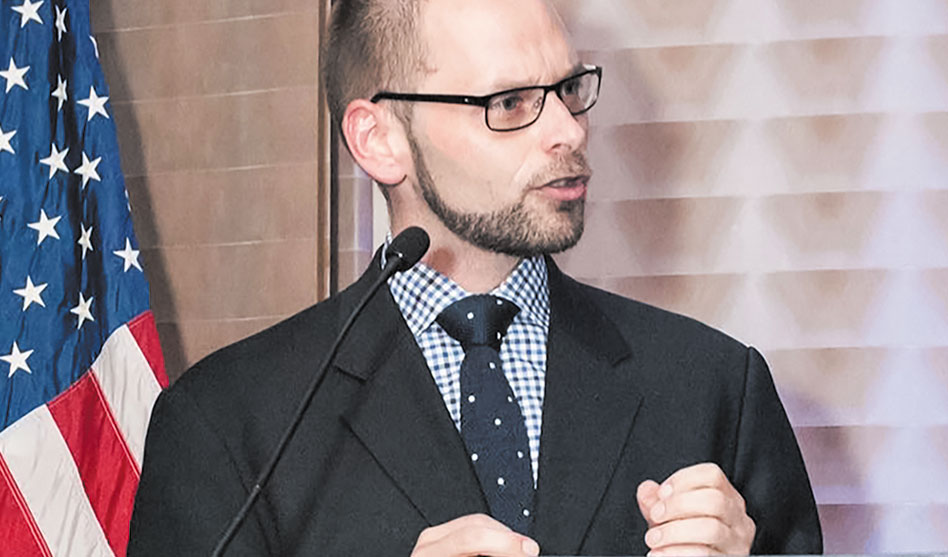 A conversation with Stonewall Democrats of Dallas President Todd Hill-Jones

In a recent interview, Stonewall Democrats of Dallas President Todd Hill-Jones talked about his election as Stonewall president and the political landscape for the LGBTQ plus community. In addition to his new role with Stonewall Hill-Jones has done work with public policy and political affairs committees, too. His background includes experience with The Urban Institute in the Housing Finance Policy Center; founding and running a political action committee and volunteering with, managing and consulting on political campaigns at all levels of government from, city councils to presidential elections.

Anthony T. Eaton: What made you want to be Stonewall president? Have you always been politically active? Oh, yes. I’ve been politically active, and I wanted to be involved in politics since I was young. I’m a recent graduate of the LBJ School of Public Affairs and went through their executive master in public leadership program. A distinguished faculty member, the late Congresswoman Barbara Jordan, used to say at the beginning of her classes “The first most ethical thing one can do is to be on time.”

I looked at Stonewall and our nation, what’s going on, the challenges that we’re facing as a community. As I did all of that contemplation, I thought to myself, you know, what ways can I contribute to mobilizing, energizing and inspiring people? And I looked no further than the Stonewall Democrats. I felt like right now is the time to be on time and show up for history’s calling.

Hearkening to what Barbara Jordan would say, I felt it was my time to try to inspire others to be on time and address what I think are historical challenges facing our community. And I’m thrilled that I did it, that I ran, and that the membership elected me with 72 percent of the vote. We have a lot of work to do despite having allies in Washington, D.C., with President Biden and Vice President Harris.

What sets Texas apart from other states in terms of the challenges we face? We know that we’re surrounded by a sea of red [in Texas] with every statewide office in Republican hands. And, of course, both the legislative branches, the House, and the Senate, are in Republican hands as well. So [Democrats are] still in the minority here. We know Republicans are relentless in marginalizing and legislating their hate against LGBTQ people. I just felt that if not now, then when, and I felt like this was the right opportunity for me to step up and provide some leadership as we moved into 2021.

Despite the Trump administration and his Republican allies going after the LGBTQ community, it doesn’t seem that public opinion amongst Americans has changed. It seems to me that support has held steady, if not hardened over the last three to four years as we’ve been under assault from Trump and his Republican allies. I think all of that bodes well for what’s coming next.

What do you see as the biggest challenges for our community? We’re in Texas; we’re surrounded by a Republican majority at the statewide level and at the legislative level. So we’re under assault. In the current legislative session, we’ve already seen a number of pieces of legislation that are anti-LGBTQ — legislation around transgender teens and criminalizing progress towards transgender teens being able to affirm who they are. You have an HIV criminalization bill out there. There are efforts in the legislature to block LGBTQ families from pursuing foster care and adoption in Texas. And there’s obviously more to come.

So what does that mean for us as we go forward? In this most recent election cycle, we saw a huge amount of folks elected from our community to higher office. It was a record amount — almost 500 plus LGBTQ people that were elected across the ballot in 2020. So that’s great progress, and we need more. We need the next Stacey Abrams to come from our ranks to really help us progress towards turning Texas blue and the other Southern States blue like Georgia. We need to double down on training in terms of making sure that we’re grooming the next leaders.

I will also say we’re fortunate to have an LGBTQ caucus now in the Texas legislature. And in Dallas County, we have two members — Jessica Gonzalez and Julie Johnson — that are members of that caucus. That caucus is going to be important, and the allies that support the caucus are going to be important in pushing back on whatever legislation is filed.

How do you see the future of activism in our community? The north star that we as a community were pushing towards was marriage equality. By 2015, when we finally achieved that really big goal, [we started looking for] our next big achievement. What’s that next big goal? What’s that north star? I think the answer is there are a lot of stars that need our attention. I think multiple things are going on in our society that help align us with other communities and diverse populations.

For example, the Black Lives Matter movement we saw last summer across the nation and here in the Dallas Fort Worth area — a number of LGBTQ people participated in those rallies and protests. I think you’re seeing a blending of diverse communities to help each other out. If we have learned anything over the last four years, it’s that if we work together, we can make progress together. And that makes it harder for our opponents to push back on us, to roll over us.

I think now we’re picking up many causes as a community, not just our own community. For example, income inequality, the pursuit of homeownership, addressing gender wage gaps, making sure that our transgender brothers and sisters have the same justice and protection under the law that we feel we should. We’re bringing a lot of causes together, and we’re working together more. There’s a lot of new tools. There’s a lot of new platforms. So making sure that we’re embracing all of these tools as we evolve and push for these things only strengthens our ability to get the change that we want.

You and your husband are fostering a child right now and are certified to adopt. Have you faced any challenges as you worked through the system and that process? I think we were both a bit surprised with the ease with which we, as an openly gay and interracial couple, were so welcomed. You know, we never once felt sort of ostracized or in any way discriminated against through the process of pursuing foster to adopt certification.

Texas is a good example of a state with a lot of abused, abandoned and neglected children. They need loving homes. LGBTQ families are fully capable of providing loving homes. So, denying LGBTQ families the ability to pursue foster care, adoption, surrogacy or anything of that nature that allows us to build families is only harming children. It’s a disservice to those kids out there that need loving supporting families.

How can people who are perhaps not politically active, but want to do something, want to be more involved in the community get involved? If they are inclined to be involved politically, or even if they’re curious or want a better understanding of politics and the process of how they could sort of plug in, they can check out the

Stonewall Democrats of Dallas at StonewallDemocratsOfDallas.org. There are sister chapters in other counties as well. Tarrant County has one, of course, and Austin and Harris County. The large counties in Texas generally have them. If someone has a political inclination, that would be step one.

Step two, whatever your passion is, get involved. There’s likely an organization that exists for whatever you’re passionate about. Plug in, get information, volunteer your time, make a financial contribution. The third thing is to consider running for something or consider taking ownership of a campaign or becoming a staff member in a campaign to influence policy. Be that candidate who eventually gets to the table to address some of the issues we talked about today. And don’t do it alone; bring your friends. It’s important to make sure that we’re bringing people with us as we get involved so that everyone is working together so we can achieve the same objectives.

What are your future plans? Right now, I’m 100 percent focused on my position with Stonewall. And I always want to lend a hand to the future leaders.