Timothy LeDuc and Ashley Cain-Gribble on the ice. (Photo courtesy of USFS)

The 2019 U. S. National Pairs Champion figure skaters Ashley Cain-Gribble and her queer partner Timothy LeDuc were gliding along into 2020 in fine form. They were looking to defend their national title, with an eye on a return trip to the world championships. The top two finishers at Nationals traditionally are chosen for the World team, and in 2020 two teams were qualified based on the top-10 placement of Cain-Gribble & LeDuc at the previous 2019 world competition.

But uncharacteristic mistakes by Cain-Gribble and LeDuc at the 2020 Nationals left them as pewter Medalists (fourth place), and their dreams of a return to the World competition were dashed. 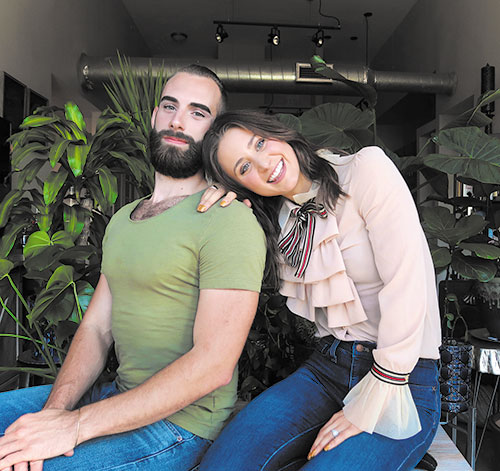 U.S. Figure Skating, the national governing body for the sport of figure skating in the United States, has the right to name who goes to Worlds (other than the gold medalists, who automatically nab a reserved spot). Based on their superior international experience, Cain-Gribble and LeDuc triple-flipped their way past the bronze and silver medalists and were named to the world team (Lemon-lemonade/potato-vodka!).
The 2020 World Championships were set to be an ultra-marquee event. Taking place mid-March in the magnificent destination city of Montreal, all the top skaters were set to compete; the arena was sold out. What could go wrong?

Cain-Gribble (Dallas born and bred) and LeDuc (a native of Cedar Rapids, Iowa) train locally at the Children’s Health StarCenter/Euless under the tutelage of Peter Cain and Darlene Cain (Cain-Gribble’s parents). Prior to Montreal, Team Cain was getting specialized attention in New Jersey at an international team training camp with famed Russian Coach Nina Mozer.

“We were training with many of the top teams that we would compete against in Montreal,” Cain-Gribble recalled. “Every day all the teams came in, were working so hard and putting in all their effort.”

Then the hand grenade detonated. No lemonade. No vodka. Just the explosion heard round the world.

“Then came the day,” Cain-Gribble said, “that the announcement was made that Worlds were canceled. It was almost a blessing, I think, to be surrounded by all those other teams, because everyone understood and felt the same thing. It wasn’t like we were alone in the situation.
“Some of the teams took the news worse than others because it was going to be their first Worlds, and they had worked so hard to achieve the minimal technical score to be eligible to compete,” she continued. “Plus, many were from small nations and had done so much for the opportunity to represent their countries.”

It would have been so easy to let the disappointment define them; some teams retired after the cancellation. But Cain-Gribble and LeDuc are almost preternaturally focused, so it was back home to prepare for what was next to come. 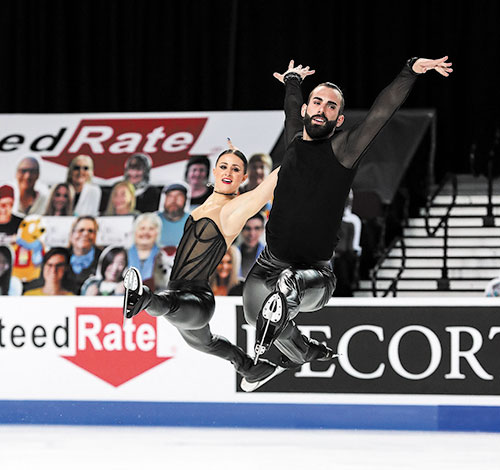 There was no ice in North Texas, but there was the Cain family backyard where they practiced lifts and strengthening and conditioning exercises.
“We did anything we could to move forward,” LeDuc said. “Just because there was no ice didn’t mean that our task was finished. It was interesting and a new experience for us. Actually, it was good for us because we got really strong and put a lot of time into our overall physique, so that when we got back on the ice we were able to move forward very quickly.”

They even roller skated to keep moving.

The “overall physique” work is in obvious evidence. Cain-Gribble (5 feet, 6 inches) and LeDuc (6 feet, 1 inch) have sickening bodies. Often called “the tall team,” they have a gorgeous and commanding presence on the ice. Or in the back yard.

As the days in quarantine grew longer and longer, they continued the forward momentum — still with no ice. “We choreographed the entirety of both our competitive programs on a hardwood floor with our choreographer in Michigan via FaceTime,” LeDuc explained.
During quarantine, they weren’t alone. Cain-Gribble had her handsome hubby, Dalton. And LeDuc had his plants. Yep, he’s a gardening master with a massive verdant thumb, so he tended to his apartment arboretum during his spare time. 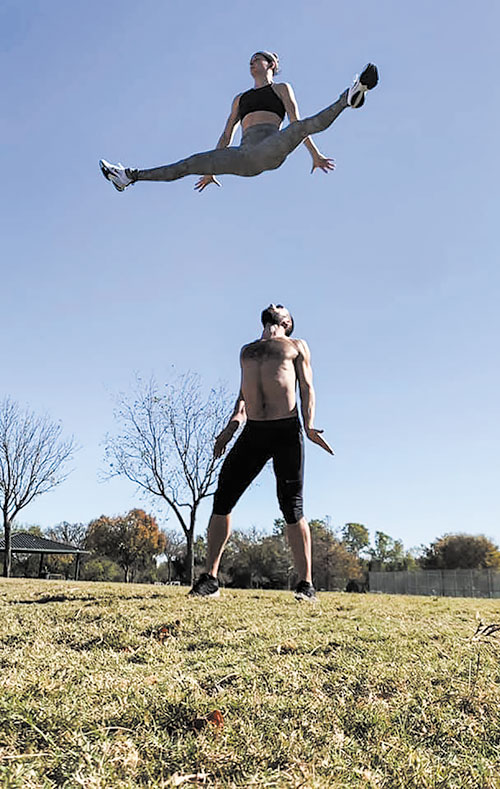 LeDuc and Cain-Gribble used the quarantine downtime to work on their physical fitness off the ice.

LeDuc, a vocal activist for LGBTQ issues, was able to continue his advocacy for DFW-Fuse, a group for gay, bisexual, pansexual, queer and questioning guys between the ages of 18 and 35 in the Metroplex with a mission to foster a safe, healthy, and supportive community. LeDuc also serves on U.S. Figure Skating’s Diversity, Equity and Inclusion Task Force. Ever the passionate ally, Cain-Gribble joins LeDuc on the USFS Athlete Advisory Committee.

The team finally got limited ice time in late May and discovered the hard training had paid off because they were able to land their jumps the first day back. An impressive feat. With impressive feet.

Summer moved forward, and the team trained. There was a little “oops” along the way when Cain-Gribble clobbered LeDuc with an elbow during an exit from a twist lift which earned him a trip to the E.R. and a broken nose. Such injuries are not infrequent in pairs figure skating which is fiercely challenging and most assuredly a contact sport.

Come September, the team had mended enough to compete in a virtual competition where they finished an impressive third. Then in October, they competed at Skate America, which was an impressive accomplishment hosted by USFA in that it was successfully competed in a skubble (skate bubble) at the Orleans Arena in Las Vegas. Following detailed protocols (before and after the event) and working with Orleans Arena Management and local health officials, the USFS skubble brought a contained and campus-like feel to the event where all the people working and competing felt safe and protected.

There were no spectators, but there were fan cutouts placed around the arena, which helped give the illusion of an audience. Both Cain-Gribble and LeDuc heap praise on USFS for pulling off this championship in grand fashion during challenging times and noted that no one got sick as a result of the event.

Skate America was the first time Cain-Gribble and LeDuc unveiled their new routines on a nationally-televised event. For their short program they skated a jazzy/bluesy “Never Tear Us Apart” by Bishop Briggs. Then came their free program, skated to the well-known warhorse, Rachmaninoff’s “Piano Concerto No. 2.” It’s the team’s first warhorse, but they remain undaunted.

“We chose the music,” said Leduc, “because both of us have had such wonderful experiences having watched so many of our favorite skaters have amazing championship-winning moments with this music. We wanted to do it much like an homage to those who have inspired us, but also as a way to bring our own style and uniqueness to this piece.

“We’re really excited to continue to develop the program, and, hopefully, when people hear this music, they will associate it with us as well as the past champions who inspired us,” he added.

Going into the 2021 U.S. National Championships, returning to the skubble at Orleans Arena, Cain-Gribble and LeDuc have kept up the pace with training, and they are confident going into what will be their fifth nationals competition.

“We are leaving no stone unturned in our preparation for these championships” LeDuc declared. “We’re very hungry to be national champions again. We think that we are far and away the best team in this country. We are the most well rounded, the most consistent and the strongest. What we do on the ice, no other American team can do. We want to show that and to reclaim our title.”

It would appear that Cain-Gribble and LeDuc looked 2020 in the face, did a hair-flip and drank a toast to 2021. Wonder if it was lemonade or vodka?

Senior Competition at U.S. Nationals begins Jan. 14 and can be seen on NBC and NBCSN. Check local listings. 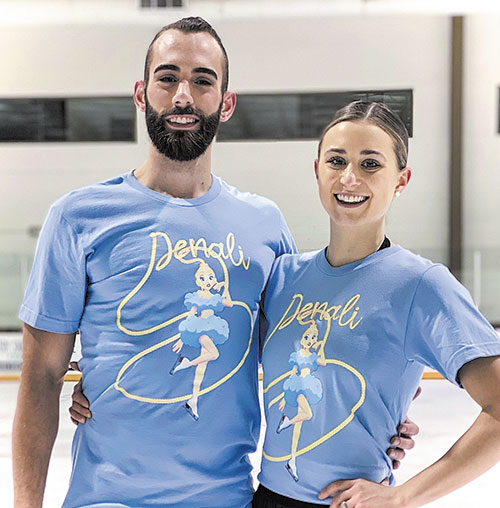 Fun Fact: Cain-Gribble and LeDuc have a good friend who is a skater and drag queen that has choreographed competitive programs for them. His boy name is Cordero, but fans will come to know him better as Denali as he competes on Season 13 of RuPaul’s Drag Race. The first episode kicked off Jan. 1 with an odd new format that is receiving decidedly mixed reactions. But Denali served fab fierceness with a first costume that included, natch, beaded/bangled boots and blades. You go, girl. Good luck, and don’t f*ck it up!