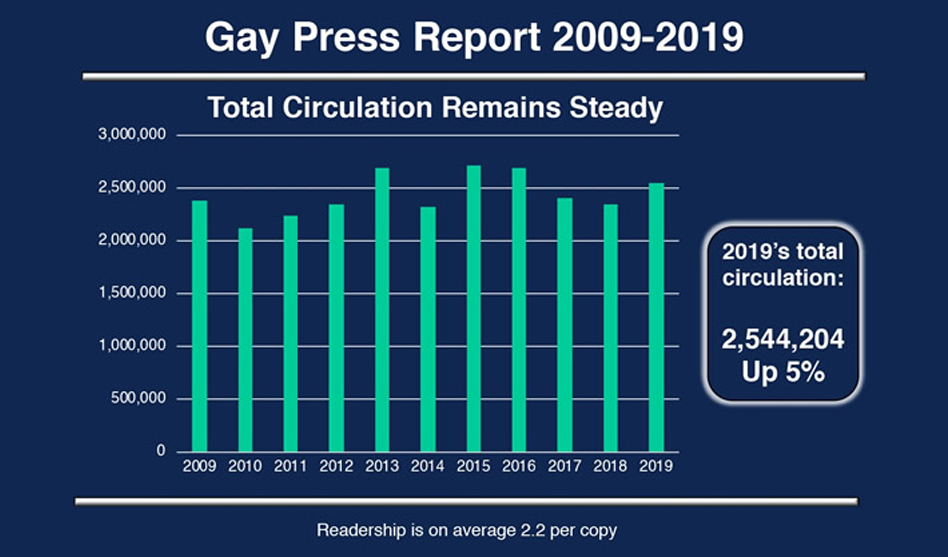 Despite the paradigm shift declared by the Buggles during the debut moments of MTV, video didn’t kill the radio star — no more than the emergence of digital dealt a fatal blow to newsprint. But it did put another arrow in the quiver of advertisers, and gave readers a dizzying array of new destinations.

“The LGBT print press,” says Stevenson, “has a certain level of quality and professionalism. We’re steeped in the ethics that center around publishing, that blogs and online sites just don’t have. It’s been vetted, and there are reputable people standing behind the work.”

Concurring on the matter of credibility is Scott Seitz, who says, “I absolutely believe in digital, but I do believe that digital often does not have the same integrity as print.”

Seitz, whose SPI Marketing LLC counts Absolut Vodka among its clients, notes, “When you have a team of people slapping together a meme or a statement, they’re just checking boxes.”

As a result, says Seitz, “It becomes less and less meaningful. It’s more about, ‘What can I do today to get attention?’ People are doing mechanical stuff, and those people are not necessarily from the [LGBTQ+] community… It’s not being done with a high level of integrity or seriousness.”

Like the connection forged at a mom-and-pop shop that can’t be bought by shopping online, Stevenson says the print format creates a unique bond.

“If someone is running a print ad, it’s an affirmative, on-paper commitment to the community, a message that they want to do business with us,” she notes. “It’s not as fleeting as an online ad, that could be coming from anywhere…. People remember what they see [in print], and have more faith that the advertiser intends for the ad to be there.” With digital ads, she says, “there’s not necessarily a connection between what you see and why it was put there.”

Stevenson says Pride Source Media has “very few clients who do digital only.” Almost all of them do a mix, “and we still have a fairly large contingent that do print only, because they want this market. They know this is where to go to reach the community.”

Although Stevenson says her own publication is actually increasing its circulation, “The print sector continues to be in trouble, regardless of general or niche markets,” observes Mike Wilke, whose AdRespect.org archive of nearly 6,000 LGBT-themed ads date as far back as 1917. “In 2019,” Wilke says, “digital advertising revenues exceeded all traditional media ad revenues.”

“We have a digital world that is constantly wanting print to be dead, and I don’t know why,” says Todd Evans, president and CEO of Rivendell Media.

“The digital-only properties think that would be helpful, yet we estimate 90 percent of LGBTQ digital content comes directly from print products,” says Evans. “So I am not sure where digital would get its content. But print is maintaining its place in a world where there’s a new cog in the wheel.”

Evans and his team place advertisements for the National LGBT Media Association, whose 12 members have a combined estimated 500,000 weekly newspaper and online readers. Nationally, says Evans, there are about 130 LGBTQ-centric publications — most of them serving regional markets, and most of them distributed free of charge. (Dallas Voice Editor’s Note: Dallas Voice, along with the Washington Blade and its sister paper, the Los Angeles Blade, are members of the National LGBT Media Association.)

“Rivendell,” says Evans, “is 40 years old, and we’ve been tracking circulation since we started. We independently verify a publication’s printer’s receipts, so we know our clients are getting what they pay for and, thus have a real insight into circulation figures.”

But in order to create brand awareness that translates into brand loyalty, that market must be ministered to year-round, says Seitz. “We’re in a place where authenticity is over-communicated and under-realized,” he observes. “We have companies who do one quick thing at Pride every year, and then they do nothing else.”

They found that while Pride 2019 “provided a substantial lift to most of the sponsors,” the largest bumps in visibility and credibility “were among brands that didn’t just sponsor Pride, but that have history of directly supporting the LGBTQ community at large. Activations, advertising and promotions were strategically linked, and their history of support and engagement created trust in their messaging.”

“It all goes back to Marketing 101: Impact versus exposure,” says Evans, of the argument for maintaining a year-round presence in LGBT media and via brick and mortar events, rather than “spending it all on a one-shot wonder. Before there was digital, companies started to realize that Pride helped them [with LGBT community relations]. But if you only do that once a year, it’s out of sight, out of mind. One of the reasons Absolut Vodka always comes up, when you ask people about what companies really have our back, is that they stay in the game. The amount of [LGBT media] advertising they do will go up and down year to year, but they’ve always maintained a presence.”

That’s become even more important, says Seitz, “as we see Generation Z going back to being a little more physical, more likely to be out shopping and trying something on, as opposed to buying it online. So I thing we’re seeing the pendulum swing a little. They’ve never not been tactile, but it’s kind of shifting again, and that’s something to be studied and mindful of.”

Citing the strength of a regional publication whose hyperlocal content is a selling point to both the readership and advertisers, Stevenson says “circulation has actually gone up” over the last five years, “because more and more people are finding out about us, and want the papers.”

Many of those people, says Stevenson, are younger, and aren’t just accessing Between The Lines through digital means. One of the newspaper’s largest distribution sites, she notes, is the local LGBT youth center.

“We can’t keep it in stock,” says Stevenson. “As soon as the new issue arrives, it’s gone.”