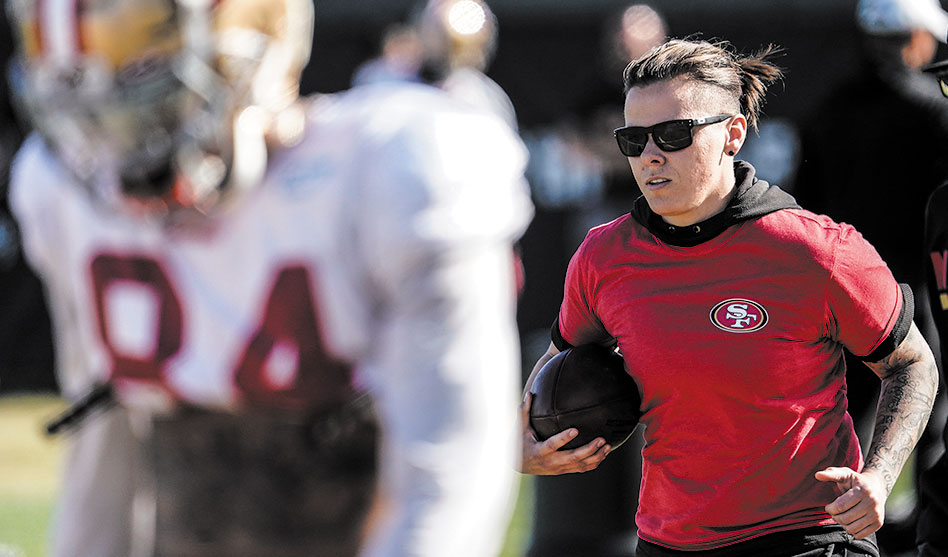 HESSTON, Kan. — The old downtown strip, like so many in small towns across America, is quiet on a brisk January morning, just a few cars parked at one end in front of The Citizens State Bank and a few more in front of the pharmacy at the other.

Around the corner is an old Texaco station, the pumps long removed and the windows covered up. Nearby, the sign for Weaver’s Grocers — “Your local hometown grocers!” — is all that remains from the once-bustling store. Most businesses have moved east toward the main highway, which takes traffic between the cities of Salina and Wichita.

The predominantly Mennonite town of about 3,700 in south-central Kansas is hardly the kind of place one would expect to produce a trailblazing NFL coach, one that has helped the San Francisco 49ers return to the Super Bowl.

Then again, Katie Sowers had been defying expectations all her life.

When the Niners face the Kansas City Chiefs on Sunday, Feb. 2, she will become the first female assistant and first openly gay coach to take the sideline in the sport’s biggest game.

Her story has spread like a prairie fire thanks in large part to a Microsoft commercial featuring Sowers that ran repeatedly during the recent conference championship games.

It’s all a little hard to believe for her family and friends — those who grew up playing tackle football with her in the backyard or coached her in high school basketball or took classes with her at tiny Hesston College.

“People ask me what we did for fun,” recalls her twin sister, Liz, “and I don’t honestly have an answer. We drove to Wichita? But we always had each other. We were never really looking for things to do. We always had a best friend.

“But being in a small conservative town was different, especially being gay. But we were lucky to be in the most open-minded family in town. I love everybody knowing everybody, even with all the small-town gossip.”

The sisters’ dad, Floyd, was a basketball coach at nearby Bethel College. But the kids always preferred the rough-and-tumble of football, gender norms be damned. Even though they were in the heart of Chiefs country, Katie grew up a Dallas Cowboys fan and Liz a Denver Broncos fan, because those were the uniforms and plastic helmets they got as Christmas gifts one year. One of the neighbor boys that played with them had gotten the Chiefs outfit.

The Sowers kids eventually shelved their football ambitions, though, never thinking at the time that they could continue playing with the boys in high school. Instead, they turned their attention to just about every other sport, whether it was basketball or track and field, helping the Swathers — the nickname coming from a piece of farming machinery common on the Great Plains — win enough championships to fill a trophy case.

“Katie was a competitor, [a] hard worker and didn’t like to lose,” says their basketball coach, Brennan Torgerson. “She didn’t break into the starting lineup as soon as Liz did. Katie’s role off the bench was our super sub. When she came in the pace changed along with the energy level of the team.

Her energy and toughness were contagious.”

“She was definitely known on campus for her athletic ability,” adds Rachel McMaster, who overlapped with Katie for a year at Hesston College, and is now the school’s director of marketing and communications.

The Sowers kids never could shake the football bug, though.

After starting at Hesston College where her mother, Bonnie, was the longtime director of nursing, Katie finished her studies at Goshen College in Indiana. She resumed playing football with the West Michigan Mayhem in the Women’s Football Alliance and for USA Football’s national team. But any thought of ever coaching men was temporarily dashed when Katie was denied a volunteer assistant job at the private liberal arts college.

Injuries eventually took their toll on Katie — a separated shoulder, a torn labrum in her hip. So, with degree in hand, she joined her sister in Kansas City and began working toward her master’s degree at Central Missouri.

That is where fate set her on the path toward the NFL sideline.

One of Katie’s part-time jobs was coaching a youth basketball team, and one her players happened to be the daughter of former Chiefs general manager Scott Pioli. He soon became a father figure to her, and when Pioli was fired by the Chiefs and hired as the assistant GM in Atlanta, he helped Katie catch on through the Bill Walsh Diversity Coaching Fellowship.

There, she made such an impression on the Falcons then-offensive coordinator Kyle Shanahan that he asked her to follow him to San Francisco when he was hired to coach the Niners.

At first, she helped break down film and work on practice scripts. But over time she was given more responsibility. These days, she works largely with wide receivers alongside offensive coordinators Mike LaFleur and Mike McDaniel, helping an offense that was second only to the Baltimore Ravens in scoring this season.

Her rapid rise in the cut-throat coaching profession doesn’t surprise those who knew her growing up.

“Katie was an amazing teammate and was always willing to do the little things that allow a team to come together and win ball games,” says Matthew Richardson, who taught and coached the Sowers sisters in middle school and high school. “Katie wasn’t ever concerned with recognition, she only wanted to do her job extremely well so the team could be successful.”

It’s hard to get much more successful than reaching the Super Bowl.

While Katie’s career path led to the NFL, Liz has taken a decidedly different road in the game both love. The women’s team on which both sisters once played recently folded, so Liz has been helping establish a new team — the Kansas City Glory — in the Adidas-backed Women’s National Football Conference. As Katie breaks ground by proving women can coach football, Liz is breaking ground by providing opportunities for women to actually play it.

“I was asked once if it was a dream of mine to be in the NFL or be in a Super Bowl,” Liz says, “and looking back it was like, no, it never crossed my mind. And it’s crazy for me to think as much as I loved playing, and it was our favorite sport, I never thought that was an option to somehow be in a Super Bowl. And it pushes me to continue doing and playing football.

“When Katie is walking down the sideline,” Liz adds with pride, “she’ll have parents shouting that their daughter wants to coach in the NFL, or play in the NFL, and that dream is real now for people, for young girls.”

Nobody is more proud of the sisters than their parents, Floyd and Bonnie.

The couple moved to Kansas City about two years ago, after Floyd suffered a major stroke. It left him in a wheelchair, unable to walk or speak, and Liz has taken it upon herself to help her mother care for him. One of their biggest challenges is transportation, and Liz’s birthday wish was to raise enough money through a GoFundMe account to purchase a van with wheelchair access.

“He was and still is Katie’s biggest fan,” Liz explains, “but he was always so proud to communicate that to everybody, always wore San Francisco gear in public, so people would approach him, and they’d ask about it. So, it’s been hard for him since he can’t communicate. He can’t speak. But I feel like this TV commercial she’s now on, telling her story, in a way it speaks for my dad. He’s so proud to be able to watch that.”

After much discussion, Floyd and Bonnie decided to stay in Kansas City — surrounded by Chiefs fans — to watch the Super Bowl on Sunday. But there will be plenty of family support in Miami: Liz will be there with her girlfriend, and Steph — the twins’ older sister — will be there with her husband, who coincidentally grew up cheering for the ’Niners.

Meanwhile, back in Hesston, a few thousand people who usually spend their Sundays cheering for the Chiefs will have to decide where their allegiances lie. Do they root for the local franchise making its first trip to the Super Bowl in 50 years, or do they root for the hometown kid who has proved that women have a place in professional football?

“I’ll be cheering for the same team Joe Montana said he’s cheering for,” Torgerson says with a smile. “The red team.” 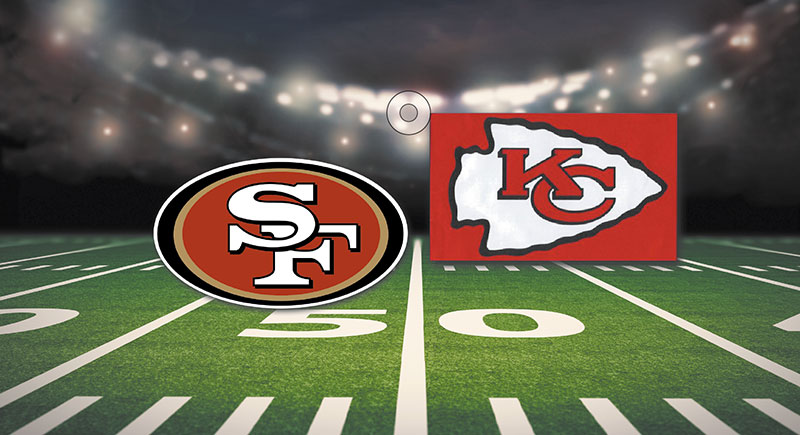 • Katie Sowers, 33, is from Hesson, Kansas. She has an older sister named Stephanie and a twin sister, Liz, who is also openly LGBTQ. Liz Sowers also played for the Women’s Football Alliance, and is now helping establish a new women’s pro football team, The Kansas City Glory, in the Women’s National Football Conference.

• Katie Sowers was a Dallas Cowboys fan when she was growing up. Her sister Liz was a Denver Broncos fan.

• Katie Sowers joined the staff of the San Francisco 49ers as an offensive assistant coach in 2017. When she came out publicly before the NFL season started that year, she became the first openly LGBTQ coach in the NFL.

• Katie Sowers played football herself in the Women’s Football Alliance and for USA Football’s national team.

• In 2016, before joining the 49ers’ staff, Katie Sowers was a training camp coach with the Atlanta Falcons

• Katie Sowers has a girlfriend but prefers to keep her name out of the limelight.

Also of note:
•  Drag queens and RuPaul’s Drag Race alumni Miz Cracker and Kim Chi will be featured in an ad for Sabra hummus airing during the Super Bowl. It will be the first time a Super Bowl ad has featured drag queens.