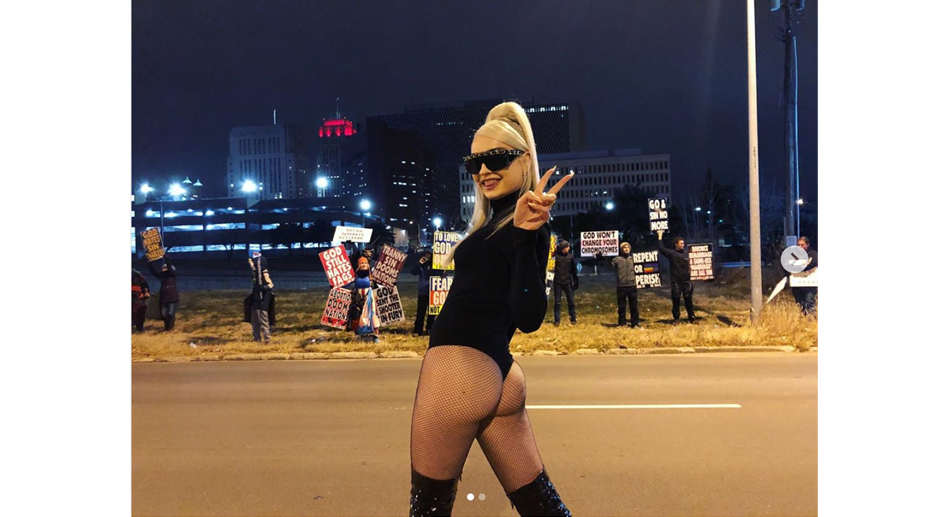 Back in mid-November, somebody trolled the Westboro trolls putting Petras’ photo, along with the words “Call Me Baby” and the phone number of the pop star’s BFF, on four digital billboards around Topeka, where the hate-mongering cult’s headquarters are situated. Most of the billboards were very close to the church itself.

So the Westboro folks decided to get a little payback by protesting outside The Truman, the venue where Petras was in concert on Sunday, Dec. 1. Petras, however, stole their thunder again.

She started with an “official statement” in response to Westboro’s announcement that they would protest outside the concert. The statement was in the form of a brief video clip, which you can see here on Petras’ Instagram, set to the tune “hoes mad” and featuring various videos of the singer at her sassiest, with the words “stay madd, IDGAF” across the bottom of the frame.

Then on Sunday as the protest was beginning, Petras sashayed her way out of The Truman then proceeded to drop her coat and strut and pose in a skin-tight black bodysuit and thigh-high black boots across the street from where the trolls were waving their ever-so-tired “God Hates Fags” signs.

In a statement about the night, Petras’ publicist noted, “Kim’s shows are a safe haven for the LGBTQ community and a space where her fans can let go of their problems and be unapologetically themselves,” and her “response to the Westboro Baptist Church speaks loud and clear for equality and inclusivity.”

We say, Brava Kim Petras! Haters gonna hate, and that is their loss!