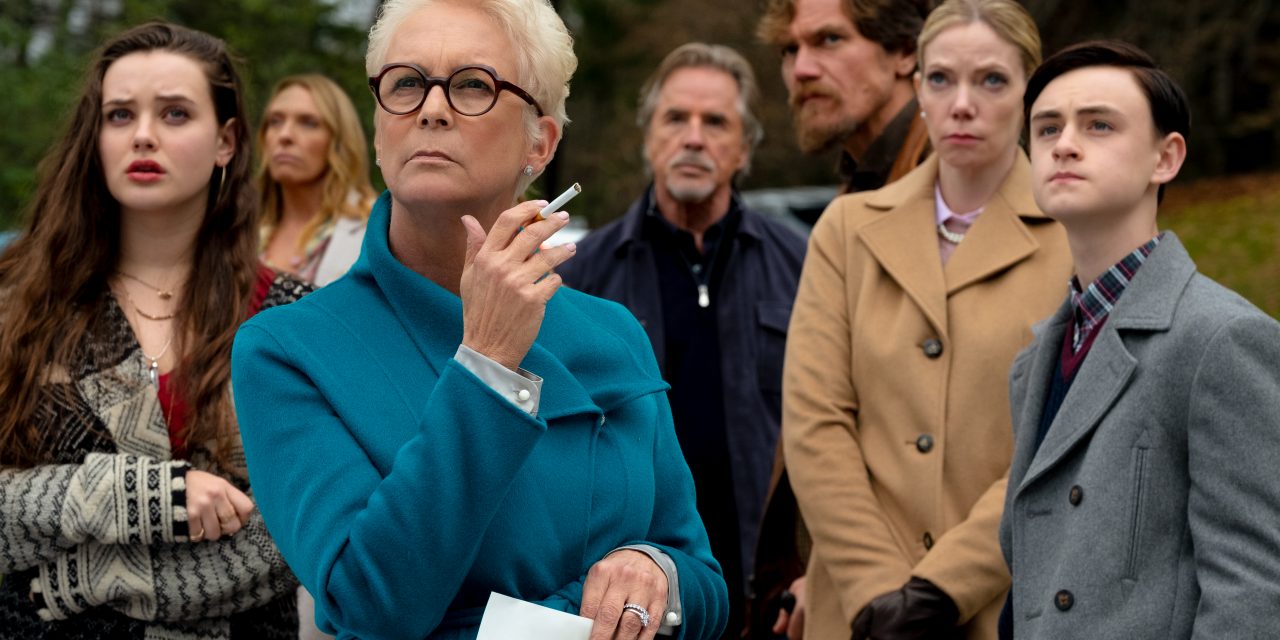 Thirteen minutes with Jamie Lee Curtis was not quite enough time to find out why, even though it was “very important to me” to investigate the sexuality of one of her characters, she’s never considered the sexuality of her most enduring, Laurie Strode. I’m still curious. I still want to know. Jamie, if you’re out there, if you’re reading this, call me.

The day we spoke, Curtis, in signature no-nonsense mode, was fully immersed in a whirl of action at the media junket for her new whodunit film Knives Out, opening today… which left precious time for contemplative states, Laurie Strode gay talk and cheeseburgers.

The esteemed “Scream Queen” is completing her order as she calls me, though “the last thing I’m thinking about is what I’m gonna eat.” Eventually, however, I’ve got Jamie Lee Curtis thinking about that time she decided to make a character gay and no one ever really knew. Minutes into our twisty chat, Curtis, best known for roles in A Fish Called Wanda, True Lies, Trading Places and some movie called Halloween, is reflecting on a role she seems very proud of: her portrayal of the school principal in a film she says “no one saw” called Spare Parts.

Based on a true story, the 2015 film centers on a group of Latino students who win first place over the Massachusetts Institute of Technology in the 2004 MATE ROV robotics competition. Those who didn’t see it, and perhaps even those who did, missed what Curtis calls a “subtle reference” to her character’s late wife, who she says is pictured in a photograph in her character’s office. “I very specifically wanted the backstory — that you will never know — that she moved to that place because of her wife and her wife died,” Curtis says.

Knowing that the actress used her ally powers to queer one of her characters, I’m curious if Curtis delved similarly into Laurie Strode, who is stalked by madman Michael Myers in Halloween, both the original and its recent 2018 sequel… asking you to forget all Halloween sequels in between. Released in 1978, the horror classic jump-started her career; exploring the effects of lingering trauma in the latest installment lured Curtis back to fictional Haddonfield, Ill., where the story takes place (Curtis will return for two more entries in the undying saga: Halloween Kills, due in 2020, and Halloween Ends, set for 2021).

I point out that one Tumblr page I discovered recently is called “Laurie Strode is gay!!!” (The site even features Pride Laurie Strode icons, with a cartoon Laurie in front of a rainbow backdrop.) Curtis tells me she hasn’t considered Laurie’s sexual identity at all. “No, no,” she says, firmly. Quickly moving on, she leads the conversation into a discussion about the sexuality of public figures, including her own.

“I don’t think it’s anybody’s business what people’s sexuality is, to be perfectly honest,” she says. “I find it like a reverse discrimination.” 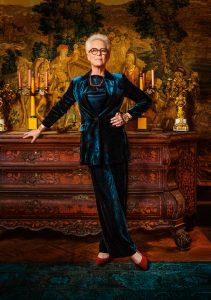 Going beyond the scope of the question, she explains that, “People’s private lives are their private lives and whether I’ve ever kissed a girl — I have not — is irrelevant to whatever advocacy I participate in.” Curtis thinks it’s “sort of destructive cocktail party fodder what people’s sexuality is,” but that ultimately it’s “nobody’s business, it doesn’t matter” … unless, she insists, “you legislate anti-gay legislation but are gay. I fully accept outing those people for the hypocrisy.”

Though not gay herself, Curtis has been a longtime LGBTQ ally since the AIDS epidemic hit close to home, claiming the lives of her good gay friend Rick Frank, whom she starred with in the early ’90s ABC sitcom Anything But Love, and his husband George Lowe, who both succumbed to complications from the virus and, she says, died one year apart. “Rick became, honestly, one of my best friends,” she says, warmly. “That experience with both Rick and George was a galvanizing moment for me, and I have tried to honor him more than anything with trying to keep that focus.”

Though her compassion for the LGBTQ community stems from Rick and George, Curtis’s ties to it go back even further, thanks to the passel of gay friends and colleagues surrounding her legendary mother, Psycho actress Janet Leigh (Curtis’s also-legendary father, Tony Curtis, star of early-drag romp Some Like It Hot and featured in The Celluloid Closet, was also noted for having close friendships with gay men).

“Her makeup artist was gay, the playwright that she did a play with was a great friend of our family who was gay,” she says. “I did not know any gay kids growing up, but I was propositioned in school once by a girl. I was at boarding school and I remember I rejected her advance and, you know, that didn’t go well. She made a point of making that an issue for me at school a little bit.”

But even as a straight woman, who has been married to Best in Show mockumentarian Christopher Guest since 1984, “You don’t have to have your own experience in order to feel compassion and the need for justice and equality. In the LGBTQ world, certainly I have friends and family, but I don’t have to have the direct experience in order to feel the compassion that I truly feel for acceptance and equality in all areas.”

She has acted accordingly, participating in a variety of LGBTQ causes and projects. In 2012, alongside Brad Pitt and Martin Sheen, Curtis portrayed Sandy Stier, one of two women who went to the Supreme Court to defeat Prop 8, in Dustin Lance Black’s play 8. Four years later, in 2016, Curtis was one of many stars who shared stories of the people killed in the Orlando Pulse nightclub shooting for a Human Rights Campaign-produced video. And earlier this year, Curtis appeared in another video for the HRC’s launch of the Americans for the Equality Act public awareness and advertising campaign.

Her LGBTQ advocacy will soon translate to screen, as Curtis has purchased the rights to author Sara Cunningham’s self-published memoir How We Sleep at Night. The book tells the journey of Cunningham, a Christian mother, as she learns to accept her gay son. Cunningham is now the executive director of “Free Mom Hugs,” a non-profit offering LGBTQ outreach and support to LGBTQ youth, an organization she founded. As for the movie: “We’re in the final script,” Curtis told me, otherwise tight-lipped, “and then hopefully we will be making it next year.”

On TV, she’s also defended the LGBTQ population with her bare fist. Her role as Dean Cathy Munsch in Ryan Murphy’s Scream Queens featured the actress in a politically charged moment, her character beating up an attacker dressed in a Justice Antonin Scalia mask. While Curtis throws a steady stream of punches at his face, she gives him a piece of her mind, insisting with fiery conviction that, “The homosexual lifestyle is not destructive to the fabric of American society!”

As for using her art as activism to spur social and political change, Curtis says, “I’m happy to represent whatever aspect of hope someone will take from anything I do, be it something I write, something I say, a part I played or, most importantly, the ‘being Jamie’ in the world. If that ends up being something that is helpful, that is then a reason to be alive; to be hurtful would be a tragedy for me. It would kill me to think that I’ve hurt someone with an action or a word or a deed.”

If you take away anything from Knives Out, a feel-good murder mystery featuring Curtis as real-estate mogul, bullshit-calling Linda Drysdale-Thrombey, whose father Harlan (Christopher Plummer) is murdered at his 85th birthday bash, it’s who the film’s real gay icon is. Some on the internet have already given the title to Toni Collette’s high-camp character Joni, the widowed step-sister to Linda and Walt (Michael Shannon), because she speaks in Valley Girl uptalk and owns a silly lifestyle and wellness brand called Flam, which, according to a branding video, is “more than a word, it’s a way of living.”

But Curtis wants to redefine the very broad qualifications of a gay icon, it seems — beginning with taking a good, hard look at why women with children fall into that category. (This would exclude, of course, famous moms like Madonna, Cher, Britney Spears, Judy Garland, Diana Ross, Barbra Streisand, Beyoncé and Mariah Carey.) “Why does Toni Collette’s character have to be a gay icon?” Curtis objects. “I don’t understand that. She’s a heterosexual woman who has a child. She’s not gay. Because she’s flamboyant?”

Passionately speaking on the subject, Curtis posits that the true gay icon in Knives Out is Marta Cabrera (Ana de Armas), Harlan’s devoted caregiver, “because she’s kind. You see, embracing LGBTQ issues, the root of it is kindness,” she explains. “Not clothing or lifestyle. The root of acceptance of a human being is kindness and the kindest person in Knives Out is Marta Cabrera. I would hope what LGBTQ people focus on is whether someone is kind and loving and inclusive and expansive versus rigid, cold, judging and hateful, and that is, to me, the dividing line.”

Gay icons of the world, Mama Jamie has her eyes on you.