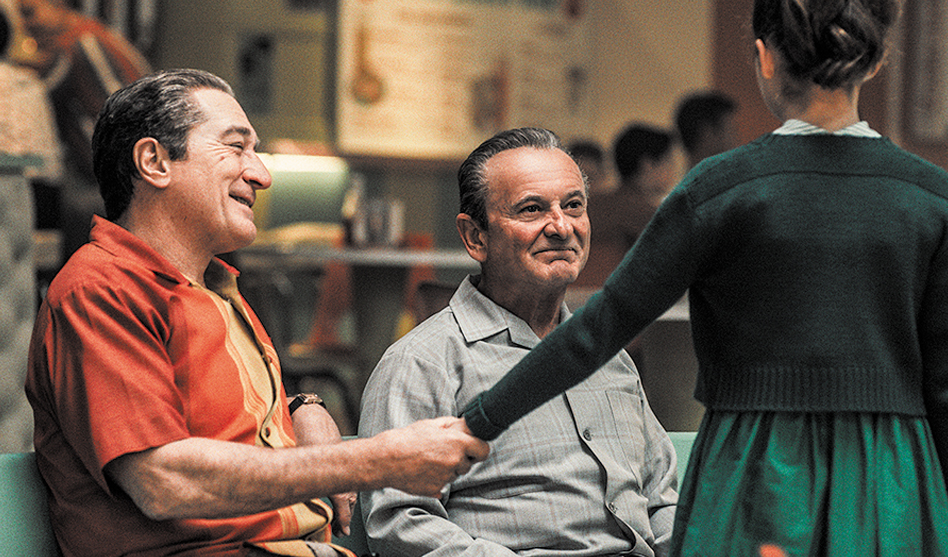 DeNiro and Pesci reunite with Scorsese… but to what end?

Mob drama ‘The Irishman’ misses its mark; ‘Knives Out’ digs in

You’ve probably heard that Martin Scorsese has reteamed with Robert DeNiro and Joe Pesci, and finally directed Al Pacino, in a new epic feature film named The Irishman. Well, I’m here to say you’ve been lied to. Because while it’s long, it lacks a sense of epic sweep; and while it’s being released in theaters, it feels like it will be more at home on Netflix, where it will settle in at the end of the month. And anyway, it’s not really a “film;” it’s a wake — a cinematic eulogy for great artists whose time has passed. A farewell. A memorial. An obituary.

I take no satisfaction in reporting this. Individually and collectively, these four men are responsible for transforming cinema, especially the mobster genre.

They are responsible in varying degrees for The Godfather Saga, Goodfellas, Mean Streets, Taxi Driver, Casino, Raging Bull, Heat and Gangs of New York. Any one of those would be a career achievement. They each have Oscars. There’s cred there within the genre … hell, in the entire frickin’ medium.

But The Irishman, which clocks in a three-and-a-half hours comes off neither as an apotheosis, nor even a fitting swan song. It feels more like the last reunion of old soldiers who have told their stories so often to each other they no longer feel connected to them. They know the glory days are behind them, and there’s no fondness left, just regret and sadness.

You could say that is the theme of The Irishman, which tells the true story of Frank Sheeran (DeNiro), a Mafia hitman who late in life claimed to have killed the long-missing union leader Jimmy Hoffa (Pacino) in 1975. But somehow the theme undercuts rather than enhances the moviegoing experience. Hoffa was 62 when he died, and Sheeran — who lived another 28 years — was 55 at the time; Pacino is now 79, and DeNiro 76. The film uses CGI to trim the years, and while the technology is effective, the fact it was done only emphasizes the pointlessness of this film at this time. Why employ way-too-old stars instead of casting, say, Edward Norton and Stanley Tucci? Why, also, saddle them with a rangy but deeply unsatisfying screenplay to rattle around in, within giving the story a sense of scope or grandeur? Because streamlining is not the goal of a memorial service; catharsis is.

The running time isn’t overwhelming — five of Scorsese’s last seven films have run more than two-and-a-half hours — but it also isn’t justified. Although The Irishman spans roughly six decades, there’s a smallness to the story. There are no interesting supporting performances, especially among the women. There’s no momentum that whisks you inexorably to a conclusion. (Pacino doesn’t appear until 45 minutes in and is gone with 45 minutes to go, so Hoffa is a supporting character in his own murder.)

Let’s not kid ourselves: Mediocre Scorsese is still shoulders above the best Michael Bay; and while Pacino seems to be doing more Big Boy Caprice from Dick Tracy than he should, he’s a smooth operator. But the draws are the return to acting by Pesci and the reuniting of DeNiro with his signature director. (They haven’t worked together since 1995.) That might make for an interesting think piece in The New Yorker, but it can’t sustain a film as modestly ambitious but as full of self-satisfaction as this one. It feels, sadly, like watching your parents’ neighbors show slides of life in the old neighborhood — respect must be paid, but the genuine benefit is minimal. 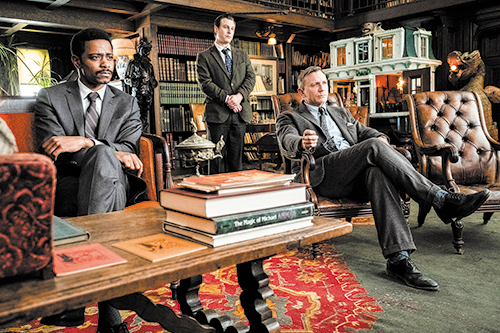 Lakeith Stanfield and Daniel Craig investigate a death in the delicious mystery ‘Knives Out.’

On the opposite side of the spectrum is Knives Out, an old-fashioned locked-door mystery buoyed by its all-star cast.

Mystery novelist Harlan Thrombey (Christopher Plummer) is discovered the morning after his 85th birthday party — his carotid slit in an obvious suicide. Or was it? His own family members would justly be described as cutthroat: A scheming daughter-in-law (Toni Collette), an imperious daughter (Jamie Lee Curtis), a craven, incompetent son (Michael Shannon), a volatile grandson (Chris Evans). His seemingly innocent nurse (Ana De Armas) has no motive… does she? Locked-room whodunnits like this have dwindled as a genre, but, like the remake of Murder on the Orient Express a few years back, there exists a market for smart, sophisticated thrillers like this one — the film equivalent of game night.

Writer-director Rian Johnson has a sense for the style and panache that sells a tale like this, and he pulls a fast one by revealing, about a third of the way through, who actually used the knife on Harlan… but he leaves more questions to be answered, and litters the lawn with clues, while making some biting observations about one-percenters. The cast has a ball with it, including Daniel Craig as an elegant Louisiana detective and De Armas as the outsider who holds a key to the mystery. It’s the perfect holiday entertainment — an Agathastic jaunt.