The cast of ‘Aladdin’ — reviewed here with ‘Reykjavik’ and ‘Drunk Enough to Say I Love You’/’Here We Go’ — is the hottest collection of hirsute hunks since TBRU.

Inside a Hi-NRG dance club in Iceland, two local men seem to be getting an American tourist liquored up for the prospect of taking him back to their room for sex … and perhaps something more sinister. Across town, a gay couple in post-coital bliss observe a congress of curious ravens (collectively called an “unkindness”) outside their window and suspect they may be spying on them. Later, two women who work at the same bar flirt with each other, but one suspects they have met before.

On and on the scenes role out in Steve Yockey’s sexy, scary, funny play Reykjavik, enjoying a rolling world premiere from Kitchen Dog Theater. Most of the vignettes appear connected only by the city of their setting, but slowly patterns and themes begin to connect. Haven’t we seen those men doing karaoke before? And what happened to the missing raven?

Reykjavik shares some structure and tone from other plays of loosely-connected moments with mythic, supernatural, surreal and goofy connections. How is it the birds send messages to the hotel concierge in Icelandic? Who is that lanky, hood-eyed figure shadowing the young man who has been beaten up? This is a land where gnomes and fairies are considered protected species, if that helps at all.

Part of the thrill is, from scene to scene, you’re never fully prepared for what is coming next. It could be comic or violent, naturalistic or spiritual, but all the pieces fit together in a magnificently queer jigsaw puzzle.

Yockey smartly parses many collective experiences in contemporary gay culture. The first scene, set in a loud bar, is entirely supertitled so we can read what the characters are saying (they themselves have difficulty understanding each other, which is part of the point). Who hasn’t struggled to converse while a little tipsy? Most of us have navigated the shared newness of a relationship and the tiny lies we tell our new partner (and the lies we pretend not to notice from him), or engaged in sexual fantasies, or given over to confessional pillow talk in a moment of woozy bliss. Scene after scene — even the ones of heightened emotion or exaggerated comprehension — strike familiar chords. And then Yockey will pivot quickly, and pull the rug out from under you.

The cast is uniformly engaging (each takes on about four roles), with standout performances by Mitchell Stephens (especially as a twisted rentboy), Aaron Campbell (seamlessly toggling between dangerous psychopath and schlubby john) and Garret Storms (duh) in, well, everything. Director Kara-Lynn Vaeni makes excellent use of Clare Floyd DeVries’ colorful, functional set, and whisks us across the Arctic Circle in 85 joyous, heartbreaking, unnerving minutes.

The appeal of the stage version of Disney’s musical Aladdin (now at Fair Park) is far less tortuous than Reyjavik, but also more satisfying than the current film adaptation in cinemas. That’s almost surprising, since the 1992 animated film inspired both. But the story is more streamlined, the jokes land better and the cast? Well, let’s just say the ensemble of shirtless, bearded, muscular residents of Agrabah is the hottest collection of hirsute hunks since TBRU.

That includes former Dallasite Clinton Greenspan, as the upbeat street thief Aladdin, who inadvertently meets a princess (Kaenaonalani Kekoa), discovers a lamp with a magic genie (fellow North Texan Major Attaway) and tries to reset his life with a little sorcery, all to the tuneful music of Alan Menken. Greenspan is endearingly light, and interacts well with his trio of besties (Zach Bencal, Ben Chavez and Colt Prattes), sans his monkey and with only a cameo appearance by the flying carpet.

But the lion-king’s share of star power emanates from Attaway. Amazingly, he virtually makes you forget about Robin Williams in a way Will Smith doesn’t. After introducing the show with an open-armed welcome, he disappears until just before intermission for the number “Never Had a Friend Like Me,” a show-stopping spectacle that had half the audience members on their feet by the last note. Director Casey Nicholaw — who also directed The Book of Mormon and Something Rotten! with similarly campy brio — knows how to make the musical numbers work by respecting his audience’s understanding of musical conventions. The only downside is that the two biggest numbers — this one and “Prince Ali” — end up being back-to-back, one closing Act 1 and the other opening Act 2, so that the finale is, if not a let-down, at least not the panic button on which to electrify the crowd on its way to the parking lot. But honestly, who cares? With faboo sets, amazing costume changes, energetic dancing and (did I mention?) an attractive cast drawing your eye to every corner of the stage, this Aladdin creates for you a whole new world. 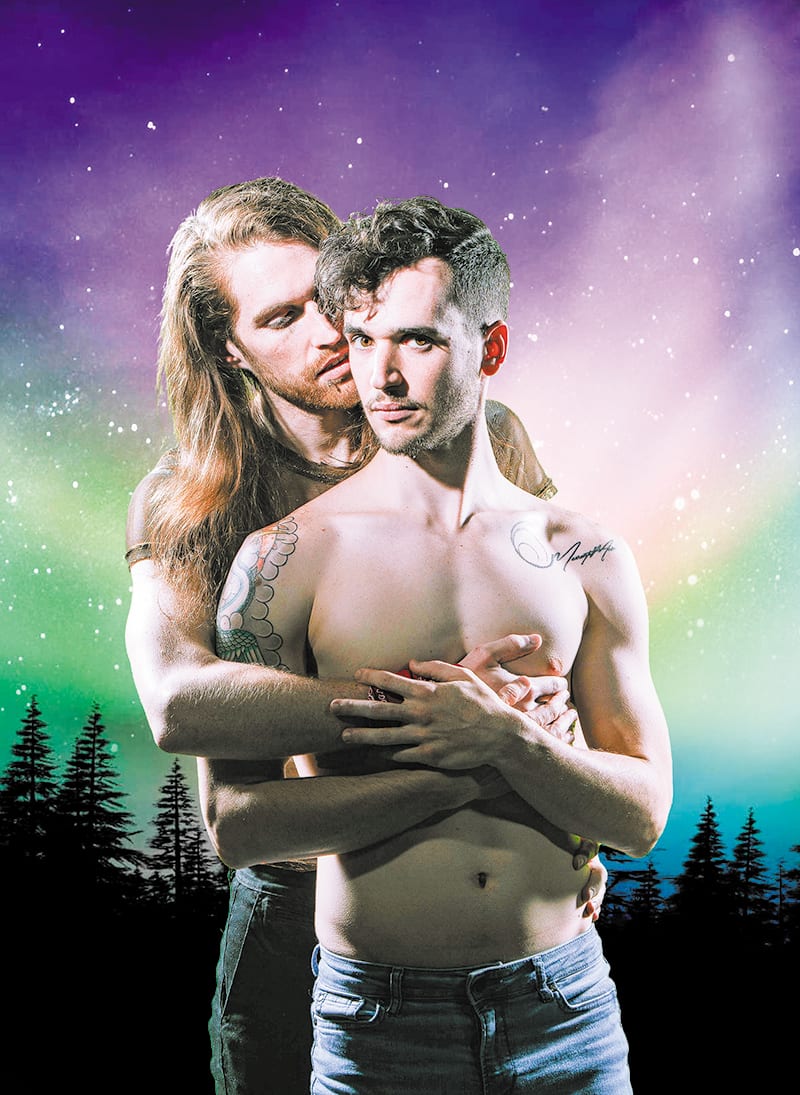 A sexy, surreal trip through the Zeitgayst marks ‘Reykjavik.’

If Reykjavik is edgy and Aladdin is accessible, then the two plays by 80-year-old playwright Caryl Churchill being staged by Second Thought Theatre occupy the far end of experimental. These one-acts — Drunk Enough to Say I Love You? and Here We Go, not written to be performed together, but shoehorned together into an evening of Churchilling theater by director Alex Organ — bend the theatrical form, sometimes to the edge of breaking.

This first appears to be a gay romance between an otherwise straight man named Guy (Blake Hackler) and the seductive Sam (Brandon Potter) who seduces him. But in Churchill’s construct, Sam is actually America, the love affair an abusive one between its rah-rah jingoistic heart and the easily swayed patriot. Sam convinces Guy that, if he really loved him, he’d torture Muslims, secretly carpetbomb Cambodia, prop up South American dictators and spy on fellow citizens. The metaphors aren’t subtle, and they make a point, but maybe one we don’t need to be all that convinced of. The second play is a non-linear journey of a man (Kieran Connolly) from decline to death to afterlife. It starts with mourners at his funeral, each of whom flash forward to their own deaths years (or even days) hence; it ends with the gruesome repetitiveness of routine.

Churchill, as the program notes, is a “playwright’s playwright” — an artist revered by her peers. And she’s written some compellingly surreal plays. But this one-two punch feels less illuminating than burdensome, a dark lesson in the futility of life. Not my favorite way to spend a Saturday night.

Reykjavik at the Trinity River Arts Center through June 30 as the mainstage production of the New Works Festival. KitchenDogTheater.org.

Drunk Enough to Say I Love You/Here We Go at Bryant Hall on the Kalita Humphrey campus through June 23. SecondThoughtTheatre.com.