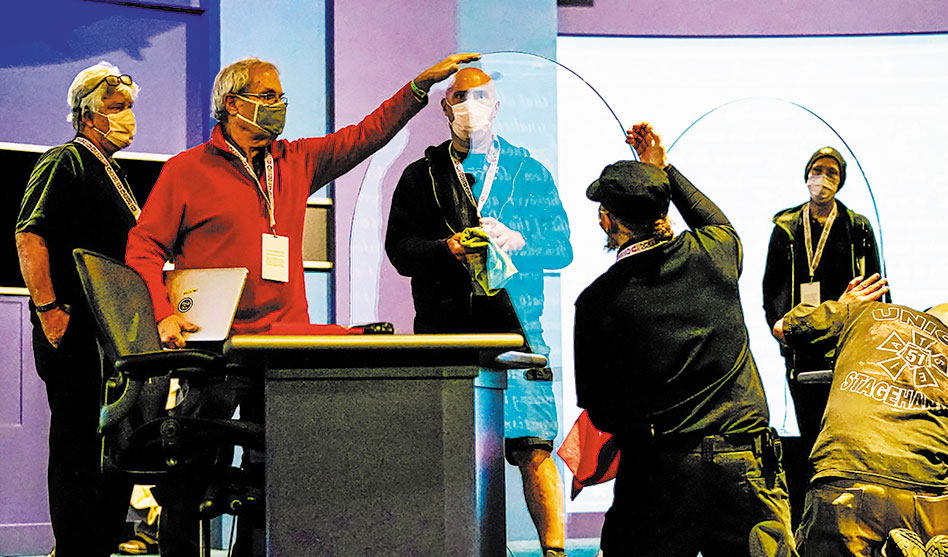 Members of the production crew inspect glass on stage to serve as a barrier to protect against the spread of COVID-19 as preparations take place Tuesday, Oct. 6, for the vice presidential debate at the University of Utah on Wednesday, Oct. 7. (Julio Cortez, Associated Press)

Pence dodged hard questions in the VP debate, and Harris let him

The winner was a random insect that landed prominently on top of Pence’s head and, unbeknownst to Pence, distracted the television audience from whatever the vice president was rambling on about over his allotted time.

Lori Lightfoot, Chicago’s lesbian mayor, posted on Twitter that Harris “brilliantly laid down the hammer on the failed leadership” of Trump. But others said Harris failed to push back at Pence on his claims that she and Biden were planning to “stack the court” with liberals and want to “change the rules” around who should get to nominate a replacement for the late Supreme Court Justice Ruth Bader Ginsburg.

After completely ignoring two questions from the moderator, Pence, in a moment of unselfconscious irony, asked that “the record show” that Harris failed to answer a question.

Later, Pence claimed not to know what Trump’s nominee for the Supreme Court, Amy Coney Barrett, thinks about abortion. President Trump has always made clear that being anti-abortion is a key factor in making his pick.

“Mike Pence is someone who is comfortable saying things that are utterly false with a completely straight face,” Pete Buttigieg told MSNBC.

Buttigieg, himself a strong contender for the Democratic presidential nomination at one time, helped Harris prepare for the vice presidential debate. He debated her in practice sessions, serving as a surrogate for Pence. Buttigieg is not only a proven debater himself, but, as former mayor of South Bend, Indiana, is familiar with Pence, the former governor of Indiana.

“I think Pence speaking over his time and the female host hurt him there,” Tafel said. “I think Harris speaking directly about not raising taxes and not opposing fracking helped Biden with those voters.

“I am not personally a fan of either candidate, but I felt Harris made moderate swing voters more comfortable with her and the ticket. I have a long, antagonistic history with Pence based on his anti-gay rhetoric and find his speaking style smarmy and canned,” Tafel added.

But Tafel also dinged Harris for her “refusal” to answer Pence’s question about whether she and Biden plan to increase the size of the Supreme Court.

“That was a low point for Harris. They need to answer this question,” Tafel said.

Smith said she thought Harris hit Pence hard “on the issues people care about most — the absolute lethal failure to protect Americans from COVID.”

“Vice President Mike Pence needed to score a knockout to change the momentum of the campaign,” Boykin said. “Instead, he repeated empty platitudes and talking points that contradicted the truth about the coronavirus and the economy that Americans have watched with their own eyes nearly all year long.

“In the end, nothing that happened in the debate did anything to move the needle. And that’s bad news for Donald Trump,” he added.
Still Boykin gave Harris high marks: “Going into Wednesday night’s debate, I thought the expectations for Sen. Kamala Harris were unreasonably high,” he said. “By the end of the night, however, she met them. She prosecuted the case against Donald Trump. She defended Joe Biden and her own record. And she managed to do it all while walking a racist, sexist tightrope that holds professional Black women to unfair standards of decorum.”

Buttigieg agreed, telling MSNBC that Harris made a “powerful case.” He criticized Pence for having “tried to create a picture that everything’s fine.”

“He’s perfectly happy to say something that’s not true … and make it sound as if everything’s going great,” he said, adding that he doesn’t think Pence succeeded.

Some political observers said they thought Pence didn’t look well. Pence had recently been on the front row of a crowded White House event to announce Trump’s nomination of Barrett to Ginsburg’s seat. Soon after that event, President Trump and numerous others at the event tested positive for the corona virus, and Trump was briefly hospitalized.

“What stands out to me from this debate was the repeated blatant falsehoods by Vice President Pence,” said Lorri Jean, executive officer of the Los Angeles LGBT Center. “When national leaders lie repeatedly, saying one thing and doing another, it should alarm LGBT people greatly, because it means we are at grave risk.”

“The most ominous content for LGBT people,” Jean said, “was his views on religious freedom, which would completely decimate protections for LGBT people in healthcare, in employment, in the recognition of our families (including the ability to adopt children) and more. That, alone, should have LGBT people running to the polls to support Biden and Harris.”