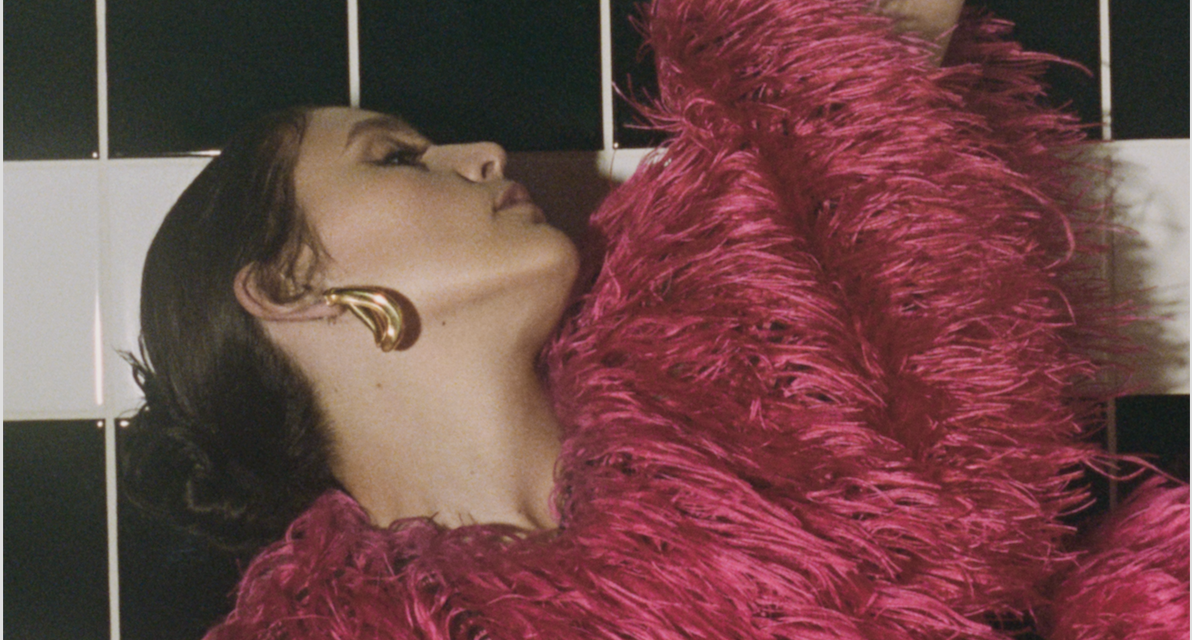 Jessie Ware stans her gay fans. She sees all the rainbow emojis on her Twitter feed, and “definitely a lot of Spanish writing and I don’t know what they’re saying to me but I love it,” gushes the British balladeer turned disco queen. For the first time since releasing her debut Devotion in 2012, Ware feels a major shift, one her glorious soul-escape album, What’s Your Pleasure?, has afforded her. She says all this crazy queer love (rightly so; the album is, right now, the closest thing we have to a COVID cure) has been helping her ride out this miserable pandemic: “We’ve gone global, baby. We’re not just America. We’re not just UK anymore. We are global and I am loving it.”

I connected with Ware recently to talk about a lot of things that were not things I planned on talking about with her. As we near the end of our scheduled time together, Ware says, apologetically, “I feel like I answered nothing,” right after she asked me, randomly, unprompted, without any smooth transition, what I had for breakfast.

For Ware, finding time to prepare a meal with her two children around, I discover, has been a challenge. “This is what I do: I kind of go, ‘Why don’t you go up the hill and go get your hot chocolate, darling, so I can shove a bloody banana bread into my mouth?’”

Recently, Ware managed to steal a few uninterrupted moments to talk about What’s Your Pleasure?, which is drenched in the kind of sensuality that has made at least one gay man stop in the middle of sex to ask what song was playing (for inquiring minds, it was the title song). Even though Ware says she was “knackered” from trying to figure out how to promote an album during lockdown, she mustered plenty of energy to talk about that Grindr encounter and whatever else came up.

Dallas Voice: Take yus back to the day when you told yourself that you’d give the gays everything they want with this album. Jesse Ware: I finished my last show of the last record and I could see my gay fans in the audience. I thought, “You need more energy, and you need more sex and that is what I’m going to give you.” I think it was always in the back of the mind. My gay following has grown, particularly now with this record. But the gay community has always been loyal, so I felt I had to give something back. I wanted to combine fashion, art, dance and music all together in one kind of big melting pot and feel confident and fun and sophisticated and flirtatious. It was really empowering.

I feel like this wouldn’t be a proper gay interview with you if I didn’t bring up your gay brother. Did he have anything to do with how gay this album is? Nope. He absolutely didn’t have any involvement in this. I played him a few songs, demos, and he was obsessed with “The Kill.” But yeah, he was not my soundboard. I guess my kids were.

“Remember Where You Are” keeps me in the day, and in the moment. Honestly, it’s exactly what I need right now. “Save a Kiss” has a different kind of poignancy during this lockdown, and I know it’s bloody hard for you at the moment and it’s a mess, and yeah, that absolutely is about the world going to shit and remembering where you are and who you’re with. And remembering what matters. So yeah, I appreciate that, doll. I’m glad it’s helping you a little bit.

Just hearing you talk about it is getting me teary-eyed. Get a fucking grip. OK, yeah, it is good to cry.

And I don’t even have a question about this song, but I know I want to know more about it. What can you say about that song? I had finished writing with Danny Parker, who is very available and wonderful and also goes by the name Model Child, and we were just having fun and in that relaxed state. We just slowed the vibe and took a different direction. It’s very much a nod to Earth, Wind & Fire and Minnie Riperton and [the musical] Hair. I think Trump had just been over [to the U.K.] and [Prime Minister] Boris Johnson had just got back in power, and we were feeling miserable about it. “The heart of the city is on fire” and this shit is going on and it’s quite a dystopian image of the world. We never could have predicted that we were going to have a global pandemic. This song was kind of a reaction to that. It’s the nearest to a political song I’ve done. I imagined it at the end of an episode of The Handmaid’s Tale.

My boyfriend tells me that he heard that gays are bickering about whether this is a full-on disco album or disco lite. Can you settle this controversial gay debate right here, right now? Jesus Christ. It’s a nod to a wonderful era, but I could never say that I’ve done a disco record because I don’t think it’s right to. It’s an homage and it’s a dance record that’s got many different facets to it. I’m lucky for people to even say it’s a disco record, but I think I have to earn my stripes.

While doing a deep dive into disco for this album, was there something about disco music’s relevance to the LGBTQ community that surprised you? I took for granted the genre of disco and the movement around that. I learned how important it was to the queer community. The significance of a song like Fern Kinney’s “Love Me Tonight” during the AIDS epidemic put a whole different meaning on that song. So I was just kind of absorbing, respecting, and acknowledging it. And also I was watching a lot of Pose.

I bet it was adorable and he loved it. Mmm, not sure. It was slightly overzealous on my part.

I could see him in one of your big wigs. I think that’s the thing: What I love about Billy Porter is that he comes from musical-theater and on this record there were nods to musical-theater and melodrama and all of it. I mean, never trust anyone who doesn’t love a musical, that’s what I say. You know what I mean? I just think, who are you that you don’t want someone to break into song and dance?

You, along with Lady Gaga and Dua Lipa, have been doing your part to save the gays from COVID with disco-esque albums. And Kylie has one on the way. Any theories on this disco moment pop music is having right now? I have no idea what happened and why we all did the same thing at the same time. I mean, they’re all different. They’re all totally different. But it’s really lovely to be among those names. And if it’s giving the gays what they want, that is the most important thing. If only I could sell as many as them though, right? I’m just this little kept secret that I do quite like. Still the best kept secret.

Well, that could change. Getting you a Grammy could and should be the next major gay movement. Can you also do everything in your power to fix my brother up with somebody?

He’s still single? The last time we talked he was single. It’s just like … I don’t understand. He’s a doctor. He works hard. He saves lives. God, what a nightmare for a young gay man.

OK, so honestly, this is my thing with your brother…  I love that you’ve got a thing about my brother. Go on.

He just needs to get on Grindr and tell everyone he’s Jessie Ware’s brother. I definitely think my brother has dropped my number into a Grindr message or two. But who knows. He’ll never tell me. But there was this fan on Instagram who messaged me saying, “Look who I bumped into.” And they messaged me again and said, “A guy was having sex with me last night and I had your record on and he stopped to ask what song this was.” I said, “I’m so sorry, but out of curiosity, which song was it?”

Now that the album has been out since June, how do you sense it’s been received compared to your past albums? It’s been overwhelmingly amazing. I wish somebody would’ve told me that they wanted me to make a disco record a little earlier — maybe I would’ve bloody done it! But it’s been amazing. And it’s just been really gratifying because I felt so in control and so empowered and confident. A 35-year-old woman, making music, feeling like I knew who my fans were, and this is really a credit to my fans that I felt I was making the record mostly for them.

And the reviews have been amazing, and that’s very nice of them, but to be honest, I cared more that my fans were going mad for it. And apart from a few #JusticeForOvertime hashtags — which is like, come on, get over it — it’s been amazing. It’s been exciting. I feel like a new artist.

What kind of reactions are you seeing from the queer community on your social media? There’s some good stuff out there. I mean, the teaser for the “What’s Your Pleasure?” video… it’s big hair! And all my gay fans were commenting, being like, “The bigger the hair, the closer to God.” I don’t know.

You’ve peaked. I’m fucking done. But I think it’s so fun, and I’m very much giving the gays what they want. There was one that made me laugh so much. Somebody wrote, “You, Jessica, need to go to your room and have a think about what you’ve done!” Ha!

I saw one message that said, “Who is Jessie Ware and why have all the gays adopted her this summer? Excuse me. I was always adopted by the gays, thank you very much. Welcome to our club.

Things are so sad and shitty. These comments must be giving you so much life. The humor and the sass and the fact that we have so much fun together, they’re just really egging me on now. Like, I don’t know how big I can get my next hair, but I’d say that was about 12 hairpieces in there, so I’m gonna have to work out what I do on the next bloody thing. I’ve done latex, I’ve done massive hair. I need to think about what I’m going to do next.

I believe in you. Whatever you want, I will do. I am at your mercy.