Inauguration Day is coming; should we be concerned about violence? 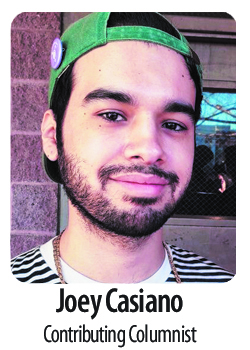 Trump has finally conceded. Yet, many citizens are still nervous about the insurrection on Jan. 6, caused by IMPOTUS himself and the possibility of another attack on Jan. 20, Inauguration Day for President-elect Joe Biden. Especially in the LGBTQ community here in North Texas, we have uniquely steep concerns about security on this historic day.

I had a chance to speak with one of my lovely, dear friends, Claudia Saucedo, and a couple of her friends who are also LGBTQ. Claudia and her roomate, an adorable young man named Kevin, and her charming friend Angel are all nervous about Inauguration Day. As we discussed the details of their anxiety, Claudia made it clear they are anxious because, she said, “Trump supporters are sore losers. They already created a disaster at the Capitol. I’m scared that they will attempt to assasinate Biden before he even becomes inaugurated.

“I have fears about local violence and rioting,” she continued, “but I’m not gonna lock myself down because of these people. I’m not gonna let them control my life. Although I have fears of violence I know Biden won’t be telling these terrorists ‘they’re special’ to him, and I know he would put a stop to any domestic terrorism immediately.”

In Section 1 of the 20th Amendment, it states, “The terms of the President and Vice President shall end at noon on the 20th day of January… .” This means that at noon on Jan. 20, 2021, Donald J. Trump becomes a civilian. If he or his associates were to attempt to remain in the White House, they would then be trespassing.

Also, as Section 2 of the Second Amendment states, “The President shall be Commander in Chief of the Army and Navy of the United States, and of the Militia of the several States … .” That means that Joe Biden will have the authority, regardless of the Joint Chiefs of Staff, to direct the military to forcefully remove any civilians trespassing upon the property of his office. Also he will have the authority to direct National Guards in each state to quell any insurrectionist activities.

Based on the way Trump treated Biden throughout the primaries and the the general election, I have the utmost confidence the operation would be swift and thorough.

There’s another presidential transition that just happened right here in Dallas: Todd Hill-Jones is the newly-elected president of Stonewall Democrats of Dallas, an official PAC for the Democratic Party, and he took office Jan. 1. He’s been in numerous transition meetings with current and incoming board members, and, yes, the former president, Brandon J. Vance, accepted the transition and did not refuse to leave the office — not that he was running again anyway (We couldn’t escape 2020 without about 10 versions of this joke!).

I had a chance to talk with Todd about his thoughts on the U.S. presidential transition, and this is what he had to say:

“Despite the temper tantrums and barriers from Trump and his Republican supporters to an effective transition, I believe it is going as well as it can. I’m not surprised by this, given Joe Biden’s history and experience in government leadership. … Yes, I’m anxious and very concerned that Trump and his Republican supporters are doing lasting damage to our democratic institutions. … Trump has abandoned his constitutional duties as president during this transition, which leaves our nation vulnerable, as we see in the recent cyberattack by Russia that he has done nothing about.

“Biden and Harris are inheriting many fires, most of which were preventable. … [But] I am optimistic about President-elect Biden and Vice President-elect Harris and their leadership in 2021, primarily on dealing with the raging pandemic and the economic fallout from it. As we in Texas are still dominated by extreme Trump Republicans and their policy assaults on us, I think the impact they will have on LGBTQ+ policy will benefit our community as well, meaning, this is a chance to be active, engaged and prepared to lead as a community in 2021. And I feel good about our ability to do that and make a difference given we have allies in the White House.”

Come noon EST on Jan. 20, Joe Biden will be president. He will be commander in chief, and any havoc caused by the fascist supporters of his opponent will be punished and prosecuted. It may be ugly, but we will be okay and the rule of law and the values of our democracy will be re-instated.

Remember that this win is not the end-all-be-all; we still must continue to fight, even in a friendly administration. But on Inauguration Day, no matter what happens, remember we can rest easy knowing we have a logical, level-headed and vigilant president of the United States.