How to dine during a pandemic 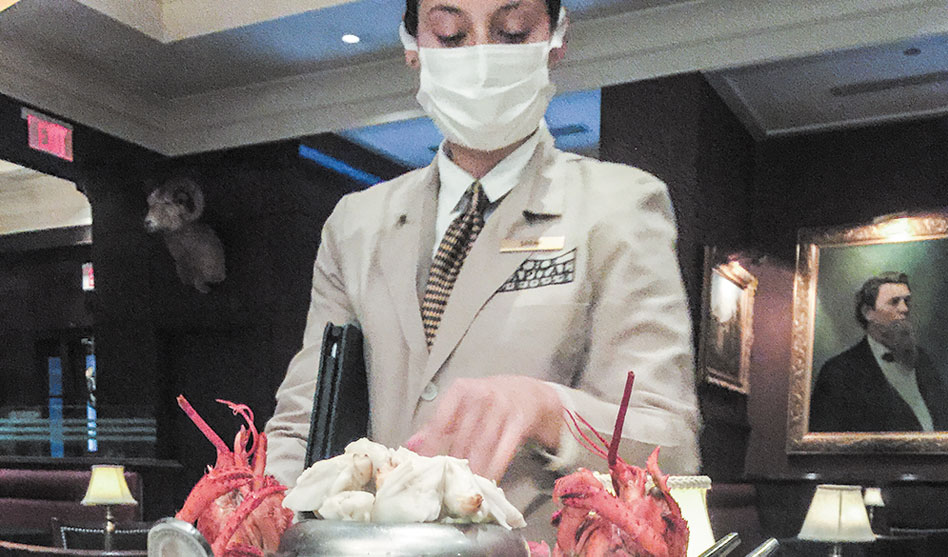 The servers at Capital Grille remained masked during our entire meal, with social distancing among diners scrupulously maintained. (Photo by Arnold Wayne Jones)

With the relaxation of rules concerning restaurants opening, we venture to the new world of eating out

People of all generations have their “I will always remember when” moments: When V-E Day occurred, when they heard JFK was shot, when man walked on the moon, when planes flew into skyscrapers, when one president resigned and a different president actually got elected. For many of us today, one of those might well be “when I last ate in a restaurant seated across from a friend.”

I certainly do. It was my weekly lunch with a friend; it was mid-March; we liked the place, and I planned to review it. And for seven weeks, I had begun to wonder if I would ever get a chance to do that again.

And finally, the moratorium has ended.

As much as “when I last ate out,” I realized I would probably recall even better “when I first ventured out during a pandemic.” 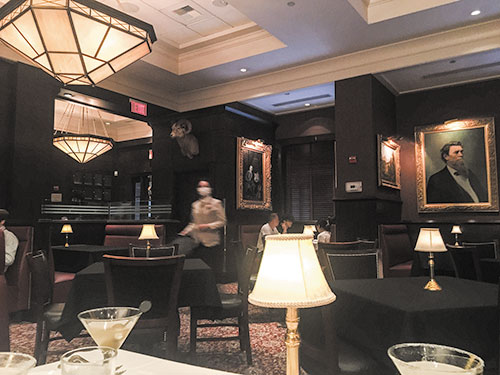 Tables with black linens were off-limits for diners, making it clear how far apart patrons could maintain.

It seemed appropriate that the experiment would be organized by the same friend whom I last dined with. He’s been sequestered alone in his apartment building, itself a veritable fortress against outside contact. He made a reservation at Capital Grille; would I like to join him for this toe-in-the-water testing of social-distanced dining protocols?

I hadn’t planned to explore so early, but a high-end restaurant with a long-quarantined friend seemed like the best conditions in which to baptize.

Ultimately, I’m glad I did. Not only did the ritual of dining out restore an element of sanity and familiarity to this surreality of self-isolation, it also restored my belief that we might actually be able to pull this off.

“Might” is the operative word. Our enterprise could not have been more reassuring, the staff and procedures at Capital Grille all designed to imbue confidence in the system.

The first realization that we are in a new normal was the absence of a valet — unheard of at this kind of establishment. We took it not as an inconvenience, but as a reminder that the rules are evolving. We arrived at the front door wearing facemasks ourselves; once inside, we never saw any employes who were not perpetually covered, from hostess to server to busser.

They were all in good spirits. Nobody complained about anything. When another party arrived behind us, not wearing masks, we quickly shuffled to the far side of the hostess stand. (It’s guests like that, not the restaurants themselves, that concern me the most about the success of reopening.)

The dining hall had the same number of tables it has always had, but we quickly noticed something: Most had black tablecloths; those with white linens were the only one where guests were allowed to dine. Again, this instilled comfort in us — we knew going in where our fellow patrons would be located. The closest table, easily six feet away, remained unoccupied for the majority of our dinner, but otherwise the place was, ummm, “full” — every permissible table blessed with happy, quiet, respectful, hungry Texans.

There were some changes to the process. We ordered cocktails, and they were delivered by the server — not as mixed-and-stirred drinks in highballs, but in individual shakers. Glassware was set down, and our waitress proceeded to shake and pour each cocktail individually. No chance airborne particles would alight into the liquid on the way from the bar. Food was likewise delivered with caution; even the bill was handled safely, and a request for doggie bags was met with containers we could fill ourselves, rather than the typical way the kitchen would wrap it up for us.

We spent the meal with our facemasks off; before getting up after dessert, however, back on they came until we reached the car. We tipped generously; they had earned it.

The meal itself was heavenly — not, perhaps, a surprise (Capital Grille has always delivered on quality; the fritto misto with peppers might be my favorite calamari anywhere), but also a salve: I have spent much of the last two months cooking for myself, and while I am adept in the kitchen, there’s something about pampering yourself — having food prepared that you wouldn’t make at home and without having to do the dishes — that improved my outlook tremendously.

The trick, of course, will be the judicious continuation of restaurant life during a pandemic. My concern with the 25 percent rule has been whether it would be financially viable for the restaurants but also safe for the patrons. I have seen less responsible behaviors on patios since the relaxation of shelter-in-place protocols, and those might promote disastrous consequences. But knowing that it is possible to achieve some semblance of public interaction and support the industry that literally feeds us does more than just fill our bellies. It fills our souls with hope.