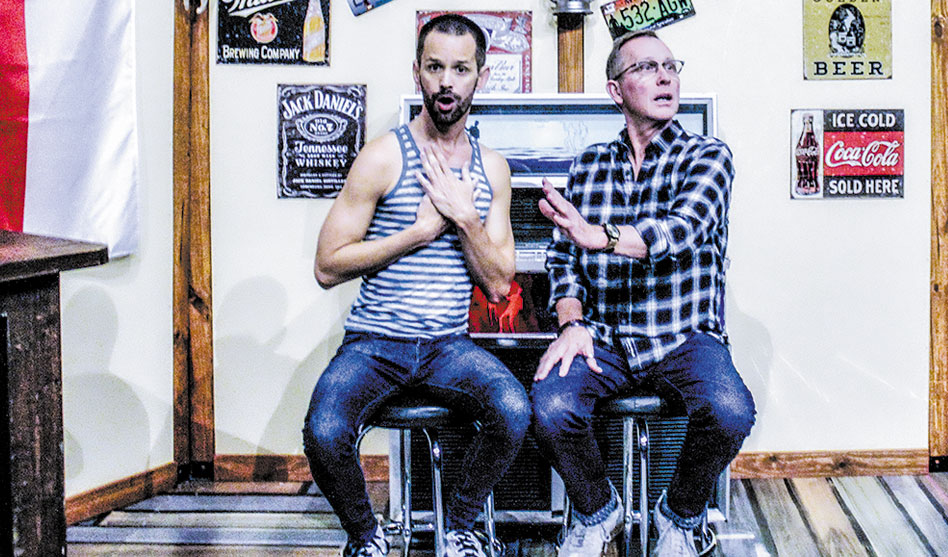 Emerson Collins, left, and Del Shores on the set of Uptown Players’ production of A Very Sordid Wedding.
(Photos by Rich Lopez/Dallas Voice)

Del Shores and Emerson Collins return to Dallas for sentimental reasons — and theater,
of course

Even sitting in a coffee shop patio next to loud traffic and gas fumes, Del Shores and Emerson Collins say they are glad to be back in Dallas. With two shows on the horizon, this would appear to be a working trip. But for these two, the work sounds like anything but that.

At least, for the most part.

The two have returned to Dallas for the world premiere of Shores’ A Very Sordid Wedding at Uptown Players. The show opens Sept. 24. But Shores is also doing double duty, with his stand-up show The Shit Stirrer at the Rose Room on Sept. 26. According to both of them, this is typical. 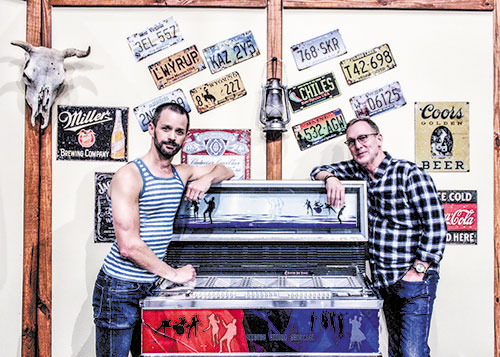 “We knew if we can do one thing, then add to it and cross-promote. We’re a two-man band, and we’re fighting to get noticed,” Collins said.

“Plus, we’re just starving for attention,” Shores added, following that up with a sip of his coffee.

He may have said it as a joke, but there is some truth to that statement — ok, a lot of it. The Shores/Collins producing team are both products of the stage, and for the past year-and-a-half, there’s been almost no stage for either one of them. When

Shores did a performance in Provincetown this summer and the audience applauded, he was, he said, dumbfounded.

“It’s a drug. You walk on stage and hear that applause. We didn’t get that for so long,” Shores said. “It was so emotional to hear, and then I had to do comedy? I was like ‘Give me a moment, here.’”

These two, who were used to being on stage and being public figures, were stuck at home for the longest. Shows were canceled. That applause drug was no longer available.

But let’s remember, these are two creatives.

“We started the Del and Emerson Show online, which focused on queer news, and we started a podcast,” Collins said. “We did that just to have something to do.”

Shores did a version of Shit Stirrer online at his dining table to serve as his audience. He also taught acting classes online, all which perhaps acted as consolation for his theater bug.

But, “It’s just not the same doing theater on Zoom,” Collins added. “People writing ‘Hahaha’ is not the same experience.

There are exciting aspects for online art, but it’s no replacement for that connection you have with other people for that shared reaction.” 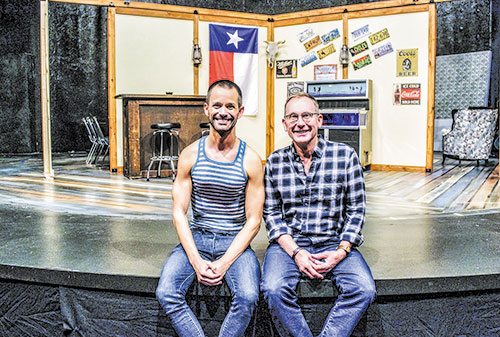 Shores is a playwright, director, actor, producer and advocate famous for his Southern comedies such as Sordid Lives, Southern Baptist Sissies and The Trials and Tribulations of a Trailer Trash Housewife to name a few. Collins now serves as a producer for Shores’ shows but is also an actor who started in Dallas. The two connected after Collins was in a production of Southern Baptist Sissies with Uptown Players, and they would later form This Side of Crazy production company to oversee all of Shores’ work, rather than leave it to outside interests.

The symbiosis can be witnessed across the table as they talk. They aren’t the “finishing each other sentences” type. Talking to them together is more like flipping through the pages of a book; they tossed out ideas and chatter with rapid-fire pace, but it always made sense.

“What Emerson has is the left brain that I don’t have,” Shores said. “He’s an amazing producer, but I promised him that I would always think of him as an actor first. If he leaves our operation, I’m probably done and will move to Palm Springs and retire.”

Even with Shores’ impressive back catalog of work, the two aren’t willing to just rest on those laurels. “We’ve built something here,” Collins said. “At every point we think about what we want to do next, and we figure it out.”

As it turns out, helping other writers is next on their list. Well — it has been next on the list for more than two years, but, again, the pandemic put things on hold. Now the two are on track with the Del Shores Foundation.

“We launched the build-up right before the year blew up. So, right now, it’s exciting to talk about this and being here,” Collins said. “Looking at what we have done and accomplished and Del’s legacy, we wanted to pay it forward for other people. The foundation is about finding southern LGBTQ writers, those unknown voices, and seeing what can we do to support them.”

Proceeds from the Shit Stirrer show will benefit the foundation, which is currently holding a writer search, where participants can submit works for screenplays, plays and short film/web series.

“I’ve had lots of mentors. When I was 26 and wrote my first script, I had people who told me I was good,” Shores said.

“We wanted to do that for the next generation, [so we] launched our writers search.”

Winners receive a cash prize and have the potential of getting their play staged or read, and screenwriters can connect with production companies via the foundation.

“Because the fans have been so loyal, that’s what got us into this concept. With our influence, we could make it easier for someone coming up, and that’s the greatest feeling — to pay it forward,” Collins said.

They both stressed that participants do need to identify as LGBTQ and live in the southern United States, but stories don’t have to be necessarily queer. “Write your football movie,” Collins said.

Shores added, “We felt strongly about that. Write your own story whatever it is.”

Local news anchor/television host Ron Corning is an honorary board member of the foundation. He will join Shores in the Rose Room show alongside Collins, Rosemary and Newell Alexander and Ann Walker.

While Shores readies for his show, Collins has been busy as assistant director for Sordid Wedding at Uptown.He will also reprise his role as Billy Joe Dobson from the movie for the stage production, which he will also feature Cassie Nova as herself and Paul J. Williams as Brother Boy.

A Very Sordid Wedding is slightly new territory for Shores, he said. The Sordid Lives sequel was first a film released in 2017, and this Uptown Players production marks the first time that script is being presented as a play.

A Very Sordid Wedding marks the fifth play produced by Uptown Players from the Del Shores library, and the second one to be directed by Shores himself.

For both men, this is a full-circle moment — in many ways.

“I remember being at Garland Summer Musicals with Jeff [Rane] and Craig [Lynch], talking about creating a gay-themed company. Now they are a premiere regional company in the country,” Collins said. “We look at where we’ve come from and how they blew up, and it’s great to see that parallel.”

Shores continued, “Let me just say about Uptown Players: They have been so great to both of us, and they are just this wonderful, thriving group of arts people.

“To add to that, there is no city I feel more loved in than in Dallas. It has been so very good to me,” he added. “What flashes in our head are those sold out shows at the Majestic and the standups in the Rose Room. Theaters here have done my plays. I met Emerson here. It’s a great city of love for us.”