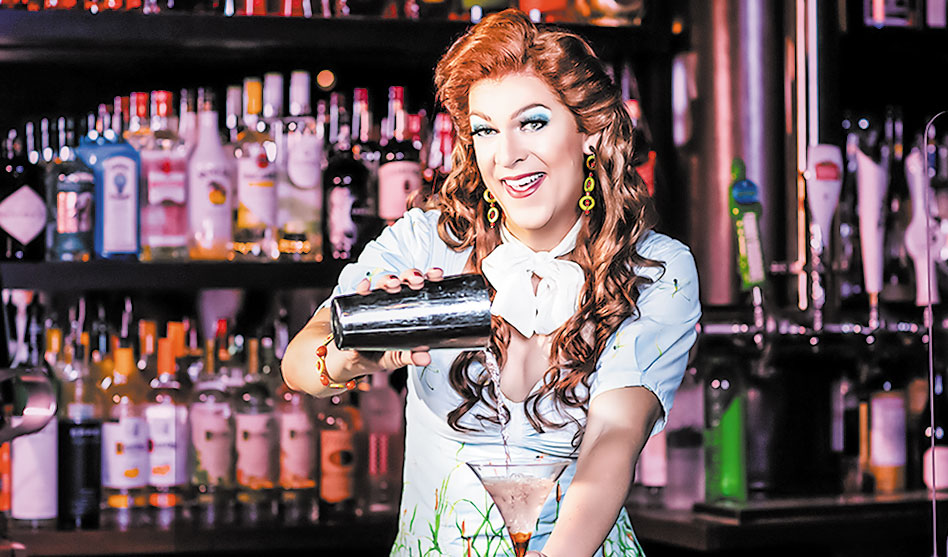 “Thank the Lord and the Baby Jesus and all the ships at sea!” Dixie Longate declared when she heard that my household was not among the thousands here in Texas to lose power for days on end or having to deal with massive water line breaks or unsafe drinking water during deadly Winter Storm Uri in mid-February.

“Oh my stars and garters!,” Dixie added. “It has just been crazy!”

Safe to say, I guess, that Dixie is, um, rather expressive, which, when you stop to think about it, isn’t surprising when you are talking about a transplanted Southern belle navigating her way came through a pandemic and killer weather and more.

Dixie Longate is the alter ego of actor/writer Kris Andersson, who created Dixie some 17 years ago after a friend dared him to sell Tupperware in drag. That led to Andersson creating Dixie’s Tupperware Party, a live stage show in which Dixie interacts with the audience, actually selling Tupperware, while she tells the story of her life. Dixie went on to become not just a star on the stage but, at least twice, she has been Tupperware’s number one sales rep in the U.S. and Canada.

To hear her tell the tale, Dixie was living in a trailer park in Alabama when she decided to leave her three children there to hit the road selling Tupperware. After the Tupperware party, Dixie offered up her wit and wisdom in a second show, Never Wear a Tube Top While Riding a Mechanical Bull (And 16 Other Things I Learned While I Was Drinking).

It was a good life.

Then came the pandemic, and Dixie found herself stuck at home, trying to entertain herself AND the kids.

“I don’t wanna just be sitting here doing nothing!” Dixie said in a recent telephone interview. “I mean, you know, they give you your kids back and expect you to take care of them and, well, they came home one day last March and told me school was closed. And I didn’t believe them, but they said they had a note from the principal. I said, well slide it under the door. And sure enough, school was closed. So I had to find some way to keep them entertained.”

The pandemic lockdown was a time a great discovery for Dixie. “I found out I have kitchen,” she said. “I didn’t know this. I just thought that room was where we kept the liquor. Then I went in for vodka and looked around, and hey!”

Once she realized there was a kitchen with appliances like a stovetop and an oven, new avenues opened up. “The kids were always saying things like, ‘I want dinner’ or whatever. And I have learned to cook for them,” Dixie said.

There were other new adventures, too. For instance, “When we ran out of toilet paper, I just crocheted some! I found out that that acrylic yarn washes out so easy, so you can use it again and again,” she said.

The kids, of course, needed entertainment as well, so Dixie came up with ways to keep them occupied, like, for instance, “How many full-sized liquor bottles can you find under a queen-sized bed. That was good to get the kids involved — they’re so little they can squeeze right under there.” It was a game that served more than one purpose, too: It kept the kiddos occupied; the space under the bed got cleaned out AND sometimes they even found bottles that still had liquor in them.

It was, as Dixie said, “a win-win situation.”

“I said, you know, I don’t wanna be bored out of my mind, either. I wanna do something,” Dixie explained. “And I was seeing all these meetings and happy hours online, and I thought, I can do that. I mean, if I’m gonna drink, I might as well drink in public.”

Dixie started out hosting happy hours via Facebook Live, sharing cocktail recipes and stories with her followers. But then it occurred to her that there was a way she could reach more folks and do more good with her happy hours.

“I decided to find a way to get a show out there to the theaters and the art centers who have supported me all along and use that to do something for them now,” Dixie explained. So she wrote a show called Dixie’s Happy Hour, all about the four basic food groups — gin, rum, vodka and tequila. 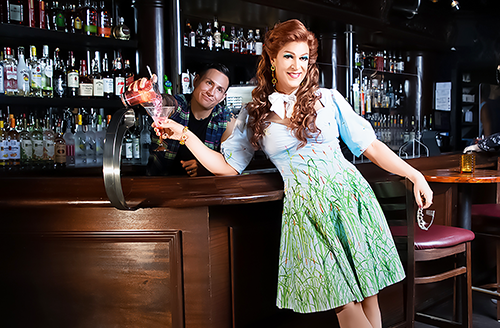 It’s a streaming show designed, basically, as a fundraiser for theaters hit hard by the pandemic that left them dark for nearly a year. “There are a lot of people creating content and sharing it online, and that is great. But still, the theaters and the arts centers are hurting,” Dixie said. “A lot of the theaters are having to lay people off, furlough people. It breaks my heart.

“That’s why I wanted to partner with the theaters and art centers for this show,” she continued. “They are the ones who will be getting the lion’s share of the ticket sales from this show. That’s the whole point, to bring money back to the theaters and at the same time entertain people. And my heart has been filled by how many arts centers and theaters around the company have jumped at the chance to do this with me.”

The premise of Dixie’s Happy Hour is simple: Dixie teaches audience members a variety of cocktail recipes, and, she said, “Each drink leads to stories about my life and my background.” But it’s also about getting audience members to relax, have fun and remember the good things about themselves and their lives.

“The whole message of this show is about finding the happy hours that are right in front of you,” Dixie said. “We are all going through all this craziness of the pandemic, but I want to remind people that there are still great things right in front of you that you’ve been missing.

“One of the things I do is get people to make a list of what’s great about them,” she continued. “One of the things that has been so interesting about this is realizing how much people under-value and under-estimate how amazing they are, how adaptable they are. Last year in March, people’s whole lives changed. And people got so caught up in how much things changed and how hard that was, they missed how quickly that we, as a society, were able to adapt. People have been missing that; I want to remind them.

As much fun as she is having with Happy Hour, Dixie said, “I know that sooner or later, I will be touring around again, coming back with my other shows. This is just something to fill that hole in the middle. And I do love to fill a good hole in the middle.”

She continued, “I just wanna hug people! The people I meet are the thing I have always loved the most about being on the road. I just wish everyone could spend an afternoon in my shoes. It is the most wonderful thing. That’s the big element I really miss — hugging people and laughing together.”

For now though, touching remains off limits — well, pretty much.

With Happy Hour, “If I can’t touch you personally, I’m gonna touch you online!” Dixie declared.

The show is 95 minutes long, and Dixie encourages those who watch it to “treat it like a full night out at the theater. Go ahead and mix a cocktail ahead of time. Call your friend, Zoom with them before the show. Watch the show, and then Zoom with friends again afterwards. That way you can be with your friends online, and you can have the same kind of evening you would otherwise.

“Watch the show together. Take stock of your lives and remind yourselves and each other what is great about each other,” she urged. “I can’t hug people in person, but I hope to do that in a small way with my show online.”