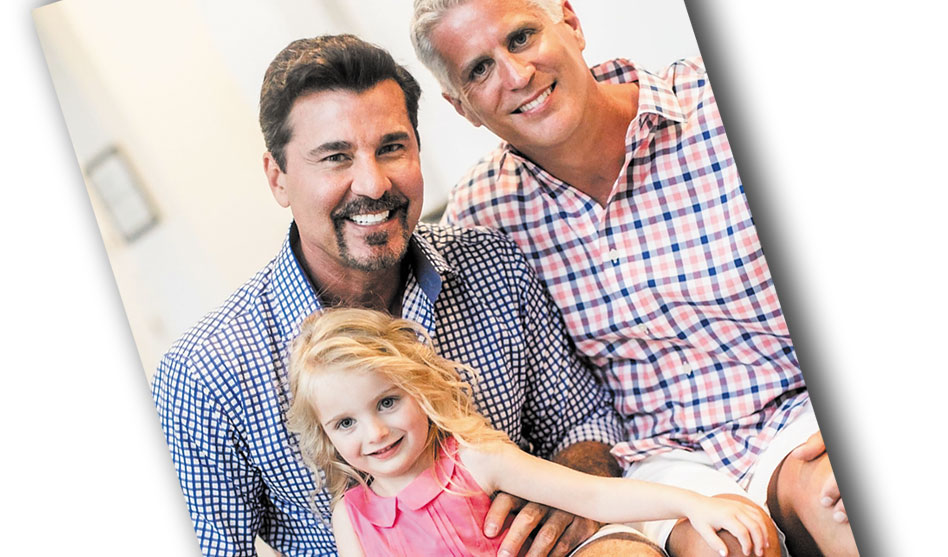 Southlake couple have made their mark on history: The story of JD Trueblood and Franco Dooley’s adoption ordeal was read into the Congressional record in February as part of the testimony supporting Rep. John Lewis’ bipartisan Every Child Deserves a Family Act.

The couple has been together 18 years and married for two. In 2013, two years before marriage equality became the law of the land, they decided they wanted to adopt. But that was easier said than done.

“Before marriage equality,” Trueblood said, “we had a hell of a time getting adoptions to go through.”

They worked with Lifelong Adoptions, an agency that specializes in gay adoptions that Trueblood described as more of a marketing firm focused on helping couples looking to adopt connect with birth parents.

“They marketed us across the country,” he said, adding that they went through five failed connections — including one potential mother who wasn’t pregnant and another who decided to keep her baby.

Finally, they connected with a mother in Utah who was six weeks away from giving birth. They spoke on the phone, Trueblood said, and “she picked us to adopt her baby girl,” Trueblood said.

Then they connected with an adoption attorney in Utah. But that’s when they hit another snag.

“Unfortunately, our adoption attorney, agency and social case worker informed us, ‘This will never happen for you in Utah … . of all the states, Utah is the toughest for gay adoptions,’” Trueblood wrote in his letter to Congress.

To sidestep Utah law that, at the time, prohibited two unmarried people living together from adopting, one of the men filed to adopt as a single father, and the other moved out of their home. But their attorney stepped out of the case at that point, because she felt they were deceiving the court. And their caseworker went with the attorney.

So Trueblood and Dooley got in touch with Lambda Legal, who put them in touch with another local attorney who agreed to represent them. But that fell through, too.

“She initially agrees to represent us; however, admits she’s never had a case like ours and doesn’t think we’ll be successful,” the couple wrote in their testimony to Congress. “Two days later she calls and drops us, citing the legal environment for gay adoptions. Now we’ve been dropped by two attorneys.”

Although all the necessary studies — financial, home, background check — had been done, they had been done as a couple. Everything had to be redone for Trueblood to adopt as a single man. But time was running out; the mom was due in just a few weeks.

Before they were able to get any new paperwork filled out or find another attorney, they received a call from the baby’s grandmother: Mom’s water broke early, and she was going into labor.

So, the two men dropped everything and flew out to Salt Lake City — without new documents, a new case study or any of the other necessary paperwork. They located a third attorney, but she was out of town and wouldn’t be back for five days. They needed to act quicker so Dooley, who’s an attorney, acted as Trueblood’s lawyer.

The men needed to remain in Salt Lake City for 10 days and file with the Interstate Compact on the Placement of Children that ensures the protection of children being placed across state lines for foster care or adoption. Utah required a 48-hour waiting period for the mother, but the hospital was ready to release mother and child within 24 hours. The hospital agreed to delay discharge of the baby for a day to give the men a chance to get everything in order.

But now the delay was with Texas.

Trueblood said when he called Texas Child Protective Services, he decided to be honest with them. First, he explained Utah law that prevents them as a couple to adopt. That was why the application was for him as a single. He explained that all of the home studies and background checks were done for them as a couple, and they didn’t have time in the few weeks they had for the paperwork to be updated.

What he quickly learned was that, although Texas lawmakers and laws were stacked against same-sex couples trying to adopt, people who worked for CPS were only interested in finding children good homes. So the woman he was talking to asked if he had a background check he could forward to her. A copy of it was on his phone, so he sent it.

And the home study? “We have everything,” he told her, forwarding all the paperwork to her. She approved the application, and “We literally got on a plane that day,” Trueblood said.

Once back in Texas, Trueblood’s adoption of his daughter went through. But second parent adoptions weren’t easy for couples before marriage equality; not every judge in Dallas County would allow a second, same-sex parent to adopt.

At the time, the one sure place to complete an adoption by a same-sex couple was San Antonio. That was because an attorney could “judge shop,” or place the case in a specific courtroom. So the couple headed to San Antonio to make their new family legal.

Their daughter, Sydney, is now six years old. Since it was an open adoption, they visit Sydney’s bio mom in Utah once a year.

For the record
Trueblood and Dooley’s story was read into the Congressional record in February to make two points. First, state laws that exclude potential adoptive or foster parents because of their marital status, sexual orientation or gender identity is not in the best interests of a child, because it reduces access to permanent homes for these children, Trueblood wrote in his testimony.