Even a few weeks after his latest release, Mitch Grassi is still feeling the surreality of it all. A singer with Pentatonix, a five-person ensemble known for their a cappella work, Grassi recently struck out on his own as Messer, dropping the lush EP Roses in late August. 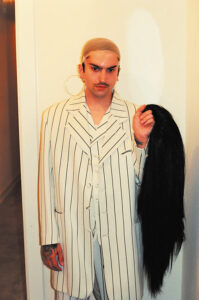 The idea for his own music is years old, Grassi said, but it took a pandemic for him to move forward with it.

Roses marks the second release for Grassi in 2021; Pentatonix released The Lucky Ones in February. But Messer gives Grassi a new slate.

“They are so incredibly different. Pentatonix is huge, with five different people, but we all have the same goal in mind,” Grassi said by phone from the East Coast. “With Messer, this is uncharted territory for me, with total creative control. I always knew I wanted to make my own music, and I gave myself the chance to do so.” 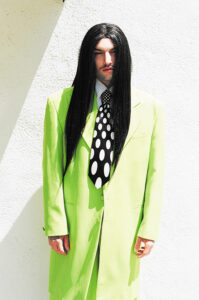 “I was ready to put it out, and it feels like an amazing set of songs,” he said. “It’s the perfect introduction to my tastes but completely different from the group.”

Grassi, who hails from Arlington, said it was the time leading up to the release that he was the most anxious. Creating the

EP and being on the precipice was the scariest part for him. Now, though, he’s in a vulnerable spot. “Usually, it’s a group effort. Here, I’m totally exposed on my own,” he explained.

There was first talk of his own release way back in 2018, but Grassi hadn’t grasped how to approach it. He credits his creative partner, Austin Macedo, with getting him on track. And then, there was also a pandemic starting.

“I really started writing music at the start of [the pandemic],” Grassi said. “There were lots of changes happening, and I had things to say. This was the right time to get them.

“I think it was almost like a really extreme reaction to the pandemic starting.”

Despite the tragedy of COVID-19, Grassi unearthed a silver lining for himself.

After finding fame with Pentatonix in 2011, followed by three Grammys and nine studio albums, the pandemic gave Grassi time to reflect on the art he wanted to make. Being alone with his thoughts and purging his emotions, he took the global trauma that everyone was experiencing and channeled it.

“My thoughts were definitely born out of loneliness and the need to escape,” he said. “But on the flip side, there are songs about the appreciation of beauty and fragility and just the randomness of life. I wrote those so quickly. I guess they were a symbol of that time in my life.”

These days, artists can’t go without releasing a collaboration (they used to be called duets) or work on a side project.

Messer falls in the latter, but Grassi would likely refer to it as something different. Messer is less a project and more of a concept, he suggested.

“The way I view it, it’s not a person or a band or anything,” he said. “I see it as the feelings and the music that’s always been deep inside me released in an authentic way.”

Another thing that’s released is the EP’s visual concept. Grassi even describes Messer as visually authentic in his presentation — most notably the long dark locks in much of his promo material.

“It’s funny. I think when I put that on, I transform. I relax into myself or something,” he said. “Even fans have noticed.”

Speaking of, how have Pentatonix fans taken to the new music? “They are very sweet, and I’ve had lots of positive comments. To those people enjoying it, I extend my gratitude. The positive comments, them being happy for me, that’s enough for me.”

Roses by Messer can be heard on all major streaming music apps.