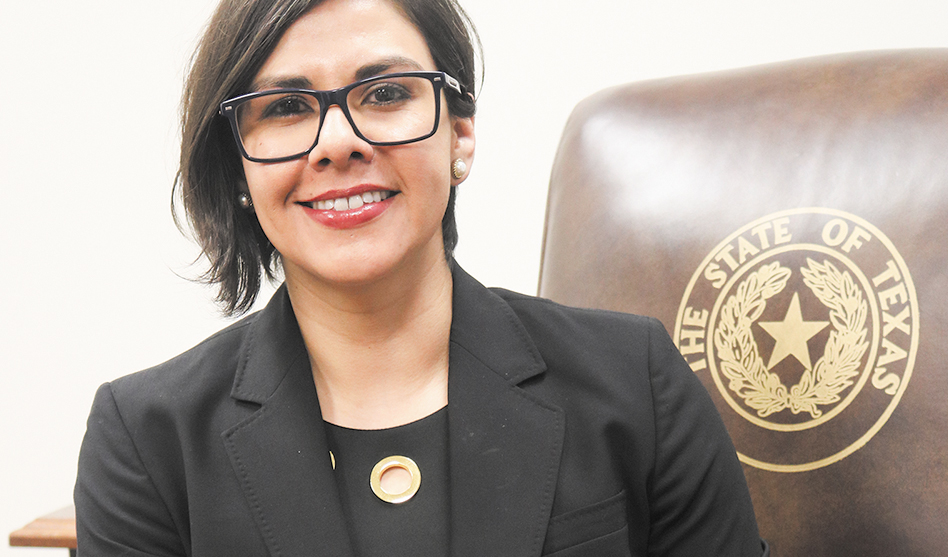 After defeating an incumbent in the primary, Rep. Jessica Gonzalez helped found the LGBT Caucus, passed legislation and developed some strange friendships in Austin

State Rep. Jessica Gonzalez said she first thought of running for public office after a traffic accident at NorthPark, when a security officer at the mall ran a red light and hit her. He apologized and called the police. But when they arrived, they began treating Gonzalez like she had done something wrong.

Her mother, who was with her, asked her in Spanish why they were treating her like this, and the police said if she didn’t stop speaking Spanish, they’d arrest her.

Gonzalez said she was thinking of going to law school at the time but began thinking she’d like to use her degree to do policy and advocacy work or maybe run for office.

She took an internship with attorney Domingo Garcia, who encouraged those ambitions. Today her law office and her district office are in the same Oak Cliff office tower where Garcia’s offices are located.

So is the law office of the former incumbent she beat in the 2018 Democratic Primary.

Few people took Gonzalez’s candidacy seriously at first. In fact, Stonewall Democrats was the only Democratic organization to endorse her. She said she went to candidate screenings across her district, which includes parts of West Dallas, North and West Oak Cliff and part of Grand Prairie. And although she showed up and the incumbent didn’t, he still got the endorsements.

But Gonzalez block-walked and knocked on doors in neighborhoods where no political candidate had ever shown up. And she won. She credits Lee Daugherty, owner of Alexandre’s on Cedar Springs Road and president of Stonewall Democrats at the time, with working on her campaign tirelessly and helping put her over the top.

When Gonzalez won her primary, she was effectively elected to the Texas Legislature, since she faced no opposition on the November ballot. She said her win on primary night didn’t seem real. In fact, she added, “It’s still sinking in.”

In May, Gonzalez finished her first session in the Texas Legislature, where she was one of a record five openly-LGBT members of the House of Representatives and one of two LGBT reps from Dallas County. She became good friends with the other out Dallas rep, Julie Johnson, and the two shared an apartment in Austin through the session. They and the other three out representatives formed the first LGBT caucus in Texas history.

Her apartment in Austin was just a few blocks from the Capitol, and Gonzalez said she’d look out her window at the Capitol and think to herself, “I can’t believe I have an office in that building.”

She said living with Johnson made Austin feel more like home. “It was nice to live with someone I trust,” she explained. “We kept each other sane and were a good balance for each other.”

In the mornings they walked to the Capitol together. They threw around ideas for legislation. They developed a comfortable routine.

Gonzalez said she developed a number of other friendships during her first term, some of them quite surprising. While the U.S. Congress sits Democrats on one side of the aisle and Republicans on the other, Texas House members choose their seats by seniority. So Republicans and Democrats sit mixed together throughout the floor.

They also share one members lounge. And one day in the lounge, Rep. Jonathan Stickland, R-Fort Worth, sat down next to her, and they began chatting.

Stickland is one of the most conservative members of the Texas House. The Eagle Forum gives him a 100 percent rating, and in its best and worst awards, Texas Monthly placed him in his own special category — cockroach.

He said to Gonzalez that he understood her: “You’re like me on the Democratic side. I respect that you stand up against a bill you don’t like.”

Gonzalez acknowledged that on several bills, she wasn’t afraid to be the lone Democratic vote against something she just didn’t support.

But then Stickland asked if he could ask her a personal question. Sure, she told him, but said she reserved the right not to answer.

What does that mean, she wondered. She told him she dated women, if that’s what he meant. Then he explained: A woman close to him had just broken up with her girlfriend.

Gonzalez wondered, was the most conservative Republican member of the Texas House trying to set her up on a date?

Gonzalez said it never went beyond the conversation they had that day.

Forming the LGBT Caucus was on the minds of the five LGBT women even before the Legislature convened. Having five LGBT members was historic. Glen Maxey was the only openly-gay member while he served from 1991 to 2003. Mary Gonzalez, D-El Paso, was elected in 2012. Celia Israel, D-Austin, was elected in 2014. In 2018, in addition to Johnson and Jessica Gonzalez, Erin Zwiener, D-Driftwood, came to office by flipping a seat in the counties just south of Austin.

More than 20 additional members of the House joined the caucus, which worked furiously through the session to kill anti-LGBT legislation. Only one bill made it to the floor — a religious exemption bill. Johnson is credited with making the political move that convinced House Speaker Dennis Bonnen to kill the bill.

At the beginning of the day, Stickland came over to Gonzalez and put his hand on her shoulder.

So when Johnson’s maneuver killed the bill, Gonzalez said she was surprised by the reaction. She expected backlash. Emotions were running high all day. Each of the five caucus founders made a speech on the House floor. Gonzalez called hers that day her most impassioned of the session. This was personal.

But when the vote was over, she was surprised when Republicans came over to her and quietly thanked her for helping kill the bill. They explained it wasn’t personal. They were “voting their district.”

Gonzalez said she learned an important lesson. Having five LGBT members of the House has made passing anti-LGBT legislation harder, but when they cast a vote, it’s on an issue. It’s not necessarily personal.

She said something else about that day was particularly emotional.

“On the House floor, I’m telling the whole world I’m gay,” she said. And that’s a big deal because, although she’s taken girlfriends home to her family before, she never had the official talk with her father.

During her first term, Gonzalez passed one bill that was signed into law, something freshmen Texas legislators rarely do.

The bill had to do with allowing property in Oak Cliff owned by Oak Farms Dairy to be redeveloped. She said there are stipulations to include affordable housing on the site, and before anything is done, the Dallas City Council has to act on it.

Nothing exciting for a first piece of legislation, she said, but added that she did learn there are other ways to get things passed — amendments and conference committees.

She also learned that Democrats and Republicans are not always speaking the same language. Rep. Michelle Beckley, D-Carrollton, filed a bill to remove the sodomy law from the Texas penal code. That law was declared unconstitutional by the U.S. Supreme Court in 2003. After a committee hearing, she spoke to some of her Republican colleagues who killed the bill.

“I know you don’t want us to have equal rights,” she argued with them, but this changes nothing. It simply removes an illegal statute that can’t be enforced. But she got nowhere in her discussion.

“You’d be surprised how many Republicans have no personal issue with gays,” she said. “It always goes back to their district.”

Gonzalez filed more than 25 bills in her first term. She knew most wouldn’t make it through committee, but said she was planting seeds for future sessions. That’s how things get done in Austin.

In the off-session, Gonzalez is opening a district office to take care of constituent needs. She is practicing law, and she’s waiting to see if a special session will be called to deal with gun violence.

While property taxes and education dominated the 2019 legislative session, Gonzalez said the legislation passed on property taxes was symbolic. It simply creates a trigger: If taxes are increased more than a certain percent, it has to go to voters. With appraised values soaring throughout the state, taxes will rise — sharply in some cases — without approaching the trigger.

She said more money was sent to education, but much of that money came from the state’s Rainy Day Fund, and that funding can’t be sustained. Additional solutions will have to be found in future sessions.

Meanwhile, Gonzalez said she’s running for re-election and is excited about getting to work in the district and getting to know more of her constituents.