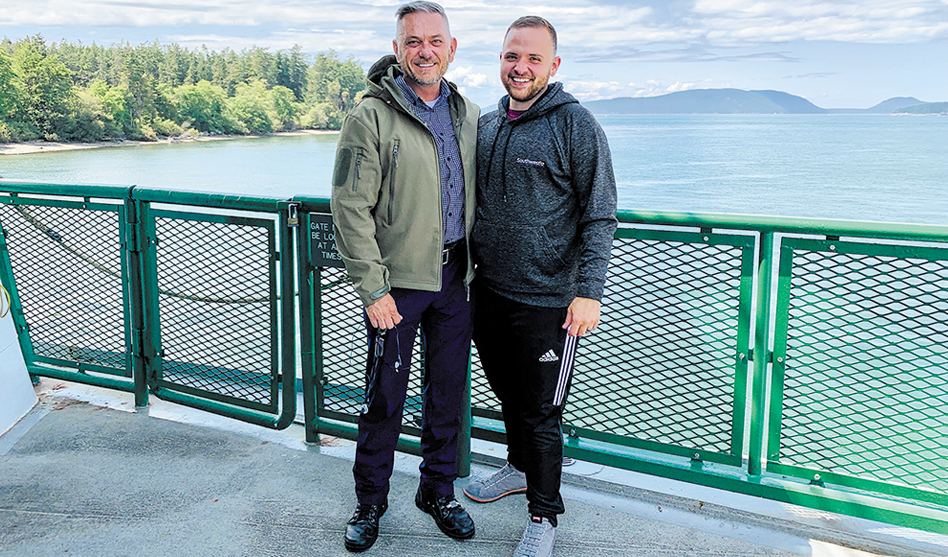 Everybody needs somewhere they know they are safe. And nobody needs that more than LGBT people.

And that’s exactly what Dallas couple Ethan Avanzino and David Whitehead hope to provide for people in the LGBT community through the newly-established nonprofit, Safe To Be.

“When I came out [and] transitioned, and when I was talking with people about my story of acceptance from my family and friends and at work, I started to realize, my story is not the normal story,” said Avanzino, a transgender man who works for Southwest Airlines.

Many trans people are fired from their jobs, kicked out of their homes and lose their family and friends, he said.

And those who find themselves homeless also often find that shelters and services are not at all trans-friendly.

“That is something that has to be addressed in our community,” Avanzino continued.

So when he started seeing articles about “tiny home” communities that are being created for homeless people, Avanzino said, it struck him: “Why don’t we do that with an LGBT focus?

Avanzino and Whitehead said they really began working toward establishing a non-profit organization aimed at creating a “tiny home” LGBT village in April of last year. “That was when the idea really solidified,” Whitehead said. “I mean, life-changing-commitment solidified.”

So they began the process of applying for 501(c)(3) nonprofit status. Unfortunately, after they started that process, the federal government shut down for five weeks, from Dec. 22, 2018 to Jan. 25, 2019. So the waiting period between filing for and actually being approved for nonprofit status took about six months.

Approval finally came through at the end of March of this year.

That process isn’t free, and Whitehead said that he and Avanzino that they raised the money to pay for it the way they’ve raised all the organization’s funds so far: primarily through the LGBT community.

The couple are members of the United Court of the Lone Star Empire, and the Court has played a big role in helping raise the funds Safe To Be has needed so far, they said. “We are so thankful for the Court,” Whitehead said.

“We couldn’t have done anything that we’ve done so far without them.”

But for the biggest expenditure so far, Avanzino and Whitehead dug into their own pockets, using their own funds to purchase 22 acres of wooded land in Eureka Springs, Ark., which will become the site of the Safe To Be village.

They closed on the sale Wednesday, Oct. 30, and will later donate all but one acre of the property to the Safe To Be organization. That one acre, they said, is where they will build their own cabin in the woods.

Why Eureka Springs? Considering that Arkansas doesn’t have the reputation of being especially LGBT-friendly, it may seem to some a strange place for Safe To Be to be located.

Whitehead has the answer to that. “Besides the fact that it is absolutely gorgeous there, Eureka Springs is one of the most diverse and most inclusive cities we have ever visited,” he said. “There is a very large gay community there, and a very large trans community. And the residents there accept everyone, which is something we just fell in love with.”

Avanzino recalled an incident on their first visit to Eureka Springs in which they were walking down the sidewalk holding hands when “this big Bubba in his big truck pulled up beside us and rolled down his window. I thought, ‘Oh, here it comes.’”

Instead, the man asked if they were on their first visit to Eureka Springs then welcomed them to town. And when they met with the man from whom they purchased the land for Safe To Be, he also offered a warm welcome and acknowledged them as a couple.

Plus, as they say in real estate, location is everything. And this property has location in spades, the couple said. It is close to Dallas, Oklahoma City, St. Louis, Kansas City, Tulsa and more, and the wooded, rural setting will offer residents a kind of “spiritual retreat” away from the strife of big city living.

“Nature tends to nurture,” Whitehead said. “I am hoping that’s what happens here.”

The Safe To Be property will feature what Whitehead and Avanzino said are known as “shomes” — a collection of residences, each consisting of two sheds, each converted into a tiny home each with its own kitchenette and living space, connected by a common outdoor deck or porch. There will also be community gardens, community kitchens and other shared spaces and amenities.

The idea is to provide safe housing that gives residents the privacy they want and need, while at the same time offering ample opportunity for interaction within a supportive community. And while Safe To Be might not be the ideal spot “for someone who is a hermit,” Whitehead said, Avanzino noted that “We will certainly be inclusive of introverts, especially with trans folk. We want them to be comfortable living in their true, authentic gender, to be comfortable with who they are.”

And, Whitehead added, “We want to give them a chance to celebrate who they are.”

Avanzino said he also sees Safe To Be as “an amazing opportunity to bridge the gap between generations. We are not really communicating and sharing our history across the generations now, and this will be an incredible opportunity to do that.”

Avanzino said one of the first steps they need to take is to “beef up our board of directors,” and they want to hear from people who are interested in participating. Avanzino himself will lead the charge, noting that he has “seen plenty of allies who want to help and who do their best” when it comes to services for transgender people. “But to have a trans voice leading an organization — I think that is very important. And of course, we want more trans representation than just me on the board.”

“Putting together a solid board is the top priority, and the second thing is capital funding,” he continued. “Right now, we have a budget of about $1 million, which is way over the top of what we expected. And to start, we are looking at 20 homes, maybe a few more.”

The plan, Avanzino said, is to “create a model that could be replicated anywhere. If we can make this happen here in the South” — “In Arkansas, of all places,” Whitehead interjected — “there’s no reason it couldn’t be successful elsewhere.”

Right now, Whitehead said, “What we need is for people to give money [to Safe To Be]. That’s the big thing. And we need people to spread the word and to be supportive of this project. We want people to realize that this isn’t some big corporation somewhere starting this up; it’s just two people in Dallas who happen to be gay who want to do something for our people.”

Avanzino added, “We know we are reaching for the stars. But if we don’t try, who will?”

For information about Safe To Be, visit SafeToBe.org or contact Ethan Avanzino or David Whitehead via Facebook.