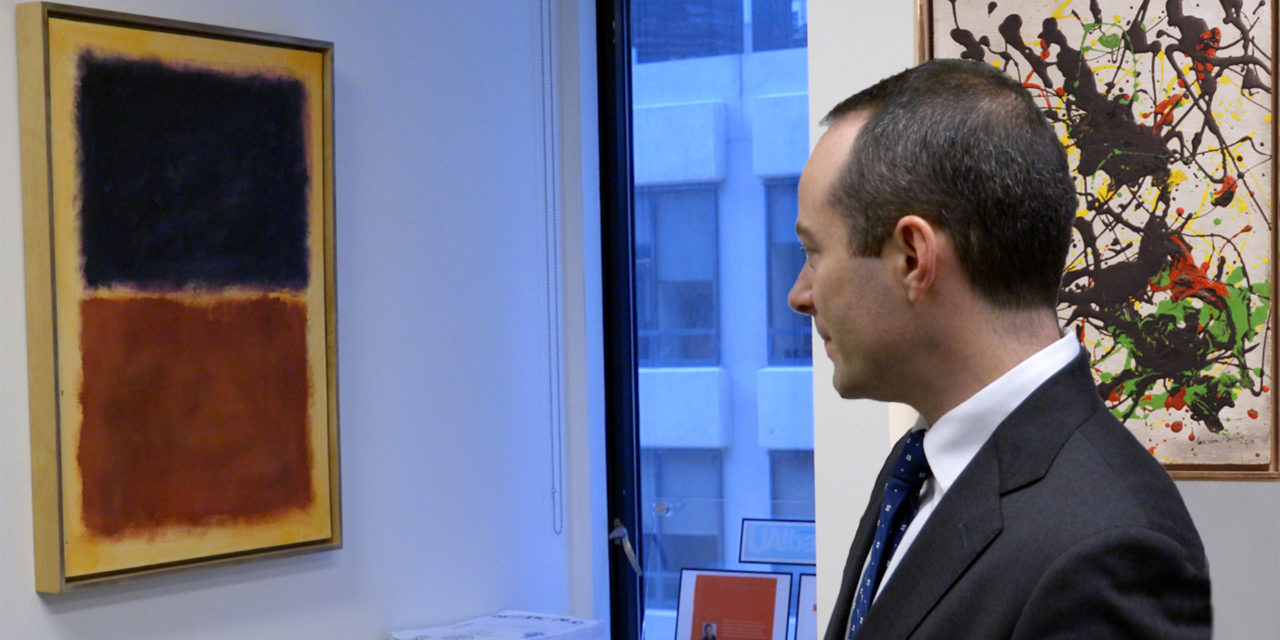 I’m not sure why, but I’m a sucker for movies about the art world. (I studied art history in college, if that’s any indicator.) One of my favorite hybrid films, Orson Welles’ F for Fake, tracks a history of art fraud; last Friday, a studio rushed its long-held-up adaptation of Charles Willeford’s magnum opus, The Burnt Orange Heresy — about an art crime — into theaters (see it!), which recently appeared, along with Portrait of a Lady on Fire, on my mid-year list of best 2020 movies; I’ve praised Basquiat and Pollock and Final Portrait (about Alberto Giacometti) and even Crumb, about the cartoonist; I’ve had a spirited disagreement with the director of My Kid Could Paint That and promoted Never Look Away to the director of the Nasher. And yet it often seems few things could be less cinematic than art: Tedious painting and sculpting and just looking, long silences, the inevitable variations of opinions on what is good or bad or great. And yet, I’m often hooked.

I got hooked quickly by Driven to Abstraction, in part because director Daria Price unfolds the story like a bullet. I’ve rarely seen a documentary jump so quickly headlong into the esoterica of a niche story: The sudden closing in 2011 of the Knoedler Gallery in New York, amid a scandal about who actually painted three dozen works by the most prominent abstract expressionists of the mid 20th century: Rothko, Motherwell, Diebenkorn, Warhol, Pollock.

A detailed anatomy of filthy rich art collectors being fleeced by a gallery operator and, as it turns out, an immigrant who masterfully mimicked the style of art icons, might seem a poor fit for a time when the economy is in the tank, but honestly, it’s deliciously appropriate — a popcorn movie about heady ideas.

The labyrinthine mechanics of the scam unspool like a great mystery: How did 40 paintings, none of which have ever appeared in any catalogue raisonee (an official list of acknowledged works) of their famed creators, get sold for as much as $81 million over 15 years to people who should know better? But it also parries with the concept of what modern art is — if you can drip acrylic on a canvas as well as Pollock, only with paints that didn’t exist until decades after Pollock died, is your work just as worthy? Why is the art world the most unregulated source of economics aside from weapons and narcotics, with conventions no normal person would consider normal?

Is Driven to Abstraction’s subject matter arcane? Definitely. I can’t help that. But it flows like rapids over rocks in 85 breathless minutes, demanding you keep up with it like any good thriller. But hey, I love movies about art. Go figure.