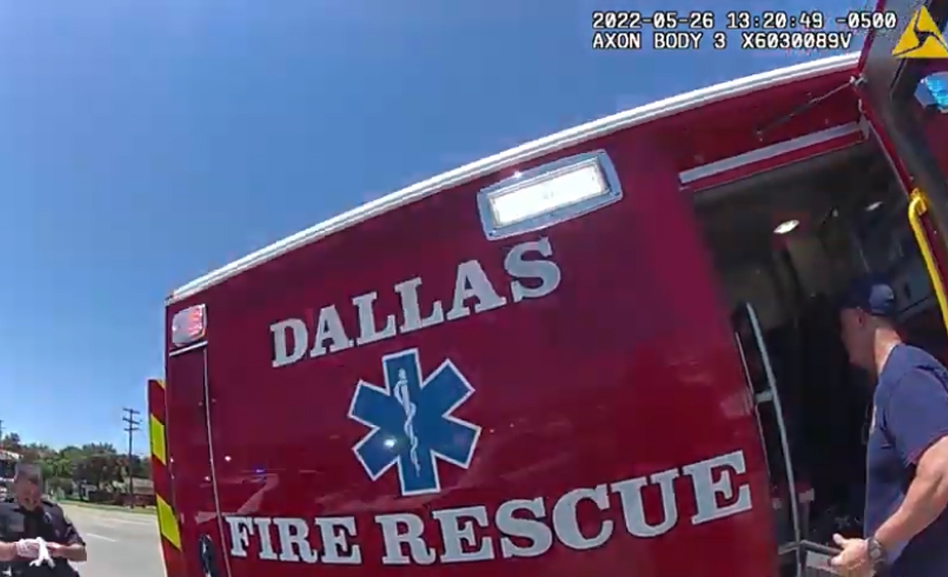 Screen cap taken from video from an officer’s body cam during the May 26 incident involving Dee Hall.

A report on the department’s blog, DPDBeat.com, indicates that officers responding to a call that an individual was “causing a disturbance” at 12002 Garland Road took Hall “into custody for a mental health evaluation,” and that she was taken by Dallas Fire Rescue to Baylor Hospital “where she died.”

The blog post includes this link to video of the incident taken from an officer’s bodycam. (Dallas Voice will not share the video here because it does, in effect, show Hall’s death. Readers should decide for themselves whether to watch it.) The video, which includes more than 35 minutes of footage, shows officers arriving at the location and talking with Hall, who appears frightened and disoriented. The video continues through officers putting Hall, who is by that time on the ground after trying to pull her dress over her head and falling, in restraints, putting her on a stretcher and into the ambulance. It continues until the ambulance arrives at the Baylor Hospital ER, with a paramedic performing CPR chest compressions as she is wheeled into the hospital.

Neither the report on the DPDBeat.com nor the video identify Hall as transgender. However, the blog report refers to her with “she/her” pronounes, and when officers arrive, they call Hall “ma’am.” As the video progresses and Hall lifts her dress, exposing herself in the process, officers and paramedics switch to “he/him” pronouns and call Hall “sir.”

“The Muhlaysia Booker Foundation extends our heartfelt condolences to the family of LaDamonyon “Dee” Hall. The tragic death of any member of the LGBTQ+ community is heartbreaking to us.