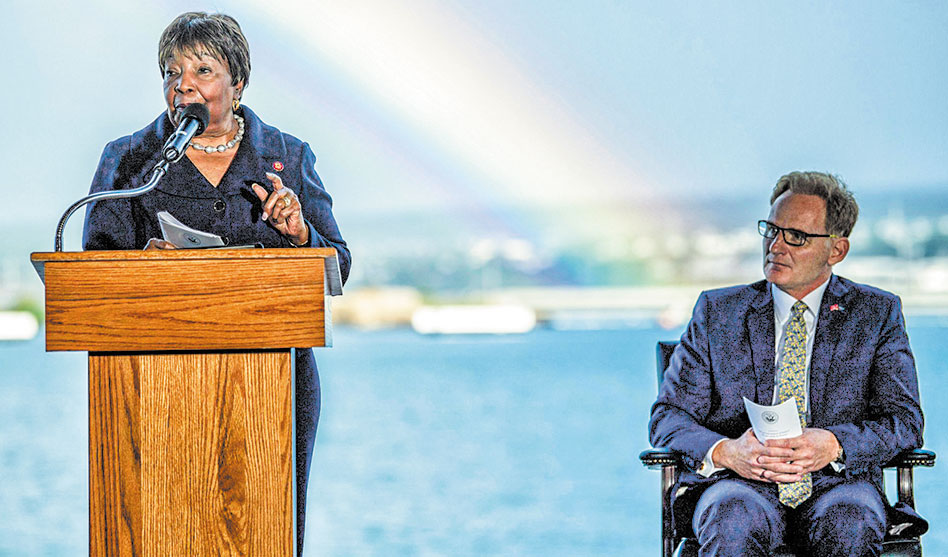 EBJ gets aircraft carrier named after her hometown hero

Rep. Eddie Bernice Johnson worked for years to get the Congressional Medal of Honor for Doris “Dorie” Miller, a WWII serviceman from her hometown of Waco. And on Martin Luther King Jr.’s birthday, the Navy announced it would name its next aircraft carrier after him.

Miller was a cook onboard the U.S.S. West Virginia in Pearl Harbor when the Japanese attacked on Dec. 7, 1941. He served breakfast that morning and was collecting laundry when his ship was hit by the first of seven torpedoes plus two bombs.

Because Miller was black, he was not allowed to handle guns. But when his ship was attacked, he headed for his battle station and saved lives on his ship and on others by his actions. He was awarded the Navy Cross, the third highest award in that branch of the military at that time. He was the first African-American to receive that award.

Until Franklin Roosevelt’s administration, blacks couldn’t serve in the military at all. Under FDR, attendant, steward and cook positions were open. Miller enlisted in 1939 at age 19.

Miller saw an anti-aircraft gun not being used, so he went over to it and began shooting. Although he hadn’t been trained on the .50-caliber machine gun, he downed one of the attacking planes. He then continued to rescue other sailors before the ship sank.

In the film Pearl Harbor, Miller was portrayed by Cuba Gooding Jr.

In 1942, Miller was called home to head a war bond tour. He appeared in Waco and Dallas as well as in California. He was also featured in a 1943 U.S. Navy recruiting poster before reporting to the Puget Sound Navy Yard where he was assigned to the escort carrier U.S.S. Liscomb Bay.

Waco has honored its hometown hero by naming a city recreation center, a YMCA, a cemetery and an elementary school after him.

Before Johnson entered Congress in 1993, Reps. Jake Pickle, Barbara Jordan, Mickey Leland and Craig Washington worked to honor Miller with the Congressional Medal of Honor. In March 2015, Johnson re-introduced a piece of legislation to grant him the award.

He never was awarded that Congressional Medal of Honor. But on Monday, Jan. 20, acting Secretary of the Navy Thomas Modly and Rep. Johnson announced Miller would be the first African-American to have an aircraft carrier named after him.

“The sacrifice and patriotism of heroes like Doris Miller inspired me to pursue public service,” Johnson said. “Though he is deserving of even higher official recognition, including the Medal of Honor, the announcement of the naming of this vessel on Martin Luther King Day could not be more fitting.”

Miller went missing in action in November 1943 during the Battle of Makin when his ship was sunk by a Japanese submarine. Of 900 people on his ship, only 272 survived, and a year later Miller was listed as presumed dead.