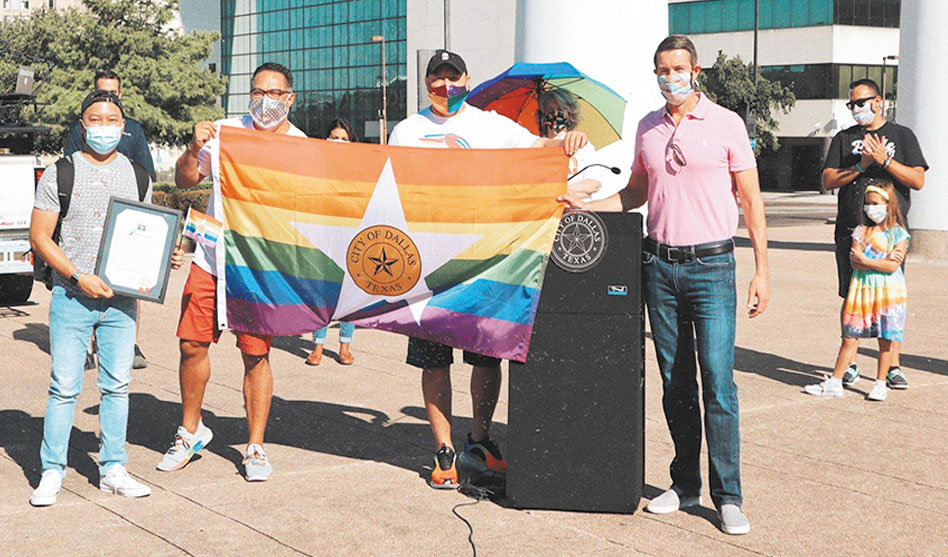 Three gay Dallas City Council members, above, at the ceremony to raise the Pride Month flag he designed for the city.

Dallas’ skyline just became more colorful thanks to graphic designer Tracy Nanthavongsa. Nanthavongsa is the one who designed the city’s first official Pride flag, which will be flown over Dallas City Hall every June from now on.

The design — which features the seal of Dallas centered inside a white star representing Texas, all on a rainbow backdrop — is simple. But it represents a more complex larger picture, Nanthavongsa wrote in a Facebook post.

“The city of Dallas [seal] is located within our great Lone Star State,” he wrote. “And outside of that state, we acknowledge the diversity of a community that unifies us all.”

The city council approved his design by unanimous vote on June 17. And the next day the flag was raised at City Hall Plaza. 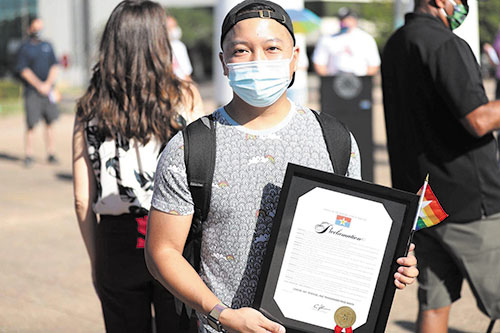 Tracy Nanthavongsa holds a copy of the city of Dallas’ 2020 Pride Month proclamation.

Nanthavongsa’s experience working with Councilman Adam Bazaldua on past campaigns, as well as his tenure at the district attorney’s office, made him an attractive candidate to design the flag. He said that

Bazaldua approached him in May to fashion a city Pride flag.
He agreed to do it, even though he had never designed a flag before. Four days later, Nanthavongsa submitted six or seven designs.

He said the city wanted something that represented both Pride and Dallas. “The easiest and safest bet to combine the two was to use the city seal that already existed,” he explained. “We can’t change the rainbow flag, and the seal they sent me versus the rainbow, the colors, was just really tacky. They didn’t match. So that’s why we used the lone star behind the seal.

“So it’s the seal, the lone star and then the entire community of Pride.”

Nanthavongsa said he did not expect the news of his flag design to blow up. But within a few hours of sharing the news on social media that the council had adopted his design, the post was shared 400 times.

Nanthavongsa submitted the flag right at the same time the protests over the death of George Floyd, a Minneapolis black man killed by police on May 25. Nanthavongsa’s office is on Main Street in Dallas, in one of the buildings damaged in the early protests. He said even though he was scared for himself and for others, he would have designed the flag with the protests in mind if they had happened earlier, choosing to offer a “social justice” flag featuring a fist in beige and brown and the colors of the trans flag.

Still, he said, his experience designing Dallas’ first official Pride flag is a major milestone in his five years as a freelance graphic designer.

“This definitely adds to my portfolio,” Nanthavongsa said. “I don’t think any other city is going to be like, ‘Hey, Tracy, design our Pride flag,’ but it does add some credibility to my name.”