Decision is made: Pride festival is moving to Fair Park

But the location for Dallas’ Pride parade is still up in the air, organizers said during a sometimes-contentious public meeting Thursday 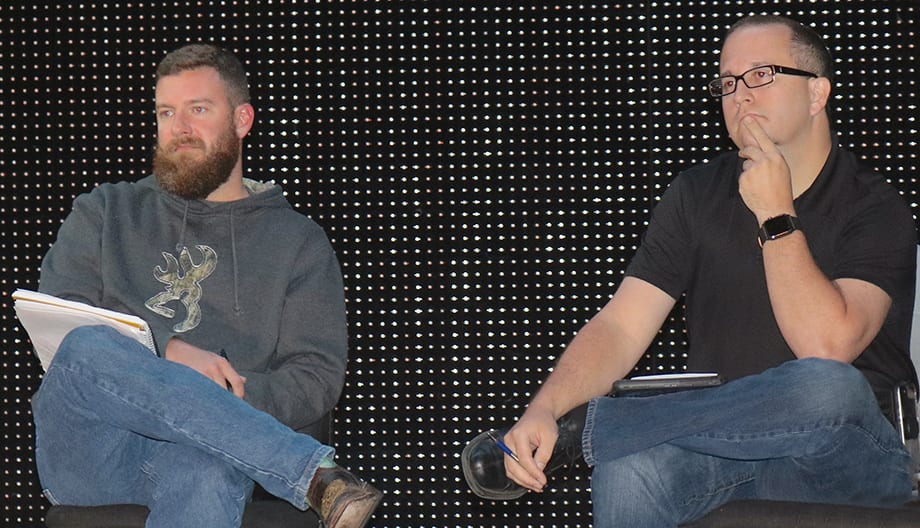 The Pride festival will be held the first weekend in June at Fair Park in 2019, but questions remain regarding where the Alan Ross Texas Freedom Parade will be held next year, according to Jaron Turnbow, executive director of the Dallas Tavern Guild. Turnbow and Pride Committee member Jeremy Liebbe addressed a crowd of about 100 at The Rose Room on Thursday evening, Nov. 1, to discuss the future of Dallas’ annual Pride celebration. Construction, growth, security, parking and handicap accessibility all played into the decision to move the festival, they said.

Turnbow said construction in Reverchon Park, where the festival is held each year, first prompted organizers to consider moving the festival, although the park board told Dallas Voice that provisions are in the contract with the minor league baseball team rebuilding the ball field that annual events must be accommodated. But regardless of that, Turnbow continued, Reverchon offers no room for expansion.

Fair Park will be under new management beginning Jan. 1, but the new management will have to honor any agreements that were already in place. The cost to hold the festival in Reverchon Park was $9,500; it will cost organizers $10,000 to rent the Esplanade and the Centennial Building at Fair Park. But despite the slightly higher cost, organizers said Fair Park has the advantage of allowing much more space and contingency plans in case of inclement weather.

Fair Park also has more parking space, and DART’s green line stops at the entrance just beyond the Esplanade. Fair Park is also handicap accessible, while Reverchon is not.

Because the State Fair of Texas takes up Fair Park throughout September and October, no events can be scheduled in the park after Aug. 1 when rides on the Midway begin to be installed and other preparations for the State Fair begin. So moving the Pride festival to Fair Park necessitated changing the date, too.

As for the parade, Pride committee members are meeting with city officials later this month to discuss upcoming construction on Cedar Springs Road. According to Liebbe, who heads security for most large outdoor LGBT events and coordinates with the Dallas Police Department, if construction is going on, the city will not issue an event permit for the parade.

Although construction is scheduled to start in January and be completed before September, that assumes no delays.

Liebbe said LifeWalk was almost canceled this year because of one patch of concrete that needed to be poured along the route; only city council intervention saved the event this year.

Those attending the meeting in the Rose Room Thursday night spoke on both sides of the issue. Some offered a variety of reasons the events should remain in Oak Lawn. They said, for example, stores, restaurants and bar employees all benefit from the biggest day of business on the Strip.

But costs to put on the parade keep going up, and the city has already told the Pride committee that when parade attendance tops 50,000, it would have to be moved. This year, officials estimated attendance at the parade hovered right around that number.

Expenses that have been escalating include the number of officers required by the city, the amount of fencing and barricades required, professional clean-up and more. Liebbe said policing Fair Park would be cheaper, but he couldn’t speak to other costs, many of which will change with the new management.

Two bar owners — Matt Miller of Woody’s and Alan Pierce of The Round-Up — spoke against the move. Other bar owners, including Dallas Tavern Guild President Lonzie Hershner of Marty’s Live and Lee Daugherty of Alexandre’s, spoke in favor.

Others community members who spoke had a variety of opinions and suggestions.

“It’s not a fun experience to come to the parade,” one community member said. “You can’t see. It’s hard to navigate the crowds. We can’t have fun, and we’ve outgrown Cedar Springs.”

Others spoke about the non-profits that will lose money as a result of the move. At Fair Park, city-approved vendors must be hired. Groups such as TGRA fund their activities from tips they receive bartending at Pride events. And groups such as Purple and Impulse have already planned their 2019 activities around a September Pride and have contracted with venues.

Jayla Wilkerson said, “The parade is about visibility. Pride is a protest. Follow other cities and move it downtown.” Liebbe said moving downtown was a possibility, but security would be a lot more expensive. Four to six officers would need to be posted at every intersection.

Some speakers said they are afraid of moving Pride to an area of the city where the LGBT community wouldn’t be welcomed and are worried about safety concerns. Liebbe said he looked up the statistics and the Fair Park area has a 22 percent lower crime rate than the area of Oak Lawn around the Crossroads.

While some people had ideas about growth and like the idea of attracting hundreds of thousands to Pride as Houston does each year, many grew angry when they realized that the decision to move had already been made.

Brandi Amara Skyy said, “I’m a little bit livid the plan to move has already been made.” Another asked, “What’s the point of asking us now if you’ve already made the decision?” One speaker suggested moving the festival to Fair Park but leaving the parade alone for this year.

After the meeting, Turnbow said he was looking for input and some plans — especially for the parade — are still up in the air. If things don’t work well at Fair Park, the events could move again.