Dance in the dark 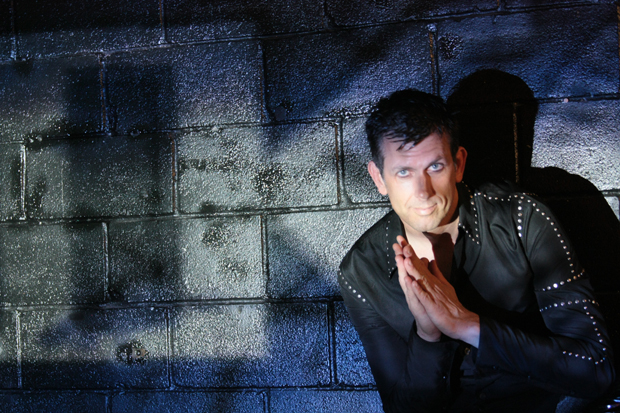 POETRY IN MOTION | Byron Laszlo, aka Lord Byron, has nurtured an eclectic style at his Friday parties, which have been going on for nearly six years in the old Club One space. (Photo courtesy Michelle McLaughlin)

Panoptikon sounds like a dark, mysterious empire borne out of Star Wars or 19th century Utilitarians. Conjuring an industrial, aggressive image, there’s nothing to say it isn’t — save for Byron Laszlo. His weekly dance night in the old Club One space has thrived with the support of a devoted fan base. But the atmosphere is far from that darkness he so masterfully plays off.

“The objective of Panoptikon has been the same,” Laszlo says. “People come to have an awesome time. We welcome all crowds and anybody who wants to feel comfortable in their own skin.”

But it has been a hell of a road. Laszlo — who goes by the handle Lord Byron, the Romantic poet his mother named him after — has overcome a wild youth, a battle with alcohol and living in the closet all to pursue his passion for the nightclub scene.

Laszlo grew up with the classic rock and disco of the ‘70s but started hitting Deep Ellum clubs as an underage teen in the New Wave ‘80s. That fascination grew into infatuation with the hip, older crowd and underground venues like Video Bar and Aqua Lounge. He was hooked.

“I never really had that DJ talent — I just wanted to play music,” he admits. “It was about 1991 where I wanted to be on that side of the business and so I made this mixtape of music and I was hired at Aqua Lounge. “

Laszlo went on to become a staple in the scene, but in 2000, he pulled away from it all. He had to.

“I was drinking heavily and I wasn’t handling those consequences very well,” he says. “It was very fortunate I never went to prison.”

After five DWIs, he realized his problem and immediately quit alcohol altogether — even mouthwash. Laszlo asserts that while he may not crave a drink anymore, he hasn’t been perfect. And his healthier path didn’t come without worry.

“I missed being involved with clubs and I wanted to get back into it, but I didn’t know if I could do it sober,” he says.

Six years ago, Laszlo boldly walked into Club One to pitch his idea to the Martinez family, the new owners. While Deep Ellum was undergoing a surge in hip-hop music, he had to convince them to host a weekly party featuring everything but that. Such a decision at that time could only be poison for a nightclub.

“Hip-hop was hot, but I wanted something that would get more people to want to go out,” venue manager Shelley Martinez says. “I felt Byron was the perfect fit and his music helps people get to a place of happiness. That’s why I continue to stay beside him.”

Panoptikon will celebrate six years next month, overcoming any stigma from the hip-hop environment, the lingering gay aura of the old Club One and the general fear of Deep Ellum. He has reconfigured the Friday night event, adding bands and burlesque to the usual mix. His changing recipe keeps a devoted crowd and offers something for new fans as he reaches out to SMU students, the Cedar Springs regulars and anyone else willing to party for the mere fun of it.

“Shelley stuck with me the whole time. I’ve fought like hell for this and succeeded,” he says. “Some people may look at us and call us Gothic, and while I’ll play that sometimes, the music is universal from Robyn to German electronica to the Yeah Yeah Yeahs.”

Laszlo started out Panoptikon on a more musically aggressive note. Over the recent past, that music has taken on a happier vibe. Coincidentally, Laszlo came out about two years ago. His partner Jiri noticed the evolution.

“Every year I make an anniversary CD and he told me he could hear this progression,” he says. “Taking a step back to look at it, it made sense.”

Laszlo lived a sheltered life abetted by depression. Fearing judgment, he even remained closeted during the first year of their relationship. He gives his partner the credit to face facts.

“I have a very wonderful partner and he was so encouraging,” he says. “I fought it very hard and wore a lot of masks. Then we just decided to let everyone know.  I was already the black sheep of the family; I might as well be the gay black sheep. And it’s been the best thing.”

He has expanded his party empire to the monthly throwback Disco Versus Retro, a night of ’70s and ’80s music that brings him full circle to the music he grew up with. He hadn’t realized April’s event was the night’s three-year anniversary.

Where Panoptikon veers in all directions with an eclectic mix of people and sounds, D v. R celebrates trash disco and the irreverent ’80s with attire that includes afro wigs, shiny clothing and even roller skates — and not even in an ironic fashion.

“It is such a blast and our way to reach out to patrons who might not come to Panoptikon,” he beams. “Plus, the club has this big wooden floor and it’s so great for skates!”

As for getting the Cedar Springs crowd to stop in to one of his nights, Laszlo is quick to offer a spiel. It’s nothing rehearsed because Laszlo has a way of speaking that every word comes out heartfelt.

“We’ve always had an LGBT crowd and I know our location is probably the biggest wall for the Cedar Springs crowd but I would like them to just venture out one night our way and have just as much fun if not more. Just once. And I think they’d come back — even with friends.”
Visit PanoptikonDallas.com for Laszlo’s  calendar of events.

This article appeared in the Dallas Voice print edition April 20, 2012.