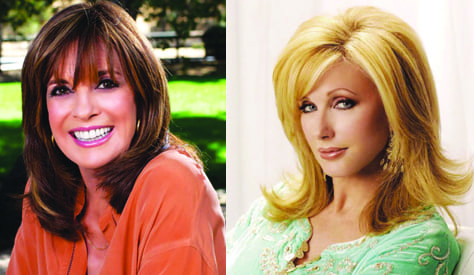 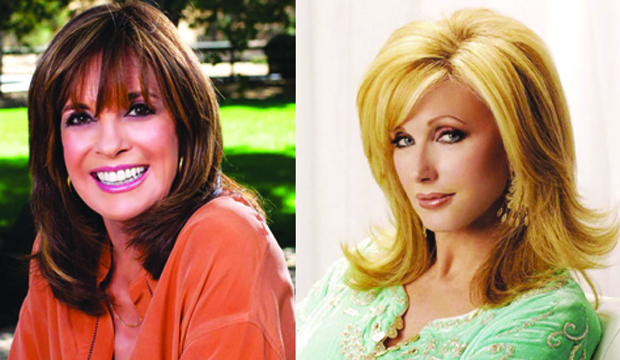 LADIES FIRST | Two TV stars who made Dallas famous, opposite: Linda Gray, for playing its booziest wife, Sue Ellen Ewing, on ‘Dallas;’ and Morgan Fairchild, a real-life native who started her career here and still credits the late gay actor Larry
O’Dwyer as her greatest influence.

When you get a half-hour to chat with Linda Gray — who, for 36 years, has been intimately associated with our fair city as the star of both iterations of the juicy nighttime soap Dallas — there’s one question you have to ask:

“How do you like having a lesbian bar here named after your most famous character?”

“Been there!” she happily chirps about Sue Ellen’s, the gay nightclub along the Strip.

“Been there, too! And with Larry!” she says, referring to the late Larry Hagman, who played Sue Ellen’s evil spouse, J.R., on the series. “I mean, how can you not go?”

She’s been there during both of its lives, in fact: The first on Cedar Springs, and the new one along Throckmorton. “I went to the new, remodeled Sue Ellen’s — it’s bigger!” she gushes.

For those who’ve followed Gray’s career, her enthusiasm comes as no surprise. Since the new Dallas began airing two years ago on TNT — it’s now on its third season, which recently wrapped its third mid-season and will return in August for seven more episodes — Gray and her fellow cast members have  frequently been in Texas, filming the series. And rather than hole up in her trailer or retreat to a fancy apartment, she’s been visible out in the community.

“I love the community,” she says. “I have friends that I met there in 1978 and [are still friends]. So when you know them, and you have those times off, Larry and I would go down there. There are so many beautiful people in the Dallas community that are so generous — they really care. I become infused in the community because I love it. The people couldn’t be nicer or more generous.”

She’s a fan of The Family Place, the Dallas Children’s Theater, and just saw her first show at the Dallas Theater Center (she recently saw its production of Fortress of Solitude and “I was amazed by it. I’m a big architecture fan and that was my first time in the Wyly”). Last year, she attended her first DIFFA gala, as well as the Burgers & Burgundy foodie fundraiser.

It’s for all those reasons, and more, that Gray is being honored Saturday at the USA Film Festival with a special sit-down chat and tribute. So what will it be like?

“I have no idea what I’m doing!” Gray laughs. So expect the unexpected.

Certainly many folks there will be expecting to hear about Sue Ellen, though … and how she has developed her over 30-plus years.

“When people ask me about Sue Ellen, I say, ‘Haven’t we all [changed]? Have you changed in 20 years?’ I didn’t want the writers to write the old Sue Ellen — it’s got to be different. But she shows us all that we are frail, all different, all individuals. That’s the cool part of playing that character. It’s what keeps Sue Ellen interesting.”

But in the recent cliffhanger, she’s started drinking again and was trapped in a burning Southfork. What accounts for such drama?

“I’ll give you the phone number of our writers — you can call them,” she jokes. “These sneaky little critters huddle up in their room in Los Angeles and [create all these scenarios]. I give them applause, though. They have so many people to pull into one 41-minute segment of time. They look at the whole picture of 15 shows and think, ‘How are we gonna end this season?’ We’re given a script maybe a week ahead [of filming], and we freak out! Then we call each other and say, ‘Do you know that there’s a ménage between us?’ For us, it’s quite interesting.”

“I thought I did that well in the ’80s — kind of a been there, done that,” Gray says. “But hang on — there’re things that will happen that will answer your questions. You just have to wait ’til August!”

Gray became a Dallas booster by choice; Morgan Fairchild — who likewise will be feted by the USA Film Festival, on Friday — was born to it. The native cut her teeth on the boards of Theatre 3 and other area companies back as a child.

“I will always be grateful to [Theatre 3 co-founders] Jac Alder and Norma Young for seeing the potential in my sister, Cathryn and me, and for giving us such wonderful training and so many fabulous opportunities as very young girls,” Fairchild says. “And we also owe a huge debt to Larry O’Dwyer, who passed away recently, who was a great mentor to us and a great inspiration as an actor. I stood in the wings and watched Larry onstage every night in every play we ever did, just to learn from him. He was a master class in acting. I was once asked who I’d worked with that I thought were the best actors. I mentioned a few, but then said, ‘I was fortunate to work with a two comic geniuses: Robin Williams and Larry O’Dwyer. And Larry O’Dwyer is every bit as great.’”

Fairchild probably has more stories than she can count about her training here, including working on the film shoot of Bonnie & Clyde (she was just 16!).

“Once, I attended a cast party for the movie and became rather depressed about the lifestyle I observed. [The next day I told O’Dwyer], and Larry gave me the best piece of advice I ever received. He said,

‘You can always walk out on reality.” And that’s what I’ve done my whole life, I just create my own, and that’s how I’ve survived in show biz.”

And survived she has. From her breakthrough on the nighttime soap Flamingo Road to full-on comedy, including playing Chandler’s transgender father on Friends, Fairchild has earned the right to live her own reality.

“I love doing comedy, and yes, it is much harder than drama,” she says. “I had a great advantage when I got to Hollywood, in that they had very few ladies who looked like me and could do comedy. For a while, I was doing a lot of the comedies [Happy Days, Mork and Mindy, Newhart] and then I got Flamingo Road, where my character’s reason for existence was to come between the two star-crossed lovers. I only had eight scenes in a two-hour movie pilot, but I ad-libbed my way through them and made them funny … and I made her a funny bitch. I did that with every series I ever had: took a one-dimensional bad guy and made her funny, so the audience was waiting to see what the hell she’s going to say or do.”

Of all her roles, though, she does have a favorite: The bitchy (surprise) fashion maven Racine on the short-lived series Paper Dolls.

“When Len Goldberg called and asked me to do her, I said, ‘She has no storyline. All she does is talk on the phone.’ It was a series about the fashion biz, and Racine was basically Eileen Ford run amok. So Len said, ‘I promise, if you’ll do the show, I’ll give you a storyline.’ Finally I said OK, but when it came time to do these boring scenes where she’s just barking orders on the phone, I just started ad-libbing these sarcastic things, figuring they’ll cut around them. But they kept them! And when it came time to do the series, they began to write to my weird sense of humor. They had a writer on staff — Donald Roos — who got what I was doing and wrote to it, and we had so much fun! I hope they have some of those scenes in the reel clip at the festival!”