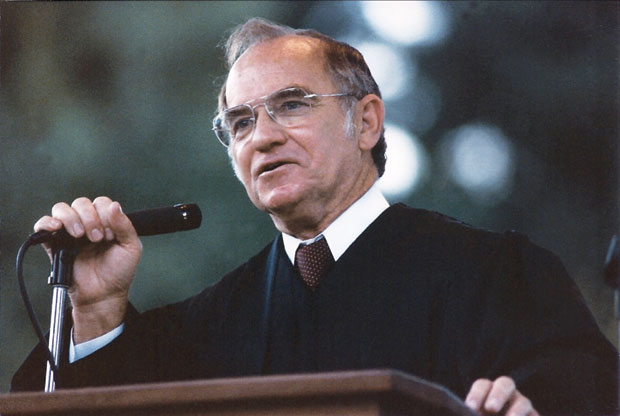 BLIND JUSTICE | Judge Jerry Buchmeyer had no idea when he issued his 1982 ruling in Baker v. Wade that he had two gay children of his own. But his lesbian daughter, Pam, said it wouldn’t have changed anything. ‘He called Baker his greatest ruling,’ she says. (Courtesy of Jon Paul Buchmeyer)

“Dad tried to decriminalize my life,” Pam Buchmeyer says. “I thank him for it.”

Buchmeyer’s dad was Judge Jerry Buchmeyer, who famously struck down Texas’ sodomy law in Baker v. Wade — 21 years before the ban would finally be declared unconstitutional by the U.S. Supreme Court. 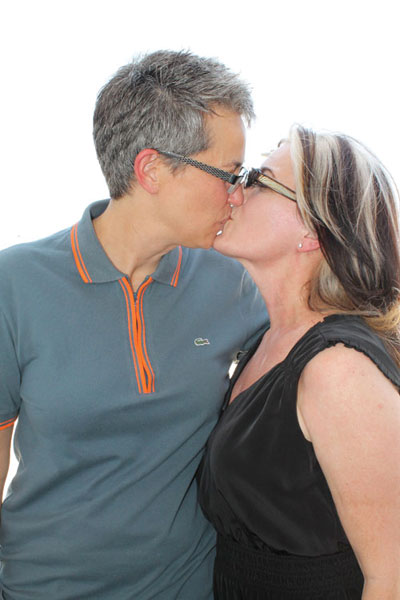 Several weeks after the decision was handed down, a celebration was held in Lee Park. (News spread slowly before the Internet, and Dallas Voice wouldn’t publish its first edition until 1984.)

In 1983, Dallas held its first Pride parade, commemorating the anniversary of Buchmeyer’s historic ruling. The timing of the celebration in Lee Park is among the reasons Dallas Pride is held in September, while most other cities hold their celebrations in June.

The ruling, which found that the sodomy ban violated the constitutional rights to privacy and equal protection, was a milestone in Texas LGBT history.

But to Pam Buchmeyer, an out lesbian, and her brother Jon Paul Buchmeyer, who’s openly gay, Jerry Buchmeyer was just dad.

“He lived a big life and I couldn’t keep up with him,” Pam says.

At the time of Baker v. Wade, she was in college. After graduating, she married and had two daughters who are now in college before coming out in the early 1990s.

Jon Paul was in grade school at the time of the ruling. Pam says if her father knew he had not one but two gay kids, he would have ruled the same way.

“He called Baker his greatest ruling,” she says.

But it certainly wasn’t his only historic ruling, and Judge Buchmeyer did more than just try to make the lives of the gay and lesbian community better.

“He was a kind, liberal jurist who saw an injustice and corrected it,” says William Waybourn, a founder of what was then known as the Dallas Gay Alliance.

Among Buchmeyer’s other rulings, he desegregated the Dallas Housing Authority, forced improvements to West Dallas housing projects and converted the City Council to single-member districts.

As a result of the latter ruling, blacks and Hispanics have been regularly elected to the council for the first time — and so have gays.

Jon Paul Buchmeyer remembers the desegregation decision from a different perspective. Although the family received death threats after the Baker v. Wade ruling, integrating the Dallas Housing Authority prompted law enforcement to place federal marshals outside the house, and they followed Jon Paul to and from school.

Pam, who is now an attorney practicing part time as a reservist for the U.S. Small Business Administration, says her father explained at the time that putting together the Baker v. Wade case wasn’t easy.

Because the sodomy law was generally used to intimidate rather than to prosecute, finding the right plaintiff to test the statute proved a challenge.

“This criminal statute that’s never prosecuted is used to deny employment,” Pam Buchmeyer says, recalling her father’s explanation to her.

He understood that it was used to criminalize and demonize people in family courts.

“You had to lie and hide or you’d lose rights to your children,” she says. 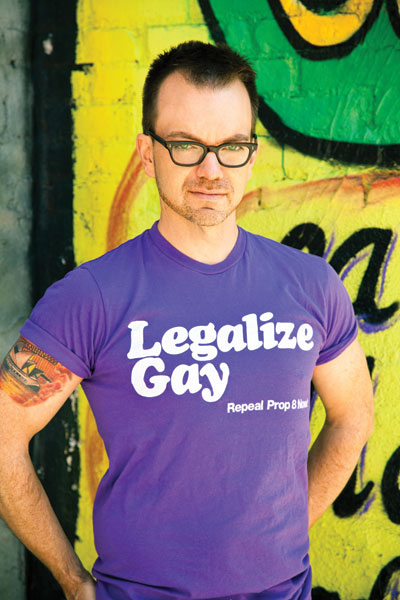 The plaintfiff in the case, Don Baker, was a Dallas Independent School District teacher and president of the Dallas Gay Alliance. After coming out as gay in a television interview, he lost his job. He agreed to be the plaintiff in a case challenging Texas penal code 21.06, which reads, “A person commits an offense if he engages in deviate sexual intercourse with another individual of the same sex.”
Waybourn says he was the perfect plaintiff.

AIDS Services Dallas President and CEO Don Maison was an attorney at the time. His law partner Jim Barber was Baker’s attorney.

He says that as DGA president, some people in the community didn’t think he was confrontational enough.

“But what he did in that lawsuit was very courageous,” Maison says.

“He was the whole package,” she says. “His passion in education carried over into activism. His life was about dispelling myths and stereotypes.”

Buchmeyer had been appointed U.S. District Judge for the Northern District of Texas in 1979. At the time, Baker said he was glad the case was assigned to a new judge who he thought might render a more favorable ruling.

Waybourn says when they got to the courtroom, they saw Buchmeyer’s young son in the court.

“There’s something unusual going on here,” Waybourn says he thought at the time. “It was remarkable and out of character for a Texas judge. It gave us a ray of hope.”

Jon Paul says he remembers the trial vividly. He was 13.

“My father said he thought it was important for me to see,” Jon Paul says. “It was about civil rights and someone fighting in the face of adversity.”

While Waybourn says seeing Jon Paul in the court is one of his clearest memories of the trial, Jon Paul says Baker is his.

He says at the time there weren’t positive images of gay people in media.

Jon Paul says he knew at the time of the trial that he was gay. However, when he came out to his father about five years later, Judge Buchmeyer maintained he had no idea about his son’s sexual orientation.

Today, Jon Paul echoes his sister’s comments about the case.

And he believes that was why his father had him attend the trial, even though he didn’t know he was gay.

“I could become a civil rights hero like Don,” he says.

“With Baker, Dad felt he was paving the way,” Pam says. “He was on the cutting edge.”

She says she doesn’t know where her father’s liberal streak came from.

“He grew up in East Texas in the Jim Crow South,” she said.

And while Waybourn, who kept in touch with Buchmeyer for years after the trial, says the judge was quite comfortable with gays and lesbians, his two gay children remember him differently.

“He had conflicted, homophobic feelings,” Jon Paul says. “It was very hard for me most of my adult life.”

He thinks his father based his decision finding the Texas sodomy law unconstitutional strictly on the facts of the law.

Buchmeyer took quite a bit of time to write his 20,000-word decision. Jon Paul remembers the reaction in the courtroom.

“Some gasps,” he says. “Some real tears. Hugs. And everyone on the plaintiff’s side was in shock.”

The Dallas Morning News wrote a damning editorial about Buchmeyer in response to the decision. Jon Paul says his father didn’t often pay attention to that sort of criticism.

“But this one he cut out, highlighted, went through and explained to me why it was wrong and that one day we’d have equality,” he says. “It was always on his bulletin board as a reminder that when you do the right thing, there will be backlash. But that’s no reason not to do the right thing.”

Today, when rulings are issued, they’re available immediately on the Internet.

In 1982, copies of rulings had to be purchased from the Government Printing Office. After the Baker decision was released and people wanted to read it, they contacted Buchmeyer’s office. He referred them to Crossroads Market in Oak Lawn.

Waybourn, an owner of Crossroads Market, said they bought a copy and had about 100 copies printed to give away to anyone who wanted to read it. That was a bigger job than it seems now.

“That was before there was a Kinko’s on every corner,” Waybourn says.

The ruling stood for about three years.

Attorney General Mark White planned to appeal, but White was elected governor, and new Attorney General Jim Mattox refused to do so. However, the 5th Circuit Court of Appeals gave an Amarillo district attorney standing and he appealed.

The Buchmeyer decision was overturned by a three-judge panel of the 5th Circuit, and that ruling was upheld by the full court in 1985.
Maison calls the 5th Circuit’s ruling a hodgepodge.

“It’s utter reliance on mores, morals, tradition had nothing to do with the law,” Maison said. “It was purely political.”

Soon after the ruling was overturned, Waybourn invited Buchmeyer to speak at a DGA meeting. From that talk came one of his most famous quotes.

“There may be justices sitting in the 5th Circuit, but there’s no justice in that ruling,” Buchmeyer told the group.

Baker appealed to the U.S. Supreme Court. But the Supreme Court decided to hear a Georgia sodomy case instead. The court’s ruling upholding Georgia’s sodomy law, Bowers v. Hardwick, stood for 18 years before it was overturned in 2003 by Lawrence v. Texas.

Pam says her father felt vindicated by the 2003 decision that concurred with his ruling from more than two decades earlier. But she said he wasn’t surprised because he knew he was right all along.

Baker and his partner, Mike Hartwig, moved to Boston in the mid-’80s after the 5th Circuit decision. Hartwig got a teaching job. Baker taught software applications for a computer company.

At the time of his death from brain cancer in 2000, Baker was enrolled in Harvard Divinity School, fulfilling a lifelong dream.

When not practicing law, Pam keeps busy writing mysteries for mid-grade readers. In the ’90s, she was an award-winning writer for Dallas Child magazine and was fired the day after a report appeared mentioning her as one of Buchmeyer’s gay children.

Jon Paul lives in New York and also writes. This summer, he and his partner Juan Pablo were legally married. He credits his father with paving the way.

Buchmeyer retired from the bench in 2008 and died in 2009. While his primary impact on Dallas has been through his rulings, people who knew him remember him for his keen sense of humor.

The Georgia sodomy law upheld in Bowers prohibited sodomy between any two people, not just gays.

“He used to joke that in Georgia, no one gets a blow job,” Pam says.

Not many Texas judges were performing same-sex weddings 20 years ago, but Buchmeyer officiated at quite a few.

Pam says he always ended the ceremony with the line, “By the power that should have been invested in me, I now pronounce you …”

This article appeared in the Dallas Voice print edition August 10, 2012.