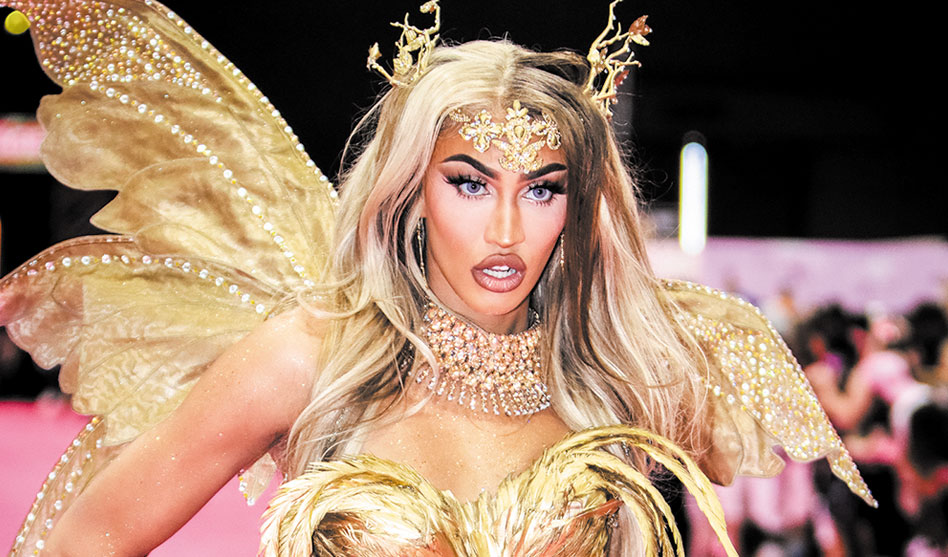 Kerri Colby left Dallas to find drag and to find herself; now she is returning in full authenticity

Whoever it was that said you can’t go home again never met Kerry Colby. Not only is she coming home this month, she’s coming home in style, as her authentic self, to headline the inaugural Tx Trans Pride celebration on Sept. 30.

Kerri was born in North Dallas in 1996, growing up close to Highland Village in what was, she said, “a very religious household.” It was neither a comfortable nor supportive environment for a young queer child, prompting Kerry to move out as quickly as she could.

She was about 15 when she made her way to Oak Lawn, eventually meeting someone who knew her from her posts on Instagram and who took her in and gave her a place to live until she turned 18.

“It was my opportunity to finally grow up and start to explore who I am,” Kerri recalled. “It’s why I am so confident in who I am now.”
It was during that time that Kerri began to “experiment with fashion and makeup,” and when she “went to my very first Block Party.” She wasn’t actually dressing in drag then, she said, “But I was trying to explore my femininity.”

Kerri continued, “My introduction to the world of drag came from watching RuPaul’s Drag Race. I was just getting acclimated to living outside of my parents’ household. And I was watching the season with Alyssa Edwards, and I was so obsessed.

“I felt so seen,” she said. “I felt so heard. It was like, aha! I get it I love it! And I wanna know more! It was like, these people are queer. They are exploring their own identities, playing around with makeup and making themselves feel like their very own super heroes.”

It wasn’t until 2018, after she had moved to Los Angeles, that Kerri began actually doing drag herself. Even then, though, she had not yet begun to think of herself as transgender. 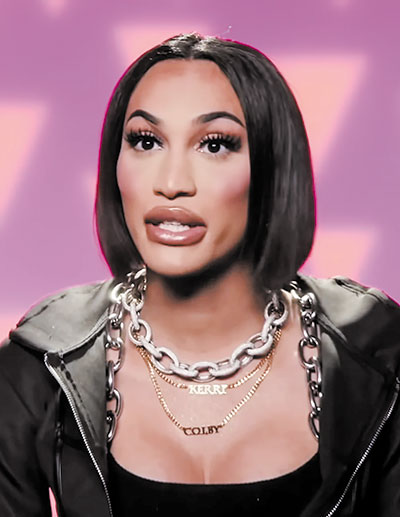 “I didn’t know my journey at that time,” she said. “But I knew there was more. I never really felt complete or content or truly happy.”

“He was my half-brother on my dad’s side. The only other biracial child in the family. The two of us looked the most alike — same Black dad, caucasian mothers,” she explained. “He was only 38, really young. He had a beautiful daughter, a wonderful wife. It really shook me to my core. It made me realize, I need to be authentic now, because you never know what’s going to happen tomorrow.”

It was then, Kerri said, that she felt “a quickening” inside her. It was then she began to think about things like “What is it I really want to do with my life? What makes me happy? What makes me feel connected to this earth and to this life? I thought about my brother’s death, and I thought it would be such a shame to leave this earth feeling like I never knew who I was. I knew I was not who I had been told I was, not who I was expected to be.

So I decided to dive in and start exploring myself.”

Drag was part of that exploration — but not drag for anyone else’s benefit, not to be on TV. “What was drag for me? It was a way to be seen. To be heard. To be alive. I was excited to live my life and learn how to be myself.”

Then she had another insight. Kerri said she was doing drag for herself, but she also knew that “if drag is what makes me feel complete and accepted, then I want to be the best.”

So she auditioned for RuPaul’s Drag Race. And she didn’t make the cut first time around.

“I didn’t make it, and so I started thinking about why I didn’t make it. What did I do that I was not the most authentic me?” Kerri recalled. “I began to realize that I did not feel like a boy who puts on makeup to look like and feel like a woman.”

Then the COVID pandemic hit, and, like everyone else, Kerri found herself locked down and spending long stretches of time alone. “I was stuck alone with myself for so long that I couldn’t run away from my own truth anymore,” she said. “That was the ultimate thing I always ran away from out of fear. I had been so afraid to transition, so afraid to take that last step.”

So in 2020, Kerri began taking hormone therapy and it was, she said, “the most authentic I have ever felt. So I decided to use that authenticity and audition for Drag Race again.

“To be openly transgender and be walking into Drag Race was not a common thing,” she continued. “I was very nervous, but at the same time, I knew: I’m not just a drag queen; I am a person transformed by drag. I am not just projecting female; I am female. There was magic in the air, a driving force of positivity and confidence.”

On that second audition, Kerri was cast as one of 14 contestants in Season 14 of Drag Race.

“It only happened because I dared to be different,” she declared. “I dared to hold myself accountable for being myself.”

Now Kerri is daring to not just hold herself accountable but to put herself out that as an example of authenticity for others.

She was in Dallas earlier this month to participate in closing ceremonies for the Gay Softball World Series. Now, she said, “I am so excited to be coming back to be part of Trans Pride in Dallas, Texas, of all places!,” she said. “Since I first made my way into Cedar Springs scene, I so much admired the trans community there. I was literally obsessed with them. And now I am coming back!

“That was the first time I had been back to Dallas since I left in 2018, and now seeing people like us to have a place to celebrate and proclaim ourselves here in traditional Dallas.

“The younger me feels so healed and so validated coming back to Dallas. It makes me so emotional to think of it. I had only dreamed this reality could exist, and here it is.”

Because she had not been back to Dallas since she left in 2018, Kerri said she had some anxiety about coming back first for the World Series and again now for Trans Pride. “Part of that anxiety was that nobody here knew me like this. But I was able to rekindle relationships with some people.

To finally really come home now, and to be coming celebrated, coming home wearing the trans banner, walking in 100 percent me — it is such a freeing feeling.

“I want everyone to know I am finally at a place of euphoria, and I can’t wait to share that with the people who helped me get here.”

Kerri has rekindled relationships here in her hometown, but not the relationships with her parents. But that won’t stop her or hold her back.

“But I don’t crave their acceptance. I don’t need their acceptance to feel fulfilled,” Kerri added. “I am human. I am perfectly, authentically, fearfully and wonderfully made. And I refuse to tolerate disrespect out of sympathy for a family tie.