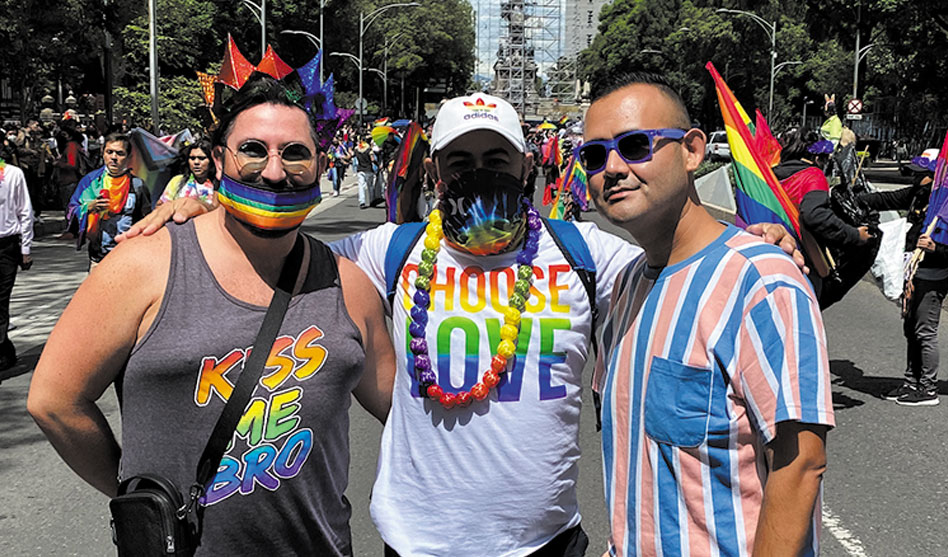 DFW residents who attended Pride in Mexico City include, from left, Russ May, Martin Rivas and Edwardo Villanueva.

Even though ‘official’ organizers for México City Pride cancelled in-person events because of COVID, trans activists and their supporters marched anyway

MÉXICO CITY — México City hosted its 43rd annual Pride March/Pride Parade on Saturday, June 26, with a little more than 30,000 people participating. This year’s event was much smaller than the 1,000,000-plus participants usually seen in years past, and this parade almost didn’t even happen at all.

The committee that has organized México City’s Pride parade for years — the Marcha del Orgullo LGBT de la Ciudad de México (Mexico City LGBT Pride March committee), referred to as the “committee” — had cancelled its event again this year due to lingering concerns over COVID-19 and was instead again having a virtual Pride event, with prominent talent streaming on Facebook and YouTube.

But prominent México City transexual Lola Dejavu Delgadillo Vargas, secretaria at Agenda Nacional Politica Trans de México, and others in the trans community and in various LGBTQ organizations were not satisfied with the committee’s plan. So they joined together to hold an actual Pride parade titled “La marcha es de quien la marcha,” which translates to, “The march belongs to whomever marches.”

On social media, here in México, it was like dueling LGBTQ Pride parade groups vying for attention, a battle between the “official” Pride Parade Committee and the trans community and their supporting organizations. Some in the Dallas/Fort Worth LGBTQ community were confused about what was happening. Several contacted me, asking if there was really going to be a parade, and if all Pride events had been cancelled. I told them there would be a parade, although it might be smaller than usual, and that most of the bars and circuit parties would be open for business. 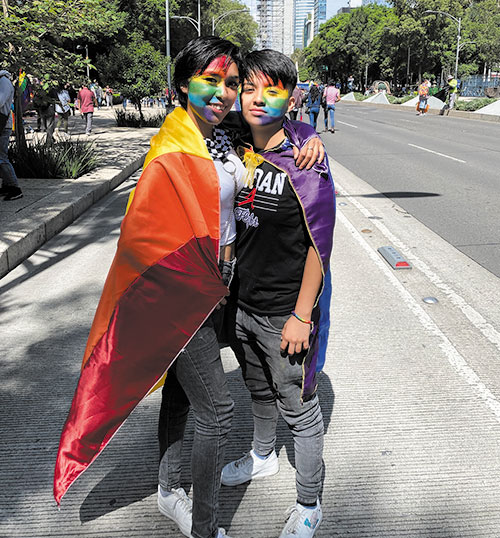 LGBTQ community leaders and members took to social media to make it known that the “official committee” does not represent the real LGBTQ community and that the committee was just a group of self-appointed “careerists” who only have their own personal and political interests in mind. Committee members admirably chose not to respond to personal attacks, though they represented themselves as the “official” voice of Pride.

But this is México. Here, we can have disagreements without filing lawsuits, and we end up with something positive. And that is what happened on Saturday morning, June 16, beginning at 11 a.m. when people from all around México City and surrounding municipalities started gathering at the Angel of Independence. The Angel is located in La Zona Rosa, which is considered the heart of México City’s LGBTQ Mexico City community and is well known in the Republic of Mexico as “the gayborhood.”

Those arriving at the Angel couldn’t help but notice there was no stage for speeches and no loud music blaring, like there had always been in previous years. This year’s parade lacked any official sponsors, so there were no big parade floats, no big flatbed trucks representing various bars with dancing studs and parade floats by political organizations either.

But no one at the Angel seem to care, because this was an LGBTQ people’s march, similar to the first Pride Parade held in México City 43 years ago. In fact, a few of the original march participants were in the crowd. It was a superb beginning, with hundreds of people gathering, with a party atmosphere like at a Mexican family cookout on a Saturday afternoon. 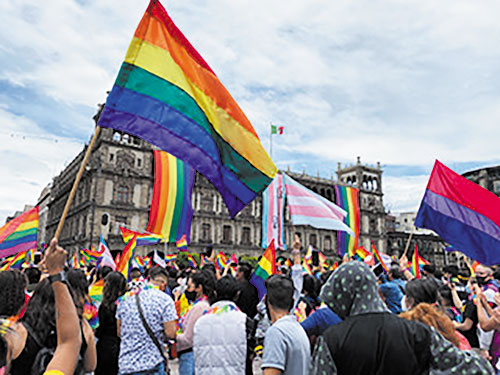 The Marcha (Parade) started at 11:45 a.m., with Lola Dejavu Delgadillo Vargas and the Nacional Politica Trans de México leading the way. The parade was to end at the Zocalo, México City’s main plaza located in front of the Presidential Palace, where the government offices where already decorated with four-story-tall gay and trans flags.

As people began to arrive at the Zocalo, many proud and emotional faces could be seen in the crowd. There were plenty of decorative outfits, with some people showing more skin than clothing. Drinking alcoholic beverages of any kind is illegal on the streets of México — except for Pride Parade day.

It was a festive march, so much so that one might not even notice there was still a COVID-19 pandemic going on. The committee that canceled its parade had done so over serious concerns regarding COVID-19. The trans community members and supporters that organized Saturday’s parade were also concerned about COVID-19, but they encouraged people to wear facemasks and to use sanitary hand gel.

Still, in a city of more than 20 million people, it is hard to keep one’s distance. But even though the streets were full of people, it was better than being in a crowded subway car with no ventilation, because there was a slight breeze throughout the day of the parade.

The Pride parade is always held the last Saturday in June during this time also being the rainy season in México City. Though it had rained most of the prior, the day of the parade was sunny, helping bring out a larger than expected crowd, especially compared to last year when the trans community organized a Parade that was also supposedly canceled but happened anyway, but with fewer than 100 attending. 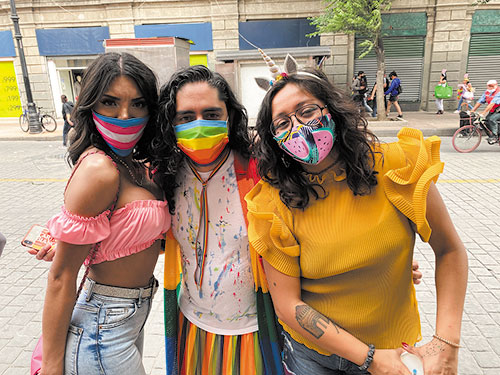 There was a good variety of LGBTQ people who gathered at the Zocalo — lots of teenagers, along with people in their twenties and thirties. There were some older people in the crowd, as well, and many people brought their children and dogs.

There were no stages set up for entertainers as there have been in years past. But no one seemed to mind; they just hung out and danced to their own music playing their smart phones. The organizers did give a couple of speeches at the small wooden platform that had been installed although the speeches were hard to hear. Still, no one seemed to mind such minor inconveniences.

The parade stepped off a little before noon, and at 4 p.m., there were still people marching into the Zocalo — a line of LGBTQ people stretching over ten blocks.

Fort Worth residents Martin Rivas, his husband Russ May and their friend Eduardo Villanueva were among attending. Rivas described the parade as being “just amazing, even if it was smaller than normal, proving that Pride keeps people’s spirits up even during a global pandemic, and that there really is a rainbow at the end of the road.”
And, he added, “You can’t take our Pride away.”

Freelance writer Jesus Chairez is from Dallas but now lives in México City. He was the producer and host of North Texas’ first bilingual LGBT Latino radio show, Sin Fronteras, on KNON 89.3 FM from July 1993 to July 2005. Chairez is a published author in the book Queer Brown Voices, a Collection of Personal Narratives of Latina/o Activism. Contact him at Facebook.com/JesusChairez.