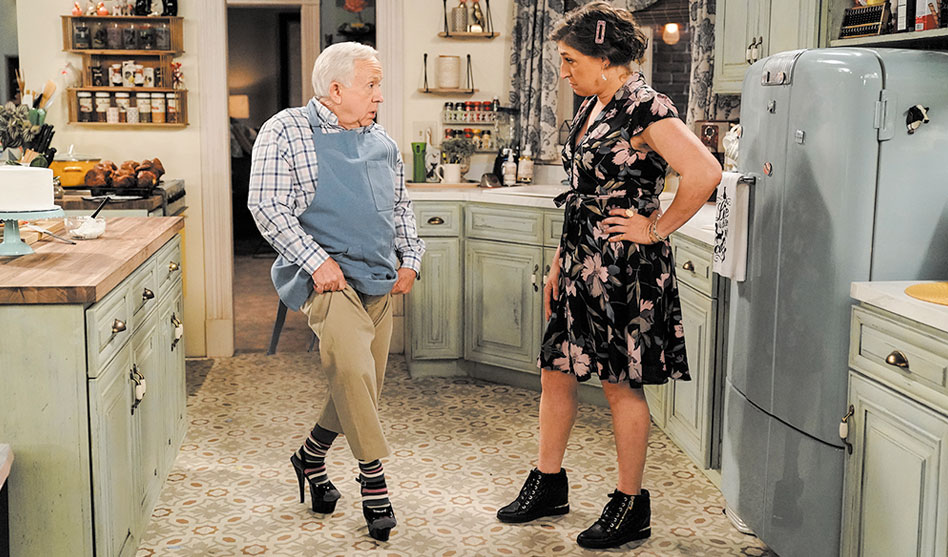 Leslie Jordan and Cheyenne Jackson, co-stars in the Fox sitcom Call Me Kat, are in separate locations on Zoom, tenderly admiring each other. As an openly gay actor, Jackson (30 Rock and All Shook Up, his first lead role on Broadway) affectionately acknowledges that Jordan, who’s also openly gay, has been a mentor to him ever since he saw him as Beverley Leslie on Will & Grace. Jordan, who admits he doesn’t know how to respond to younger generations who praise him for paving the way for them, recognizes Jackson for being precisely the kind of actor Jordan is not.

Since January 2021, the Call Me Kat actors have come together weekly to make viewers laugh through a seriously unfunny and fraught time. The sitcom — which also features Mayim Bialik as Kat, and Swoosie Kurtz as Kat’s mom Sheila — is now in its second season after premiering during the pandemic. As Phil, Jordan plays the gay head baker at Kat’s cat café, while Jackson portrays bartender Max, Kat’s former college boyfriend.

Recently, Jackson, 46, and Jordan, 66, got on Zoom to chat about shooting a sitcom during COVID, the potential for Jordan to get his first onscreen kiss and why, during one episode, he moves so effortlessly in heels.

Dallas Voice: How much joy and levity has doing this show brought you during one of the most challenging times we’ll ever experience? Cheyenne Jackson: It’s brought a significant amount of joy and stability and escapism. I think that’s really what we are all craving right now, because the world feels off of its hinges. To be able to go to work every day with five other people whom you adore and love and are inspired by, but also just to get to do something that is just unabashedly joyful and happy — I mean, what other show at the end of it has a curtain call? An old-timey curtain call!

It’s really just been such a gift. I know people overuse that phrase, but it truly has [been], being able to be home with my kids, go to work and then be home every day in time for dinner. I’ve only missed, maybe, two bedtimes this whole run. And when we have a week off, I definitely start to miss everybody and can’t wait to get back.

What about you, Leslie? What has the show meant to you, especially as a source of connection during a time when it’s been so hard to connect with people? Leslie Jordan: We had an amazing beginning because we were going to shoot the pilot, and then the pandemic hit. We got to meet each other over Zoom. I don’t think any of us really knew each other. I had worked with Cheyenne a couple times, but none of us were friendly-friendly. And all of a sudden during the pandemic, with the Zooms and getting things ready, they said, “The minute this is over, we’re going back.” When people didn’t even know if they were going to get jobs back, we knew what was ahead, we knew what was coming, and we just kind of bonded. And so by the time we got all of us together, we were just giddy. We just loved each other so much.

I have appreciation for the show’s queer inclusivity, and I’m getting a real kick out of seeing Cheyenne playing one of the straightest men I’ve ever seen. He’ll walk over to me, and then he’ll go, “Listen, girl,” after he’s just been the butchest.

What’s it like being a part of a show that touches on some really important LGBTQ-specific topics? Jordan: You know, I feel so protected. I don’t know what it is. I just feel like I’m [in] this cocoon because, you know, writers come, they go, this one in and out. But right now we’ve got some writers that came from Will & Grace and wrote my Emmy episode [Jordan won in 2006 for Outstanding Guest Actor in a Comedy Series]. So everything they write, I adore.

Listen, I’ve done some stinkers over the years. But every week the scripts just get better and better and better. And we’re like, “Wow, they’re touching on all kinds of topics.” They were whispering the other day that they want to give me an onscreen kiss. I said, “Oh lord.” [Laughs.] That’ll be a first!

Who do you want to play that role, Leslie, is the question? Jordan: Well, we approached Rob Gronkowski, that football player. I’m making that up. We did not approach him. [Laughs.] I think he would be good, though; they should ask him. I’ve got such a crush on him. I don’t even watch football, but I’m glued to that TV.

One of the episodes this season touches on LGBTQ aging. Leslie, how did that bit about the unique experience of aging for LGBTQ people make it onto the show? Was that your doing? Jordan: People think that as actors we have a lot of say, and maybe other actors do, but I don’t particularly … I’m the kind of actor that I think writers love because I show up and just say their words [laughs]. … I’m very reverent. You do your job. I’ll show up and bring it to life. Just give me the words. So no, I had nothing to do with that at all. They came up with it. I just loved it. 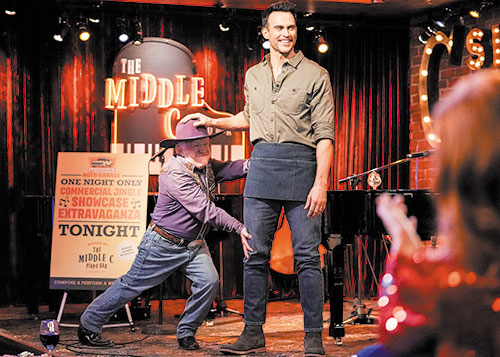 Leslie Jordan, left, and Cheyenne Jackson on the set of Call Me Kat

Jackson: I am of like mind with Leslie that my job is to be a conduit. I go in there, and I take what they give me and portray it. But so much of what they’re writing now, I do believe they’re taking from our own lives and who we are in the world. So when they give Leslie a monologue like he did in the car about [aging] as Max, I feel like crying as Cheyenne because Leslie’s so brilliant, and Swoosie is so brilliant. The two of them together, I just love their dynamic.

Did you two first meet on the set of American Horror Story? Jackson: We were trying to figure this out the other day. I think it must have been.

Jackson: But I’ve known who Leslie was forever and was a huge fan of Will & Grace, and I can quote all of his stuff, and I constantly do to him. It’s one of the joys of this.

Jordan: I just wish he’d butch it up a little bit sometimes when he’s doing it. [Laughs.]

Jackson: One of the biggest joys of this has been to get to know Leslie on a true friend basis, because the queer experience in Hollywood is, you have to have lived it to understand it. And I’m in my mid 40s now, and you know, I’ve been around a while. So I love to have mentors, and I love to have queer mentors. And Leslie has stories and advice and just so much wisdom. And sometimes, if I’m stuck on a line, I will go to him and say, “How do I make this funny rhythmically?” and he’ll say like, “Hit that, hit that, and then just drop that.” It’s just so intrinsic in him, whereas multicam is still new to me. So it’s one of my favorite things, being on a show with you.

I’m sure Cheyenne is not the only person to have told you that you’re a queer mentor to them. What is it like to hear that from other people in the LGBTQ community? Jordan: I mean, I don’t get up in the morning and think, “The mentor has gotten up.” [Laughs.] You know, when I got to Hollywood in 1992, West Hollywood was where I dropped anchor. Queers were everywhere, and I thought, “Wow.” And then the crisis hit — the AIDS epidemic, which I’ve seen so many parallels between this pandemic and the last one. 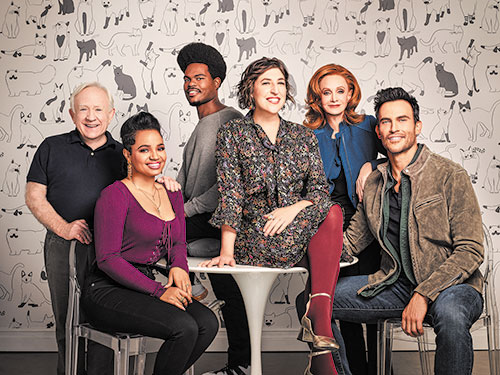 I’ve been through it. I’ve been through a pandemic. I was on the forefront of Project Angel Food when it got started. I was right there in the meetings when Project Nightlight got started. I was around, and I did my share, and I’m very proud of that. And sometimes I look back and think, “Own it.” It’s so hard for us. My boyfriend constantly says to me, “When someone compliments you, Leslie, you compliment them back.”

I’m working on that. I’m working so hard on that. Anyways, whatever. Where were we? What was the question?

Leslie, you can really work some heels. I know you’ve joked before that you came out of your mom’s womb and immediately stepped into her heels, so is that why you are such a pro at dancing around in them on Call Me Kat? Jordan: [Laughs.] No, it’s because I did drag when I was about 19. We would have drag parties, and I was in my hometown; you couldn’t get in the bars at 17. So we’d have these drag parties up at this doctor’s house — this very wealthy doctor — and we would put together drag shows, and I was Miss Baby Wipes, that was my name. The sweet and petite Miss Baby Wipes. And I could work that stage. I’d do Tina Turner numbers and stuff, when they were all doing Barbra Streisand.

Jackson: I knew that you’d be good in heels, but when we had that episode with heels the other day, and you popped them on, he was like “bum, bum, bum, bum, bum!” It was amazing. I can’t do that.