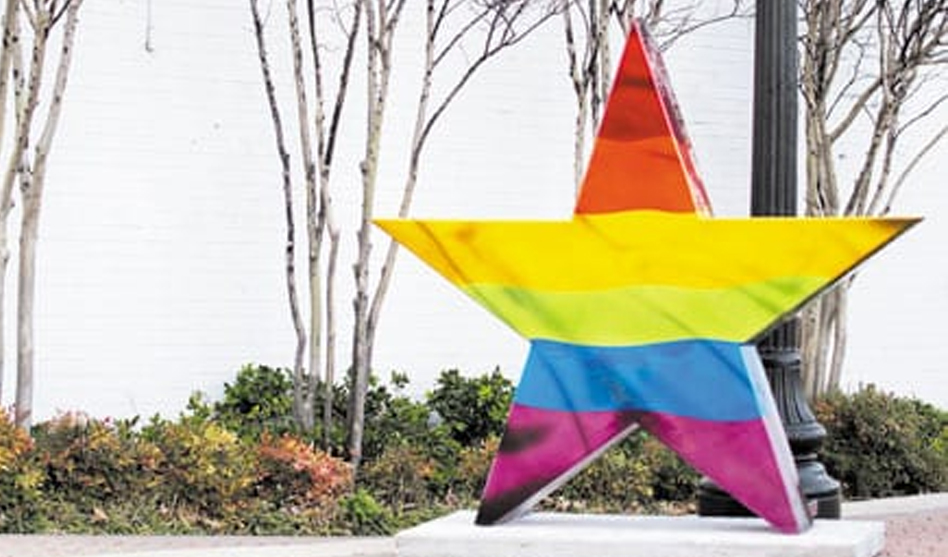 The Rainbow Texas Star, designed by Izzy Espinosa and located at 201 W. Main St. in downtown Arlington, is one of several different Texas Stars located around the city. (Photo by Cassie Quinn)

The Arlington City Council voted tonight (Tuesday, June 8) to approve a new ordinance and amend the city’s existing nondiscrimination ordinance to prohibit discrimination in housing based on sexual orientation and gender identity.

According to analysis provided to the council by city staff, “to provide protections for Arlington residents and visitors against discrimination, the ordinances under consideration would ensure that no one is denied employment, housing or public accommodation based on race, color, national origin, age, religion, sex, disability, sexual orientation of gender identity.”

The staff-recommended changes were to amend the Fair Housing ordinance to include sexual orientation and gender identity to the list of those protected from discrimination in housing, and create a new Anti-Discrimination Ordinance prohibiting discrimination in employment and public accommodations.

Arlington council members have spent time in numerous afternoon session discussing how to improve the city’s score on the Human Rights Campaign’s annual Municipal Equality Index, according to the Fort Worth Star-Telegram. The Fort Worth daily notes that the city scored an 11 on the index in 2013, and since that time has managed to increase that score to a 63 on the 2020 MEI.

In its ongoing efforts to improve its MEI score and better serve its LGBTQ residents, the city of Arlington reports hate crime statistics to the FBI each year, adopted nondiscrimination policies for city employees and contractors, began groups and liaisons for LGBTQ employees and has supported grants and in-kind assistance to support LGBTQ programs for the community, the Star-Telegram reports.

DeeJay Johannessen, CEO of HELP Center for LGBT Health and Wellness which is based in Arlington, was one of six residents who spoke up in support of the changes at tonight’s meeting, recounted to council members how, when he first moved to Arlington in 1998, a landlord refused to rent to him and his then-partner because renting to two tenants of the same-gender was against their policy.

Johannessen, who is married to Arlington real estate agent and Arlington Museum of Art Director and Board President Chris Hightower, also accepted a proclamation from the city council tonight honoring June as LGBTQ Pride Month. He has been a leader in the push to get the city to approve nondiscrimination protections for LGBTQ residents.