Come From Away kicks off a new season of musicals in the Broadway at the Bass series. (Photo courtesy of Bass Hall).

The return of theater in this time of COVID continues in downtown Fort Worth. Musical blockbusters highlight this season’s Broadway at the Bass, and next Tuesday, Oct. 19, kicks off a new season with the Tony-winning musical Come From Away.

This marks an exciting time for Performing Arts Fort Worth, which oversees the operations and management of Bass Hall.

“One thing is clear: Fort Worth is just as ready for Broadway to return as we are,” Performing Arts Fort Worth President & CEO Dione Kennedy said in an email. “We are so grateful to our patrons and community for their support during this long intermission and can’t wait to welcome them back to Bass Hall this fall.”

Based on real-life events during 9/11, Come From Away follows the story of commercial flights that were ordered to land in Canada after the attacks on the World Trade Center and the Pentagon and the crash in Pennsylvania, with both residents of the Canadian town and stranded travelers as characters. Among them is the same-sex couple known as the Kevins — Kevin T. and Kevin J. And in this production, actor Jeremy Woodward plays one-half of the couple. 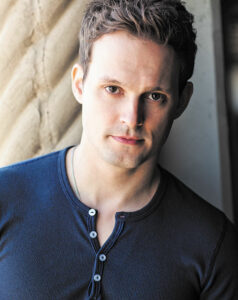 In real life, Kevin Tuerff was on his way back to Texas with his partner at the time, Kevin Jung, when their flight was diverted. Tuerff has perhaps been the more visible of the two in subsequent interviews about the show, which he contributed to when writers Irene Sankoff and David Hein approached him.

Woodard said he has yet to meet Tuerff, but if/when that happens, he has questions: “Even though these characters are based on real people, we’re not asked to act like them. But if I had access to him, I’d have things to ask.”

Tuerff has become signature for his plaid jacket, which Woodard also dons in the show. He’s been called a gay lumberjack, he said with a laugh, which has given him some approach to his character.

“I think that speaks a lot about his personality, and he was relatable to me,” Woodard said. “He wants to get out, go get a drink. I think if I were in his shoes, that would have been me.”

In his own way, Woodard parallels the premise of Come From Away to today’s pandemic. People were isolated then and couldn’t get out to do what they wanted or needed to do. But there are also similarities in how the passengers then had to be resilient, just as we have to be now amid the pandemic.

“You can’t shut down,” Woodard said. “They had to be careful and cautious in their approach to things. Sounds a lot like today.”

Those parallels have helped Woodard shape his character with personal experience. He added that telling this story of coming together is similar to what everyone is going through now. His personal experience is doubled by the fact that he also remembers 9/11.

“I had graduated college that summer and was about to move to New York,” he recalled. “I was 22 at the time.

My dad and I went to New York because I was moving there the January after, and there was just this weird smell in the city. It was something else, but also, people just seemed so aware of each other.”

There’s also the notion that the mention of 9/11 automatically refers to New York City. In this show, Woodard has to resolve his character’s confusion with his own personal knowledge.

“That’s the thing. I remember what was going on first-hand, of course,” he said. “Playing Kevin [who didn’t know] while also knowing what was happening at the same time is a peculiar thing.”

Woodard’s counterpart — or his work husband, if you will — is actor Nick Duckart who plays the other Kevin. Both actors identify as straight, but they have bonded over their characters.

“People say we are the bro-iest Kevins, but right away we were good. We had met before, but 90 percent of it is working with good people, and Nick is that,” he said.

The story doesn’t focus solely on the Kevins, so the relationship — which has its ups and downs in the show — may lack its nuances. But Woodard said that was also in service to the show.

“We worked on little things with a touch of affection, but in the story, they were a little wary of people knowing they were gay,” he explained. “In that way, we played it honest to that effect, but also addressed it in funny and lovely ways.”

Woodard suggested for those unfamiliar with Come From Away to go into it blind. Don’t listen to the music; don’t read too much on it. Because then it will be an emotional surprise to everyone.

“It’s 90 minutes, no intermission. But there are many moments that even made me get a lump in my throat,” he said. “The acting is emotional, and people who don’t know the show will feel that emotion when it happens, and it’s beautiful. I may be biased but I think it’s a perfect show.”

Come From Away opens Tuesday Oct. 19 and runs through Oct. 24 at Bass Hall, 525 Commerce St., Fort Worth. For tickets or information, visit BassHall.com.