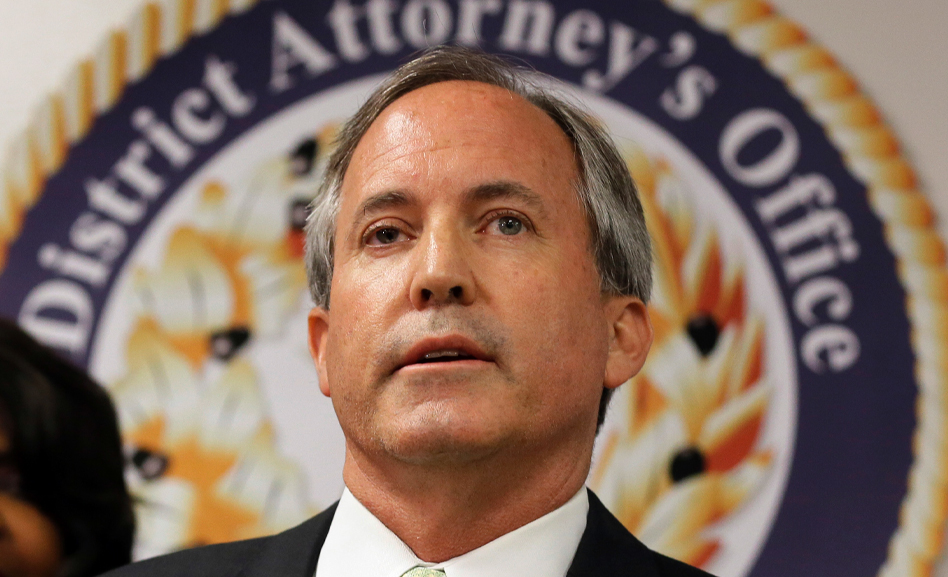 Texas Attorney General Ken Paxton seeks to fend off legal troubles and win a third term as Texas’ top law enforcement official, but his agency has come unmoored by disarray behind the scenes, with seasoned lawyers quitting over practices they say aim to slant legal work, reward loyalists and drum out dissent. (AP Photo/Tony Gutierrez, File)

GATESVILLE, Texas — Texas Attorney General Ken Paxton’s staff this month quietly dropped a series of human trafficking and child sexual assault cases after losing track of one of the victims, a stumble in open court emblematic of broader dysfunction inside one of America’s most prominent law offices.

The Republican has elevated his national profile in recent years, energizing the right by rushing into contentious court battles that have affected people far beyond Texas. He has fought access to abortion, Democratic immigration policy and the outcome of the 2020 presidential election.

But as Paxton seeks to fend off legal troubles and win a third term as Texas’ top law enforcement official, his agency has come unmoored by disarray behind the scenes, with seasoned lawyers quitting over practices they say aim to slant legal work, reward loyalists and drum out dissent.

An Associated Press investigation found Paxton and his deputies have sought to turn cases to political advantage or push a broader political agenda, including staff screenings of a debunked film questioning the 2020 election. Adding to the unrest was the secretive firing of a Paxton supporter less than two months into his job as an agency advisor after he tried to make a point by displaying child pornography in a meeting.

The AP’s account is based on hundreds of pages of records and interviews with more than two dozen current and former employees, many of whom spoke on condition of anonymity out of fear of retaliation or because they were not authorized to talk publicly.

In the small town of Gatesville, the fallout was felt this month with the collapse of cases dubbed “Operation Fallen Angel.” Six of the people indicted last year on allegations that they were involved in a scheme to force teenage girls to “exchange sexual contact for crystal methamphetamine” are now free. One is being held in the central Texas community on other charges. An eighth died in jail.

“It’s absolutely broken. It’s just broken. You don’t do it this way,” Republican District Attorney Dusty Boyd said of the attorney general’s office, which took over the cases from his five-lawyer team. “I made the mistake of trusting them that they would come in and do a good job.”

Paxton and his staff did not respond to voicemails, text messages and email questions sent Tuesday.

For years, Paxton has weathered a storm of troubles like few other elected officials in the U.S., including felony securities fraud charges and a federal investigation into accusations of corruption . He has broadly denied wrongdoing and remained popular with GOP voters, even while losing staff.

One prosecutor said he quit in January after supervisors pressured him to withhold evidence in a murder case. Another attorney signed a resignation letter in March that warned of growing hostility toward LGBTQ employees. By August, records show the division over human trafficking cases — a major emphasis in Texas, where more than 50 migrants died in the back of a trailer in June — had a job vacancy rate of 40 percent.

“When you’re experiencing the type of climactic upheaval in an office, which affects agency-client relationships and trust, there’s naturally going to be a lot of movement among staff,” said Ron Del Vento, who served as a division chief under Paxton and four previous Texas attorneys general before retiring in 2019.

“Collateral damage is inevitable,” he said.

The latest departures are aftershocks of an extraordinary revolt in autumn 2020, when eight of Paxton’s top deputies accused the attorney general of using the office to help a political donor who employed a woman with whom Paxton acknowledged having had an extramarital affair. The deputies all quit or were fired after going to the FBI, which opened an investigation that remains ongoing.

In America’s largest red state, the accusations have not given GOP voters pause about Paxton, who carried Donald Trump’s endorsement into again winning his party’s nomination. Paxton faces Democratic challenger Rochelle Garza, a first-time candidate and former ACLU attorney, in the November election.

“He’s been one of the greatest attorneys general for the state of Texas and one of the most conservative ones in the entire country,” said Abraham George, chairman of the Collin County Republican Party, adding that Paxton deserves the same presumption of innocence as any other American.

After the dramatic exit of Paxton’s top staff in 2020, those brought into senior roles included a California attorney who donated $10,000 to help Paxton fight his 2015 securities fraud indictment and Tom Kelly Gleason, a former ice cream company owner whose father gave $50,000 to the attorney general’s legal defense fund.

Gleason was fired less than two months into his new job as a law enforcement adviser. Paxton’s office has not disclosed why, but three people with knowledge of the matter said Gleason included child pornography in a work presentation at the agency’s Austin headquarters.

The people said Gleason displayed the video — which one of them described as showing a man raping a small child — in a misguided effort to underscore agency investigators difficult work. It was met with outrage and caused the meeting to quickly dissolve.

Afterward, Paxton’s top deputy, Brent Webster, told staff not to talk about what happened, according to one of the people.

Gleason, who began his career as a police officer in the late 1970s, did not respond to voicemails, text messages, emails and letters left at this home and business. A lawyer who has represented him also did not respond to an email seeking comment.

As of August, payroll data show the number of assistant attorneys general — the line lawyers who handle daily case and litigation work — in the criminal prosecutions division was down more than 25% from two years ago. The data, which was obtained under public records law, show the group that handles financial and white-collar cases was cut by more than half and merged with another division.

“This is scary to me for the people of Texas,” said Linda Eads, who served as a deputy attorney general in the early 2000s, when she said it was rare for any division to have more than two or three vacancies.

Boyd said staff turnover in Paxton’s human trafficking unit contributed to the collapse of the cases in Gatesville. In the last two years, Republican lawmakers have doubled the division’s budget to $3 million, but Boyd questioned whether it was well spent.

On Sept. 13, the attorney general’s staff wrote in court papers that they were dismissing three trafficking cases because a witness had recanted and dropping the other four because they were “unable to locate victim.”

“For Pete’s sake, you’re the AG’s office. You can’t find the victim?” Boyd said. “The culture is broken.”

Bill Turner, who spent five years in the office under Paxton, said he quit in January after senior leaders tried to prevent him from turning over evidence to the defense in a murder prosecution. He would not discuss specifics, saying that could affect ongoing work related to the case.

“We had a difference of opinion on the ethical obligations of a prosecutor, and I didn’t feel like I could continue working in that environment,” said Turner, who was previously an elected Democratic district attorney in Texas.

Two months later, assistant attorney general Jason Scully-Clemmons left the same division, accusing a new wave of executives in his resignation letter of “directing prosecutors to prioritize political considerations.” He also said the environment had grown hostile to LGBTQ employees around the time Paxton issued a legal opinion that set in motion child abuse investigations into the parents of transgender youth in Texas.

Several other employees told AP that before Texas’ March primary elections, Amber Platt, a deputy over criminal justice cases, convened a meeting to ask about upcoming cases that would help Paxton’s reelection prospects. Scully-Clemmons, who declined to comment, referred to the meeting in his letter.

In May, the head of Paxton’s election integrity division invited his team to a movie theater for a screening of 2000 Mules, the debunked film that falsely claims to prove the 2020 election was stolen.

“General Paxton will be present, among others, and I think they would love to have a good showing from our office,” assistant attorney general Jonathan White wrote in an email.

As senior lawyers have been leaving the attorney general’s office, newcomers who’ve stuck by Paxton have seen their careers and compensation skyrocket.

Aaron Reitz, who finished law school in 2017, was hired as an aide to Paxton’s top deputy at a salary of $135,000 in October 2020. The next month, after the deputy reported Paxton to the FBI and quit, Reitz was promoted to oversee agency legal strategy, a senior job making $205,000.

In June, Reitz’s assistant sent out invitations to a “2000 Mules viewing party,” complete with barbecue. More than 90 staff and interns were later told to bring their own lunch.