AP Inc. responds to rumors over funds raised for Booker 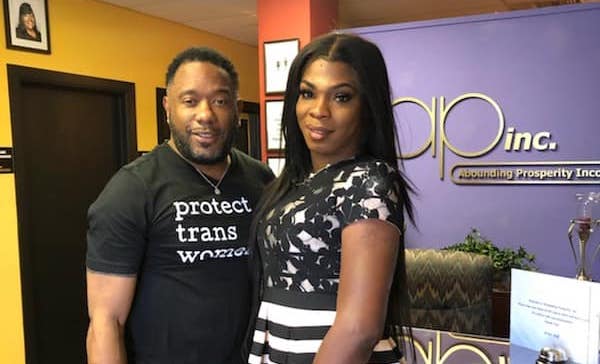 Abounding Prosperity CEO Kirk Myers answered questions today (Wednesday, May 22) about what happened to money raised through a GoFundMe campaign  for Muhlaysia Booker after she was attacked in April in her apartment parking lot following a fender bender, saying that all of the about $10,000 was refunded to donors.

Booker was found shot to death on an East Dallas street early Saturday morning, May 18.

In the month following the assault, Abounding Prosperity paid for Booker to stay in a hotel as it prepared Nicole’s House, a transitional home for transgender women, to open. And, Myers said, as far as he knows Booker had no outstanding medical bills.

“She had no clothing when she came to us,” Myers said, so Abounding Prosperity provided food and clothing as well as legal counsel for each of her visits to police, the D.A. and FBI investigators. Myers said his organization also provided access to mental health counseling for Booker.

Money from the GoFundMe wasn’t tapped, he reiterated.

Since Booker’s death, Myers has been working with her mother, Stephanie Houston. Today, they were finalizing funeral plans and meeting with the Dallas County District Attorney. Houston told Dallas Voice she wished the money collected through GoFundMe could have been used by Abounding Prosperity.

“I prefer it to be used for Nicole’s House for transgenders who are misplaced,” she said.

Houston wanted people to know that, although her daughter was living on her own, she was not alone. “She had a support system,” Houston said. “She came over to the house anytime. She had a safe haven.”