A school district’s discrimination becomes a gift to Youth First 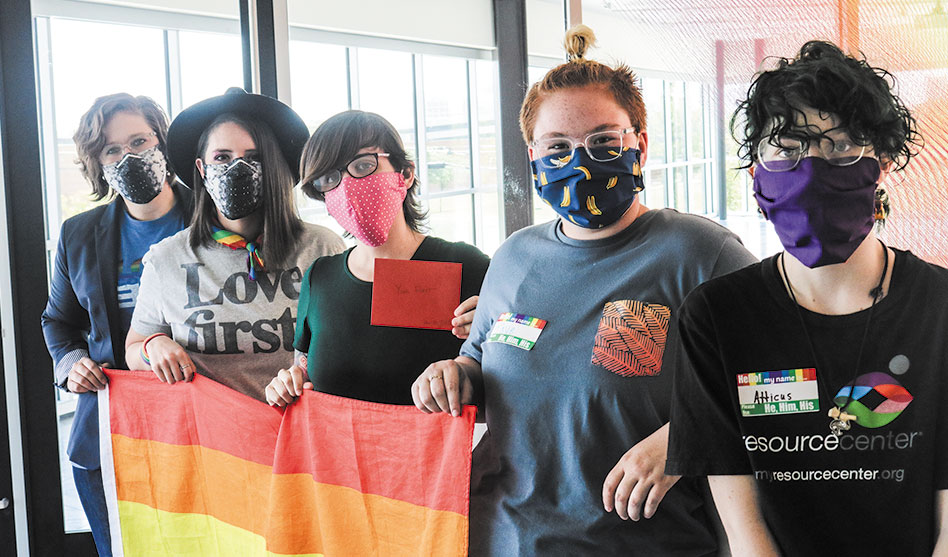 Pride parades may be canceled, but Stacy Bailey celebrates this year by donating to help young LGBTQ people and by marching for Black Lives Matter

After settling her discrimination lawsuit against Mansfield ISD, art teacher Stacy Bailey and her wife Julie Vazquez made a $10,000 donation to Youth First at Resource Center this week.

“I chose Youth First because it is important to me to support a local organization that gives a safe space to our youth,” Bailey said. “I experienced years of pain and self-hate.” And, she added, when she was growing up, there was nothing like Youth First available to her. 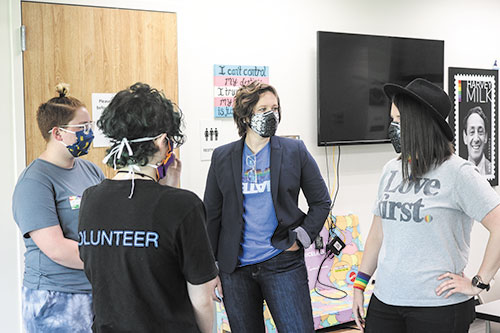 She said she wished there were more organizations like it throughout the suburbs and in rural areas.

Another reason Bailey made the donation was because she wanted to make sure people understood her lawsuit against the Mansfield school district was never about the money for her or her attorney. In fact, her Fort Worth-based employment attorney, Jason Smith, made a $10,000 donation to Human Rights Campaign from his portion of the settlement.

What their case was about, Bailey said, was discrimination.

At the start of the 2017 school year, Bailey introduced herself to her elementary school art students the same way other teachers throughout Mansfield ISD do — with pictures of her family. Among the photos was one of her with Vazquez, whom she called, “my future wife.”

The school received a complaint from a parent. Bailey, who had recently been named Mansfield Teacher of the Year for the second time, was removed from her classroom while the district initiated an investigation.

That investigation, she was told, would probably take about two days but could take up to two weeks.
Eight months later, she was still being investigated, but she had never been asked to come in and explain what happened.

Bailey spent much of her suspension volunteering at nursing facilities, playing dominoes with residents and entertaining them with bluegrass music she learned from her grandfather. But also during that period, she sent the school district an email, asking for its nondiscrimination policy to be updated to include sexual orientation and gender identity as Dallas, Fort Worth and other districts throughout the area have done.

In May, still on the payroll but out of her classroom, Bailey received a message that she would be moved from her elementary school to a high school. That’s when she hired Smith and sued MISD for unequal treatment:

Had a male teacher shown a picture of his wife, he wouldn’t have been placed under investigation. Assuming the male teacher had legally married, both his and Bailey’s marriages would have been equal under the law, and she called for equal treatment under the 14th Amendment to the U.S. Constitution.

Bailey went back to school in the fall of 2018 and, for the first time since she was in high school herself, found herself in a high school classroom. But as are all art teachers in Texas, she was licensed to teach K-12.
She adjusted to teaching older students. She even had a few students she had taught in elementary school in her high school class. And she became a co-sponsor of the school’s gay-straight alliance. While talking to students in the GSA, Bailey asked how many had ever met an adult member of the LGBTQ community. When she learned none had, she understood how important it was for her to be a great role model for them.

In November 2019, U.S. District Judge Sam Lindsay ruled in her favor, writing in a 40-page ruling, “There is no job-related justification for placing Bailey on an eight-month administrative leave and then not allowing her to return as an elementary school teacher.”

Lindsay explained that the decision to place Bailey on administrative leave for eight months was entirely based on her sexual orientation and found in her favor, citing the 14th Amendment.

In February this year, Bailey and MISD went to mediation to decide a settlement. The district agreed to remove the suspension from her record. They agreed to provide training for all counselors and administrators and open training to any interested teachers. They agreed to vote on a non-discrimination policy. And they agreed to a cash settlement.

Bailey also asked for an apology, but the district refused.

So far no training has been offered and no vote has been taken on a nondiscrimination policy. Bailey noted the settlement only requires a vote, not a change in policy. Schools have been closed since March because of the pandemic, but the school board has been meeting. The district said they are waiting for the U.S. Supreme Court to hand down an employment nondiscrimination ruling expected this month before its vote, which may require a vote to change its policy.

Bailey explained she decided to make her donation to Youth First in June to commemorate Pride month. She noted the U.S. Supreme Court’s marriage equality ruling and other SCOTUS decisions in favor of LGBTQ rights all were announced on June 26, and the Stonewall rebellion took place on June 28.

“June 2020 is going to be marked by the Black Lives Matter movement bringing change for people of color,” Bailey continued. “We stand with the protesters. I think the LGBT community at large should support them.”
She also said she is proud of students from her high school and neighboring Mansfield H.S. that organized a march.

“We were all overwhelmed,” Bailey said. “We expected 100.” Instead more than 2,000 people turned out to march in Mansfield. Among them were most of her Gay-Straight Alliance students.

“It was,” she said, “a beautiful thing to witness.”

Since schools shut down in March, Bailey has been in constant touch with her students. She’s even had contact with parents of her students, something she did regularly with her elementary school students but rarely does with her high schoolers.

The one group she hasn’t kept up with are her GSA students. Most aren’t out to their parents, and she worried about their safety as they sheltered in place. Seeing them at Mansfield’s Black Lives Matters march was gratifying, she said.

And after touring Youth First and meeting a few of the young people involved who were there to accept her donation, Bailey said she has been inspired to become active in that organization. Maybe she’ll use her skills as an art teacher to help. Maybe she will use her music.

But her first step, she said, is to just listen and see how she can help make the lives of young LGBT people better.