A new day, a new administration 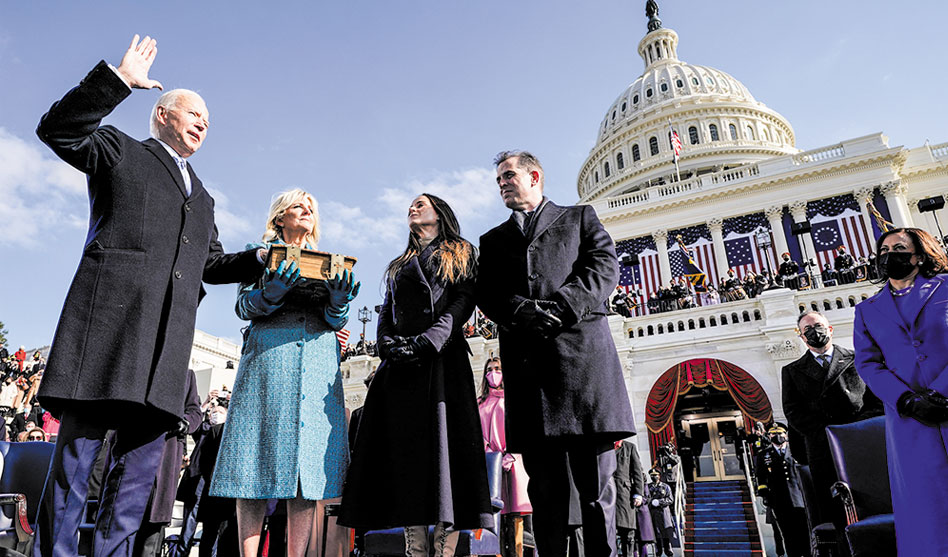 Joe Biden is sworn in as the 46th president of the United States by Chief Justice John Roberts as Jill Biden holds the Bible during the 59th Presidential Inauguration on Wednesday, Jan. 20, as their children Ashley and Hunter, and newly-inaugurated Vice President Kamala Harris, far right, watch. (AP Photo/Andrew Harnik, Pool)

Democrat Joe Biden was sworn in Wednesday, Jan. 20, as the next president of the United States, ushering in a much-improved political climate for LGBTQ people and, many might say, the nation.

In one of his first acts in office Wednesday, President Joe Biden signed several executive orders, including the order “Preventing and Combating Discrimination on the Basis of Gender Identity or Sexual Orientation.”

The Biden LGBT executive order “builds” on the U.S. Supreme Court’s decision last June that holds that Title VII of the federal Civil Rights Act protects employees from discrimination based on sexual orientation and gender identity. A press release on the President-Elect’s website before inauguration did not elaborate on what “build” means but said the executive order “will also direct agencies to take all lawful steps to make sure that federal anti-discrimination statutes that cover sex discrimination prohibit discrimination on the basis of sexual orientation and gender identity, protecting the rights of LGBTQ+ persons.”

Sharon McGowan, national legal director of Lambda Legal, said her organization is “thrilled” with the the executive order establishing the reach of Bostock. She noted that, as recently as of Sunday, the U.S. Department of Justice under Trump issued a memo, saying that DOJ’s Civil Rights Division would “continue to abide by … the multiple statutory and constitutional protections that may exempt religious employers and educational institutions from the rule announced in Bostock, or applications of Bostock’s reasoning to other statutes.”

For McGowan, “We thought it was important on Day One to recalibrate” the federal government’s interpretation of Bostock “and have a definitive statement that the Biden administration will fully implement Bostock.”

In addition to the executive order building onBostock, President Biden signed 16 other executive moves within hours of his inauguration, many of them directly reversing actions by Trump. Among those were orders stopping the U.S.’s withdrawal from the World Health Organization, rejoining the Paris Climate Accord, mandating the wearing of masks on federal property, cancelling the Keystone XL Pipeline and halting funding for Trump’s border wall and more.

Just prior to Biden’s swearing in Wednesday at noon, U.S. Supreme Court Justice Sonia Sotomayor administered the oath of office to now-Vice President Kamala Harris, the former U.S. senator from California and a strong and long-time supporter of LGBTQ equality. Her ascension marks the first time a woman has held one of the two highest positions in the U.S. government, and also the first time a person of color has held the position of vice president.

On Thursday, Jan. 21, a U.S. Senate committee took up Biden’s nomination of openly-gay Pete Buttigieg to serve as secretary of Transportation. His appointment marks the first time an openly LGBTQ person has been nominated to serve in a Cabinet position, although Trump in 2020 did appoint Richard Grennell as acting director of national intelligence, a Cabinet-level position.

Television coverage showed Buttigieg sitting with his husband Chasten on the inaugural platform. Both men were wearing what appeared to be KN95 masks underneath black cloth masks, a combination that helps mitigate the build up of moisture on cloth masks on cold days,

Biden had already announced another first on Jan. 19, appointing an openly-transgender person, Dr. Rachel Levine, to serve as assistant secretary of the Department of Health and Human Services. Levine, who has been serving as Pennsylvania’s health director, becomes the first out transgender person to be nominated for a position that requires U.S. Senate confirmation. According to the HHS website, the Office of the Assistant Secretary for Health, “oversees the Department’s key public health offices and programs, a number of Presidential and Secretarial advisory committees, 10 regional health offices across the nation, and the Office of the Surgeon General and the U.S. Public Health Service Commissioned Corps.”

Ruben Gonzales, executive director of LGBTQ Victory Institute, called Levine “one of the foremost experts on responding to this pandemic,” adding that the LGBTQ community is “united in standing with her for the confirmation fight ahead.”

The LGBTQ Victory Institute oversees a Presidential Appointments Initiative that puts forward LGBTQ candidates for positions throughout the administration.
One of the more bizarre moments of outgoing President Trump’s departure from Washington, D.C., came at a small 21-gun salute ceremony he staged for himself at Andrews Air Force Base before departing for his home in Florida prior to Biden’s inauguration.

According to a White House pool report, as Trump arrived, the sound speakers played openly gay performer Elton John’s “Love Lies Bleeding” (which includes the lyric, “Oh, it kills me to think of you with another man”).

As Trump finished his impromptu remarks to the small gathering and began walking to the plane, the speakers blared the Village People hit song, “YMCA,” often referred to as the “gay national anthem.” And as Air Force One lifted off the runway, the sound system was playing the last words of Frank Sinatra’s “I Did It My Way.”

Biden’s inaugural ceremony included Lady Gaga singing the National Anthem, followed by Jennifer Lopez singing a medley of “This Land is Your Land” and “America the Beautiful,” taking the chance in the middle of her performance to declare triumphantly in Spanish, “One nation, under God, indivisible with liberty and justice for all,” before also adding a sliver of her own hit, “Let’s Get Loud.”

A female fire department captain from South Fulton, Ga., delivered — and simultaneously signed for deaf observers — the Pledge of Allegiance. And a highlight of the day came when 23-year-old Amanda Gorman, the youngest inaugural poet ever, who recited her poem, “This Hill We Climb.”
In his inaugural address, Biden acknowledged the difficulty of the times — the coronavirus pandemic, loss of jobs and the rise of political extremism which we must confront and we will defeat.”

In addition to the loss of more than 400,000 lives and millions of jobs to COVID-19 over the last 12 months, the nation on Jan. 6 witnessed a riotous mob, incited by Trump, break into the U.S. Capitol, reportedly seeking to find and kill Vice President Mike Pence, House Speaker Nancy Pelosi and others Trump had identified as obstacles to his continuation in office.