‘A gay pleasant evening for all’ 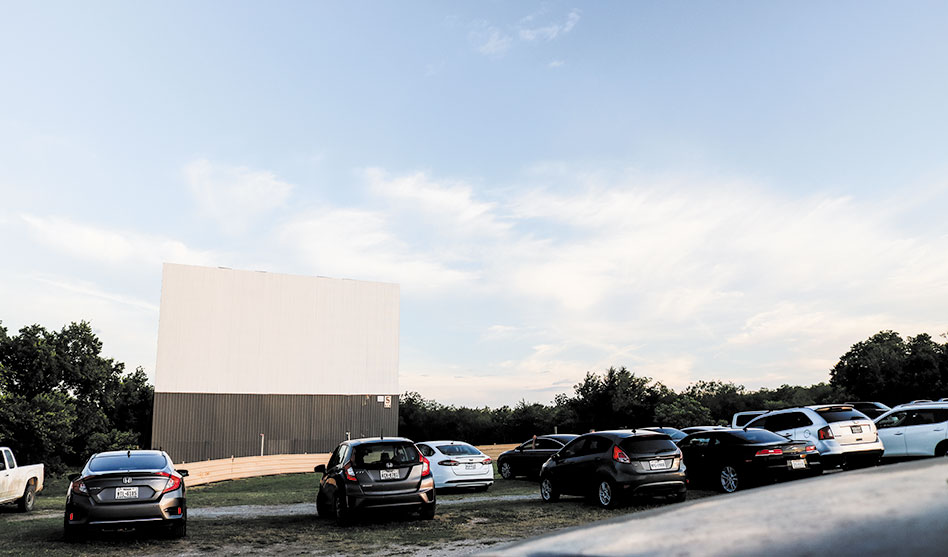 Beautiful Texas skies provide a backdrop for the start of a drive-in movie… though even rain clouds only add to the adventure of outdoor viewing. (Photo by Arnold Wayne Jones)

Go out, turn up, drive in… Texas-style

There’s a reason why Dallas, only the third largest city in Texas, has far-and-away the largest gay population. That’s because gays love what Big D has to offer: the shopping, the socializing, the culture.

All of which, of course, have been seriously curtailed during the Age of COVID. Neiman Marcus has filed for bankruptcy; DIFFA Dallas’ runway collection was replaced by an online fundraiser; Pride has gone “virtual;” theaters and museums have all been shuttered. 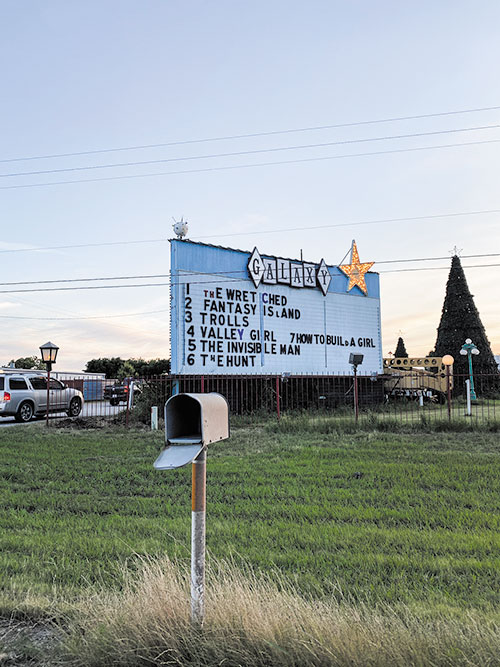 The entrance to the Galaxy in Ennis

But Dallas, while sui generis as an oasis of carpe diem excesses, is still firmly part of Texas, and all that image conjures. And Texans — gay and straight — embrace that identity of open spaces and quirky culture. So during a time when socializing opportunities are rare, and coming up with fresh ideas to occupy our time even rarer, who wouldn’t want to partake in an authentic Texas adventure?

And that would be the road trip… one with a healthy dose of kitsch.

Hence the Galaxy Drive In in Ennis, Texas.

With its requirement of wide-open spaces, clear skies and embrace of the outrageous entertainments, the drive-in is an avatar for the Texas personality. (Joe Bob Briggs, anyone?) The first licensed outdoor movie screen was in Comanche County in 1921.

Like cinemas B.C. — Before COVID — the Galaxy is a sprawling multiplex, only it’s all outdoors: Seven screens of various dimensions and lot sizes, allowing intimate movies or bigger, splashier ones. But let’s face it: With Hollywood shuttered like many industries, and with audio coming through your car’s audio system (you tune into each show on your radio), it’s not the best place for the IMAX and THX special effects extravaganzas which aren’t being distributed much right now anyway. But that has always been part of the fun of a drive-in movie.

Xavier Johnson joined in a recent gay outing to the Galaxy and saw the recent B-movie horror Fantasy Island. He offered this review: “It was fun. I mean, it was a D-list adaptation for sure, but entertaining.” In other words, perfect drive-in fare.
Joseph Love organized his own group outing after remembering a trip to the Galaxy about a year ago. “I really wanted to see [my friends] so this is what I could think of [as a way to] get everyone out of the house for a little bit — just leave the four walls and breathe!” he says.

About 10 people made the trip with him, spaced out in about four cars. They arrived early so they could park next to each other and “somewhat say hello. Then everyone said goodbye there [after the film], and we left. Honestly, it was a really good time.” 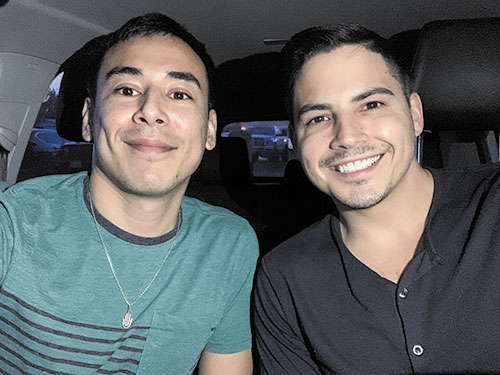 Zachariah and Shane Allen on their first movie date in months

Unlike Love, Shane Allen had never been to a drive-in theater before; his husband Zachariah had, though it has been years ago, so caravanning south of Downtown to social-distance share a common enterprise was a fresh experience for both.

“I fully enjoyed the experience and would do it again,” says Allen, who watched the acclaimed feminist horror film The Invisible Man. “This is something that can’t happen in Dallas proper — there’s not enough land and too much light pollution. And what better time to drive 40 minutes away to see a movie than when gas is cheap and there’s not much else to do that’s socially responsible once the sun goes down?” (That being said, Allen has become a convert beyond the limitations due to theater closures: “I’d totally do this once COVID is a memory and gas is high again.”)

They aren’t the only ones who liked it. The theater was bustling on a recent Friday night blessed by gorgeous weather at the campus about 35 miles down I-45 (exit 258). That’s not always the case, of course; another weekend, rainstorms swept through from the start of the film, but the premiere many viewers were gathered for — a locally-produced artsy sci-fi pic called The Vast of Night, set in the Southwest in the 1950s — seemed to add to the verisimilitude of the retro experience. 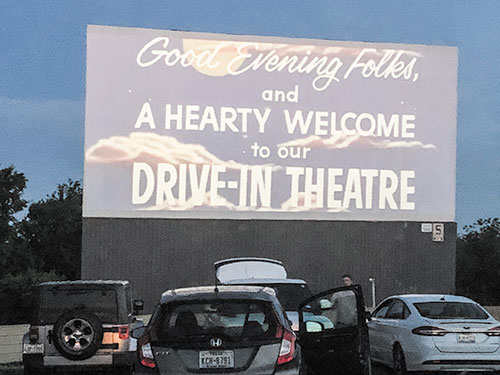 Management discourages exiting your vehicle, which isn’t a problem during a downpour, but occupants do tailgate before the movies with socially-distant socializing. The concession stand has been temporarily closed for months, so for the time being you can bring your own food and drinks in with you (though last week they experimented with selling drinks and popcorn).

Given that opportunity, why not make the opportunity into an essential Texas experience: On the way down, you can stop off a few exits early to pick up a Blizzard and patty melt on Texas toast at DQ, or be even more Texasy at the Sonic for a No. 1 and tots just a few exits past that (two drive-ins, one trip!). You can even overshoot the exit about five miles and stop into that most authentic of Lone Star experiences: The Buc-Ee’s nearest Downtown Dallas. 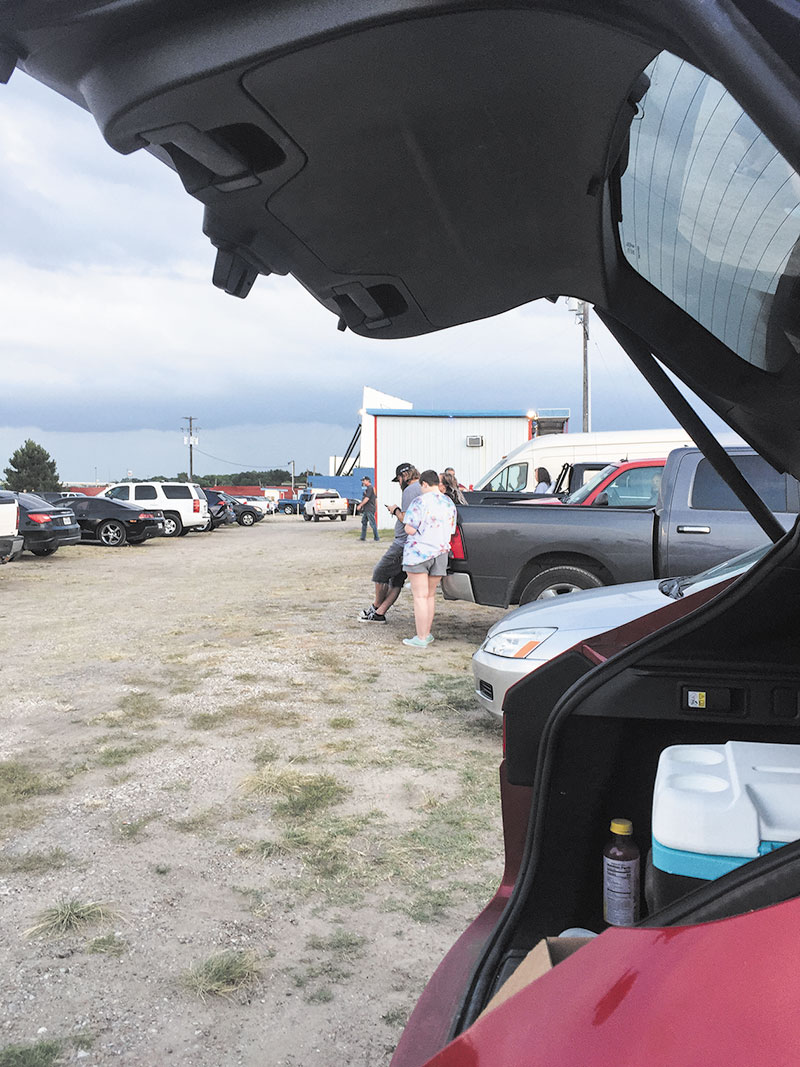 Tailgating before a screening.

Double features, a staple of the drive-in, are also on hold for now, but arrive early (showtimes are around 8:30 p.m., i.e., after sundown) and listen to the oldies playing on the radio stations before the audio kicks in; and enjoy the pre-show bumper reel — throwbacks to bygone eras with a campy sense of irony. How campy? When the narrator tells you movie night is “a gay pleasant evening for all,” you’ll know you’re where you should be.