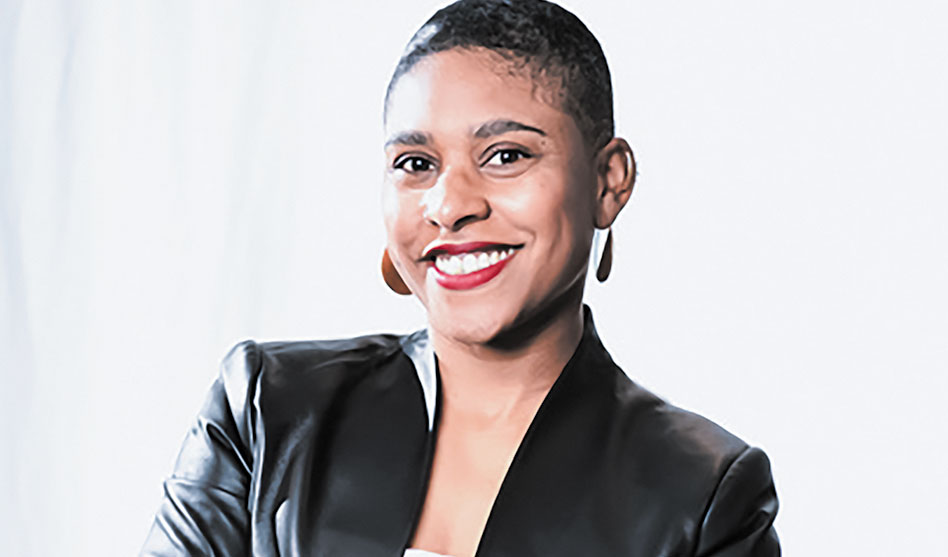 Kierra Johnson, executive director of the National LGBTQ Task Force, is also the mother of three. She spoke with me for Mother’s Day about her experiences as a parent in “a big, fat, queer, blended family,” her advice for other queer parents, and how being a parent has impacted her work.

Johnson has led the Task Force since February, having served as deputy executive director since 2018 and been on its board of directors and National Action Council before that. She came to the organization after 20 years in the reproductive rights movement.

If running a major LGBTQ organization doesn’t keep her busy enough, she’s also going to have “a high schooler, a middle schooler, and a preschooler” next year. She didn’t always want to be a mom, she said, explaining, “I wasn’t one of those people who was like, ‘When I grow up, I’m going to have 2.5 kids.’”

She was inspired to become a parent, however, “because I was in a relationship that made me feel love, and joy, and safe.”

As for being a queer parent, Johnson, who is bisexual, reflected, “I think there’s an increased amount of fear and caution that as queer parents we endure, especially as our kids are entering their own spheres without us.”

She recounted a time when one of her children wanted to wear nail polish to preschool. Her then-partner was afraid other kids would make fun of him. Everyone gets made fun of for something, though, Johnson felt, “whether it’s nail polish, or the fact that he’s Black, or that he’s got two queer moms and no dad.”

She told her partner that their child should go to school with painted nails, “and then we’re going to listen” and make another decision based on that. “What we’re not going to do is put this box around our kid because of our fears.”

Johnson observed, “I feel like my children are teaching me every day about how I need to think and be and do differently, and to not make assumptions,” not only about strangers, but also about themselves. “Sometimes I’m wrong,” she admitted. With one child, “I’ve been using he/him pronouns since they were born, and when my kid told me, ‘I feel like a little bit of a girl and a little bit of a boy,’ I was like, ‘Okay, I need to show up differently.’”

Yet she affirmed, “Because I’m so invested in supporting them every which way I can, I’m okay with being wrong.”

Parents “so desperately want to make the right decision for our children” and are often judged for their choices, Johnson said. But, “There are often many right answers, and those answers are going to look different family to family and kid to kid even. It’s important to give ourselves grace, give each other grace, and know that we’re not stuck in the decisions that we make.

“I’m not saying there aren’t consequences, [but] part of being a parent is about being nimble and willing to evolve,” she continued. “Parenting is a big, fat experiment, and there’s so much fun and joy in that. My advice is let yourself feel the joy as opposed to the anxiety of the decision making.”

“I take that into my work,” Johnson explained. “I’m going to be wrong sometimes.”

The question is then, she continued, “How do I evolve based on the experiences and relationships that I have in the world? I feel grateful that I have [my kids] as my teachers to help further my own thinking about what it means to create a world that is really about equity and justice.”

Creating that world is the Task Force’s mission. “I think one of our gifts to the movement is that we have never seen social justice issues as single constituent issues,” Johnson asserted, “so we have long worked across movements, across identities, to build community power to move liberation, equality, and justice for all people.”

The Task Force’s biggest campaign right now is around the Equality Act, which would expand federal civil rights for LGBTQ people. One of the ways they’re strategizing around this is by asking, “How does the Equality Act improve family lives?” Johnson said. She noted that despite the practical benefits of marriage equality for many, there are still “many ways that LGBTQ people are discriminated against that end up being barriers to us being able to provide for our families.”

The organization has also been raising awareness about the impact of the pending U.S. Supreme Court decision in Fulton v. City of Philadelphia, which could let taxpayer-funded adoption and foster care agencies around the country use their religious beliefs as a reason to discriminate against LGBTQ people and others. A loss in the case “means kids who don’t get a family,” Johnson said.

This is personal for her, too: “One of my own family members almost was sent to foster care until my mom was able to take him in,” Johnson shared. She is hopeful, however, for a win in Fulton and a continued evolution “of hearts and minds and policy that is supportive of queer people and the families and communities they are part of.”

And families don’t just benefit from equality; they are key to achieving it. Johnson explained, “I think one of the reasons that we’ve come so far is because of our families.”

LGBTQ people are working “hand in hand with grandparents, aunties, nieces, nephews, best friends, and the other students in our classes that show up for us together.

Frankly, I think it’s why we’re going to ultimately see the passing of broader federal protections and increased support of LGBTQ people and in society.

“We have come a long way and because of that I’m inspired that we can do better and do more,” she said. “There’s no limit to showing up as our best selves. There’s no cap on love.” .Dana Rudolph is the founder and publisher of Mombian (mombian.com), a GLAAD Media Award-winning blog and resource directory, with a searchable database of 600+ LGBTQ family books, media, and more.