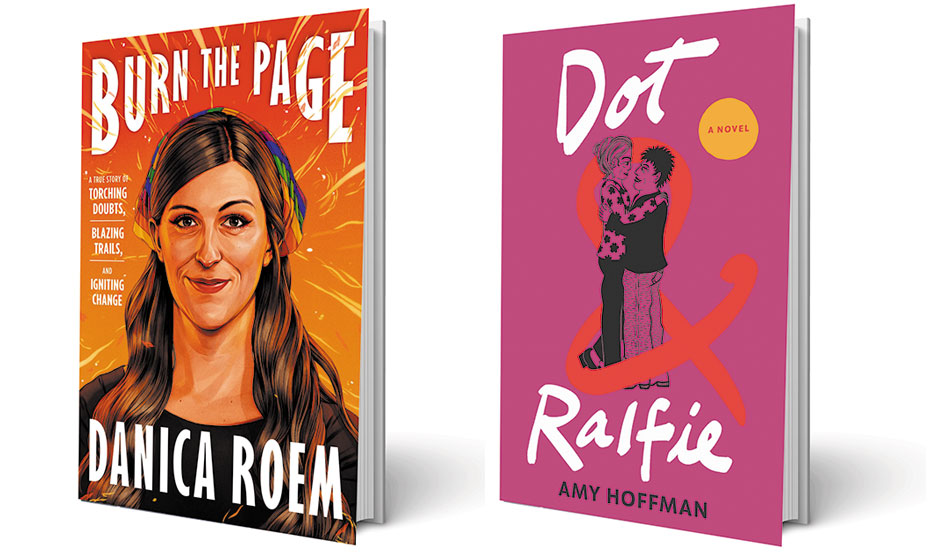 Sometimes the smallest things make you hot under the collar. It doesn’t take much: an idiot on the road, a disrespectful eye-roll, something muttered under someone’s breath — and that’s it; you’re torched.
Sometimes, conversely, the smallest things can change your bad mood. In Burn the Page by Danica Roem, it was an email.

It seemed like Danica Roem was always crying. To be fair, she had good reason: She was working two jobs, and they weren’t enough to pay the bills. Her car was a piece of junk; it was 2016, and her states’ Republican delegates had just filed several anti-LGBTQ bills.

For a trans woman like Roem, tears were perfectly appropriate — until someone emailed her, asking why she didn’t run for office herself.

So, in preparation, Roem hired a team to do “opposition research” to suss out any past behavior that her homophobic opponent might try to use against her.

Born in the fall of 1984, Roem was three years old when her father committed suicide in their back yard. Soon after, her mother’s parents needed care and moved into the Roem household. This, Roem admits, was stressful all around.

Even in fifth grade, Roem knew that she wasn’t a “cis-het straight kid,” but since she had no “positive representation of LGBTQ people,” she stayed closeted. By 13, she knew she was trans but didn’t want anybody else to know. To help hide it, she participated in sports, fell in love with baseball and heavy metal music and admired girls, albeit in ways different than did her male peers.

Eventually, she made a community for herself.

But when she began to think about maybe having a relationship, Roem soon realized that she had some work to do. She couldn’t expect someone to see her for herself until she did it first.

“I had to commit to being who I was…” she said. “It was time to transition.”

If you ever need proof of the concept that little things make big differences, you’ll want Burn the Page. Same goes if you want to read a memoir that bounces with energy.

Indeed, this book is a bit like taking a small kid into a toy store: They run amok, touching and examining everything. That’s not unappealing; author Danica Roem careens about, but she always lands on the heart of this book — being honest, open and authentic — which is likewise what she encourages readers to do.
Her passion for this is contagious, and she sweeps readers along with her enthusiasm on other aspects of her life, whether it’s heavy metal music, travel or politics. Be aware that, because of her excitement over her career and her heavy coverage of it, the latter might slam shut the eyelids of readers who are not politically-minded.

On that, this book is like no other political memoir, ever. It’s fun, wildly entertaining, and it aims to mean more than just one woman’s story. For readers who want a good activist tale with a smile, Burn the Page is on fire.

There is one alternative to growing older. Never mind; though, it’s not on your radar. You’re more focused these days on not groaning when you get up each morning, and keeping your joints oiled enough to work. Years don’t really mean much when you’ve got places to go and people to see before that alternative happens.

But in the new novel Dot & Ralfie by Amy Hoffman, keep one eye on that calendar ….

Neither Dot nor Ralfie could agree on how they met, except that it was back when good lesbian bars still existed, before the internet. Dot recalled, but Ralfie denied, that they met over a pool game, and Ralfie wandered away. They both remember a cocktail party when Ralfie first took Dot home with her.

These days, though, “home” is a third-floor walk-up in a Boston neighborhood. It’s been a great place, and Dot and Ralfie like the neighbors and all. But Dot’s 68, and Ralfie’s over 70, and three floors of steps are a problem — big problem. Especially when you’ve had knee surgery like Ralfie’s had. Especially when you’ve had a teensy little heart attack and walking makes you winded, as it does Dot.

And so Dot’s sister, Susan, has been pushing Dot and Ralfie to move to a senior living complex, which Ralfie refers to as Maple Grave because that’s what’s next, isn’t it? Yeah, and Susan is so determined to have Ralfie and Dot move into senior housing that she buys a way-off-the-beaten-path Maple Grave apartment of her own, for her and her lover, Germaine.

But Germaine’s not happy. She’s more than a decade younger than Susan, and, besides, she’d miss her friends back in the city, just as Ralfie would miss the guys at her job at the DPW, and Dot would miss the kids at the school library where she worked. And it would be such a hassle for Dot to see the older librarian that she had a little affair with not long ago. Viola was ailing, and needed Dot’s help.
Still, those stairs. What was the next step?

The meme is correct: Old Age Ain’t for Sissies. But what are ya gonna do about it? You’re gonna read Dot & Ralfie, that’s what.

That’s because this is an adorable book. It’s funny in all the right parts, good-naturedly grumpy where it needs to be, and wonderfully, wryly sarcastic. But author Amy Hoffman also nudges her readers to think about their own futures and what each might entail. Who will care for us when we only have similarly-aged friends to rely on?

To soften the soberness of that question, Hoffman gives readers a handful of very charming characters that fuss at one another, argue, make up, scheme and fuss some more. It’s a little like a lesbian Honeymooners episode, only much sweeter and better.

There aren’t a lot of novels specific to lesbian seniors who want something reflective of their lives, so seek out Dot & Ralfie. If you’re tired of the usual literature, it’s the perfect alternative.