‘You need to fight’ 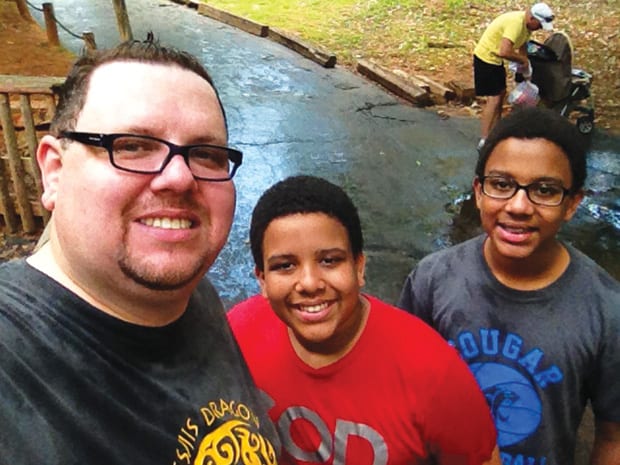 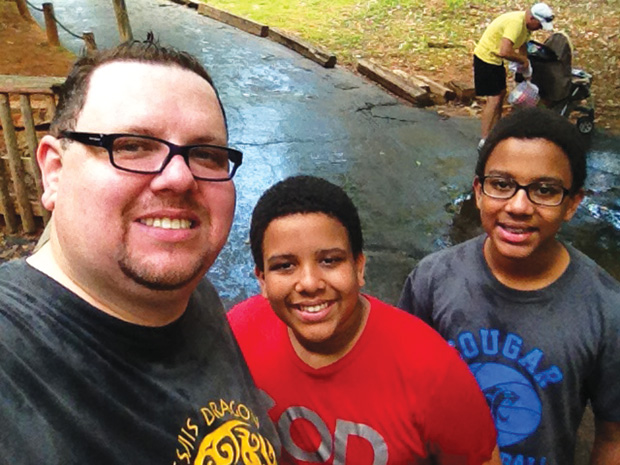 FATHER KNOWS BEST | When Scott Morrison’s ex-wife accused him of being a pedophile and tried to cut him off from his two sons, he fought back — and won. Now he encourages other LGBT parents to do the same. (Photo courtesy of Scott Morrison)

TYLER — After 14 years of marriage and two kids, Scott Morrison found himself fighting to see his sons.

Following a divorce in 2009, Morrison came out to his sons, now 12 and 14, and his ex-wife started to turn the boys against him. Morrison said she accused him of being a pedophile and took him back to court last year to get full custody.

“After I came out, my ex-wife started a campaign to humiliate me and try to hinder my relationship with my kids,” Morrison said.

He hired an attorney and went to the court in conservative East Texas prepared for a fight. After psychological evaluations and several months in court, the case was settled in May, with a judge naming Morrison’s ex-wife the custodial parent and keeping the visitation schedule — the same arrangement that was decided during their divorce.

“I basically spent $9,000 to keep things the same, but she didn’t win and that was the main point,” Morrison said.

Dallas attorney John McCall Jr., who represented Morrison, said he sees cases like this all too often when straight exes become angry that their marriages end because their spouses are gay.

McCall said it’s still common for gay parents to have their sexuality used against them by an ex-spouse, but “unless there’s a legitimate legal issue, it doesn’t hold up in court.” He said as long as LGBT parents can prove they’ve been good parents and care about their children’s welfare, the courts are on their side.

That wasn’t the case a few years ago. McCall said there’s been a shift in the last three years where judges evaluate gay parents on how they care for their children, instead of basing decisions on their sexuality.

McCall said he represented a lesbian mother five years ago in Tyler and her outcome wasn’t as good as Morrison’s — an example of how a few years has changed mindsets.

McCall said in more conservative areas like Hunt County the “super-right religious mindset” of the judges will change when new judges are elected.

“No matter the county, a judge that’s been in office five years or longer is in the old mindset,” he said.

But he said parents should still challenge the claims that they aren’t a good parent because they came out, no matter where they live in Texas.

“It’s always in the child’s best interest to be with the parent,” McCall said. “A gay parent is still a good parent.”

Unfazed by conservative venue
Morrison and his ex-wife met at Christ for the Nations in Dallas and later settled down in Tyler. The couple started a nonprofit ministry in Uganda and lived there for seven years.

Despite knowing he was gay and coming out to himself in 2006, Morrison said he stayed in the marriage because he loved what he did in the ministry. He had already told his ex-wife before they married that he’d struggled with homosexual attraction. She encouraged him that it would go away.

But he said things changed in 2008 when his wife had an affair with a staff member in their ministry and became pregnant with the other man’s child. They decided to divorce, and his ex-wife was granted primary custody of their sons.

Morrison moved to Oklahoma to start fresh, but continued to visit his sons and have them come stay with him. As the months passed, he said his ex-wife told their sons bad things about gay people and told them to be careful around Morrison and his friends because they were pedophiles. He said she often threatened to take the kid back to Uganda so he couldn’t see them.

That led to her filing a custody modification last year, citing his sexual orientation and saying he was a pedophile and had abused the kids.

Despite having to fight in a conservative Tyler court, Morrison said he didn’t back down because his kids mean the world to him and he refused to let his ex-wife keep them from him because he’s gay.

“I easily could’ve walked away,” he said. “That wasn’t the right decision to make. You need to stand up for your kids. You need to fight.”

Lesbian mom keeps up hope
Leigh Ann Scott also decided to fight. After she came out to her husband last year, he served her with divorce papers. She said her ex-husband told her she’d never see their 3-year-old son again because she was a sexual deviant and had committed moral sins.

Facing a conservative court system in Greenville in Hunt County, where one of her ex’s lawyers was his father, she worried she would lose her son forever. She said if she’d never told her ex that she’d fallen in love with a woman, the custody wouldn’t have become an issue during the divorce.

“I think it played a huge role in the custody,” she said. “It was very clear that this was about sexual preference.”

Scott and her ex-husband completed mediation in April and didn’t have to take the custody fight to trial. Her ex-husband was granted primary custody and she is allowed to see her son every other weekend. She said she settled for the arrangement because that deal was the best outcome, even with a trial.

But her fight to see her son more often is far from over. The custody arrangement has to remain in place for a year until she can contest it, which she plans to do next April.

“I’m in it for the long haul,” she said, tearing up. “It’s just hard. I went from being a full-time mother to losing him and just seeing him every other weekend.”

Scott said she hopes the coming months show her ex that her being around their son has been a good thing and he will agree to joint custody next year. 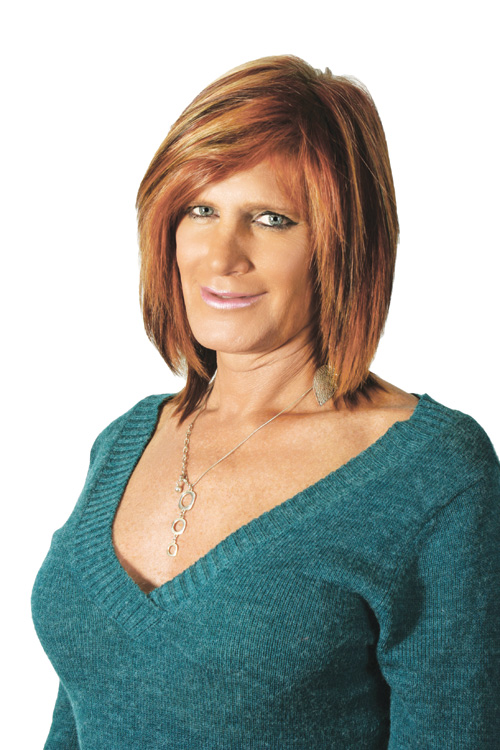 TRANS-PARENT | Jessica Lynn’s ex-wife doesn’t want their son to know his father is now a woman.

“It’s not over as far as I’m concerned,” she said.

Trans woman ‘lost everything’
Not every LGBT parent wins their custody case when their ex targets them for being LGBT.

Transgender woman Jessica Lynn hasn’t seen her son since 2009, when she transitioned after her ex-wife moved to Plano to be near family. But when Lynn wanted to see her son last year, her ex filed to take away her parental rights because she didn’t want their son to know his father was now a woman.

Lynn hired an attorney last September when the battle began. She’d previously been granted primary custody of the couple’s three boys, now 13, 19 and 21, in 2007 after a four-year custody battle in California, but they shared responsibility raising them.

Despite her ex having been supportive of her transition, Lynn said that changed when she wanted to see her son after she had gender reassignment surgery.

Late last year, Lynn was evaluated by a psychologist, who ended up recommending she see her son. During a meeting with both parties’ attorneys in February, her ex said she didn’t like what the psychologist had recommended and wanted to take the case to trial.

But Lynn, who’d spent $25,000 in court and attorney fees, couldn’t handle the financial burden of a trial, and ended up requesting a final hearing in late June where she represented herself.

Collin County Judge Scott Becker ruled in favor of Lynn’s ex-wife, terminating her parental rights on the grounds of abandonment, lack of child support and for being a danger to her child.

“I lost everything,” she said.

Lynn has 30 days to appeal the decision, but she must decide soon if she will move forward.

“I don’t know what to do,” she said. “I am kind of dumbfounded about what to do next.”

If she doesn’t appeal, she will have to wait another five years to see her son when he turns 18, a hard choice she wouldn’t have had to make if she hadn’t transitioned.

“All of this has happened because I had a sex change,” she said.

McCall, who originally represented Lynn, said transgender custody cases are “extremely rare” because many parents can’t afford to transition if they are paying child support or have expensive legal fees before a transition. In Lynn’s case, he said she was never ordered to pay child support, so her circumstances were different.

Still, he said courts are “just pushing the envelope” on trans issues because the cases are so uncommon, but time and more cases will help trans parents in their custody battles.

‘There’s no reason to let them win’
While LGBT people often fight their straight exes to see their children, Morrison said many parents give up because they don’t think they will win.

But with mindsets changing in the courts and as more LGBT people come out and leave heterosexual marriages, he hopes that will eventually become a thing of the past.

“There’s no reason to let them win. People give up and they walk away,” he said. “I think as more of us come out, people will realize that we’re here.”

This article appeared in the Dallas Voice print edition July 26, 2013.