Winging her way to success 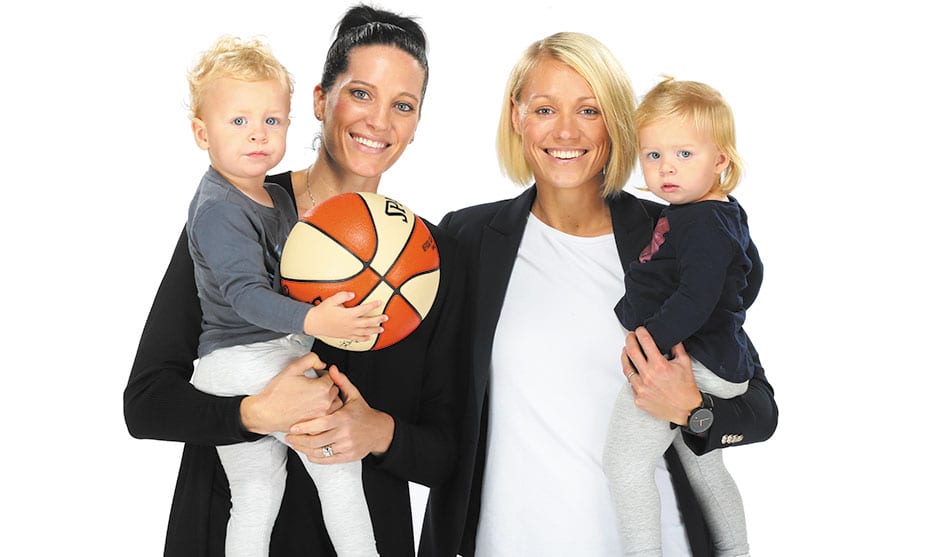 The goal of each and every team in the WNBA is winning the championship, and Dallas Wings Assistant Coach Erin Phillips said her team is no different.

After Tuesday night’s last-minute loss to the Phoenix Mercury, the Wings are in 7th place out of the 12 WNBA teams, with a 4-4 regular season record. But with 26 games still to go in the 34-game season are just now finding their groove, Assistant Coach Erin Phillips said this week.

“Every year, you have to continually improve. Players come and go, so it always takes a few games each year to find your stride as a team,” Phillips said. “We’ve kept our core group, and we’ve added some nice rookies. And now we’ve got [6-foot, 9-inch Liz] Cambage,” the Australian pro player who returned to the WNBA this year. 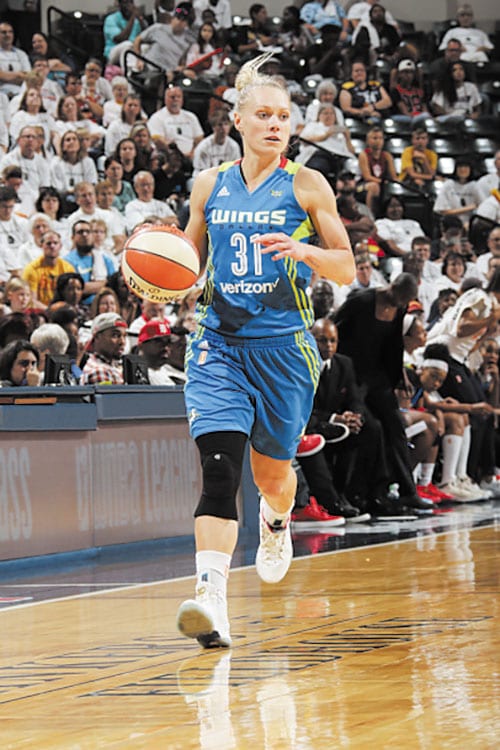 Erin Phillips in 2016, her last year as a WNBA player.

This is Phillips’ first year as assistant coach for the Dallas Wings, but not her first year as a member of the Wings family. She was traded to Dallas from the Los Angeles Sparks in March 2017, then waived by the Wings in May 2017.

Phillips announced her retirement as a player in the WNBA on Mother’s Day, saying she wanted more time to spend with her wife, Tracy Gahan, and their young twins. But just a week later, the Wings announced that they were bringing Phillips on as director of player and franchise development, and this season, “I was promoted to assistant coach,” she said.

Phillips said that Taj McWilliams Franklin, the other assistant coach, tends to focus more or less on the team’s post players, since she played that position, while Phillips tends to focus on the guards, which was the position she played. “But really, we all focus on the team overall,” she continued. “[Head Coach] Fred [Williams], Taj and myself, we work really well together as a team.

Phillips brought a long list of accomplishments with her when she came to Dallas. In 2004, while playing in the under-20 national championships with the Australian Institute of Sports, she won the Bob Staunton Award. And in 2005, while she was with the Adelaide Lightning, Phillips was named to the WNBL’s All-Star Five.

Phillips first started playing in the WNBA in the U.S. in 2006, winning two championships — in 2012 with the Indiana Fever and in 2014 with the Phoenix Mercury — before retiring as a WNBA player. And beginning in 2008, during the WNBA off season months, she played overseas, first for Israel and then for different teams in Poland.

Her father, Greg, played professionally with the Port Adelaide and Collingwood teams, which meant “it was the sport I grew up with,” Phillips said. “I played until I was 13. The boys I played with were my closest friends.”

But that came to a screeching halt when she turned 13. “They did have a women’s senior league, but there just was no pathway [to professional football] for girls past 13 at the time. So my father purposely introduced me then to basketball.

“I mean, there was netball,” a sport that used to be called “women’s basketball” but that is distinctly different from basketball played by women as we know it, Phillips continued. “My sister played netball. But netball is played in skirts, and there was no way I was going to play in a skirt. So basketball was the best thing for me. I enjoyed basketball, but my passion, really, was football. It always has been.”

Phillips had the chance to rediscover her passion when, in December 2015, she was signed as the inaugural AFL Women’s captain for the Port Adelaide Football Club, with the provision that the club was licensed for the 2017 AFL Women’s season. A few months later, though, Port Adelaide decided not to bid on a license for 2017.

But in September 2016, Adelaide Football Crew signed Phillips as a rookie, and the following January the team announced that Phillips and Chelsea Randall would be the club’s inaugural co-captains.

Phillips quickly proved that Adelaide had made a good decision in signing her. In the AFL Women’s debut competitions, she kicked the goal of the year in round three and turned in a “best on ground” game against Brisbane in the AFLW Grand Final. She was named vice captain of the All-Australian team, and she won the AFLW Best and Fairest award and the AFLW Players Association MVP Award.

In May 2017, Adelaide signed Phillips as a marquee player for 2018. She said this week she will be heading back to Australia in November for the AFLW pre-season and will start the season with Adelaide next January.

Australian Rules Football, for those not familiar with the sport, is a full-contact game that is kind of a cross between American football, soccer and rugby (with maybe some deadly martial arts thrown in here and there for good measure). When she had the chance to play in the AFLW,

Phillips said, she did have some concern about how the Dallas Wings management would feel about her spending the WNBA off season playing such a dangerous sport. She was, she said, very glad when they agreed to it.

But on a purely personal level, Phillips said, the risk of injury was never really an issue.

“For me, personally, there are things you just cannot worry about in life. I just don’t think you can’t NOT do something just because you are afraid of getting hurt,” she said. “I have always been willing to try new things, and I’ve always taken risks. I’ve found that if you go into something thinking you might get hurt, you generally end up getting hurt. So I don’t think about it.”

Family
The other — and probably the biggest — passion in Phillips’ life is her family — her wife, Tracy Gahan, and their 19-month-old twins, Blake and Brooklyn.

Gahan, who is just a couple of months shy of five years older than Phillips, grew up in McKinney, Texas and played college basketball at Iowa State. She was drafted by the WNBA’s New York in Liberty in 2002, but after being released by the team, went back to school for another year.

In 2003, Gahan headed to Greece to begin her pro basketball career. After two seasons with two different teams there, she went to Ireland for the 2005 season. In 2007 she played the last part of the season in Turkey, and from 2009-2010, she played in Poland.

In 2006, Gahan began her career with the WNBL in Australia, playing for the Adelaide Lightning. She spent four seasons with the Lightning, from 2006-2009, and then played for the Dandenong Randers from 2010-11.

Gahan met Phillips when she started playing for the Lightning, and the two became a couple in 2007. They were married four years ago.

“The long-distance relationship thing was really tough,” Phillips said. “It’s always challenging for athletes to maintain a relationship when you’re always traveling, especially when you’re in different countries for long stretches of time. There were times during the last 11 years that we weren’t always together, but at the same time, we were always kind of together.”

By the end of the 2011, which she spent with the Dandenong Rangers, Gahan was “really ready to retire,” Phillips said. “We were both ready for the long-distance relationship to stop. And she usually traveled with me during my last three years as a player.”

Today, travel is still a big part of the couple’s lives. Phillips said they spend about seven months out of the year here in North Texas — Gahan’s parents still live in McKinney — and the other five in Australia. But now, they travel together, along with their twins, of course.

Phillips’ face lights up as she talks about her children, who are, she said, “polar opposites. Our daughter is very sassy and social. She’s definitely got a bit of grit in her. Our son — he’s ginormous! He’s very curious and very sweet. He has curly, curly hair and is huge, and she’s average height with dead straight hair. They are really funny little people.”

Phillips said she loves animals — “I would rescue them all if I could” — but since she and Gahan and the children travel so much between the U.S. and Australia, they have decided to leave their Yorkshire terrier, Howie, to live with Gahan’s parents. “I like to say we have joint custody of Howie with my in-laws,” she laughed.

She also said that she is a “total vegan, not a ‘vegan-but-I-might-eat-fish-on-Saturday’ vegan,” for both health and ethical reasons. And she’s also a huge Dallas Cowboys fan.

“I love the Cowboys,” Phillips said, “and I was very, very said to see Jason Witten leave. I am still in mourning.”

Even though Phillips didn’t join the Dallas Wings organization until the 2016 season, she said she and Gahan have owned a home in North Texas for about six years, since Gahan’s parents are here. She said this is a great place to live, and the Wings are a great team to work for.

“The people here are wonderful, especially the LGBT community. This is a great place to be, and the Wings are a great team to be around,” she said. “This community has embraced [the team], and we love this community. We embrace everybody.

“We have so much fun as a team. Every time somebody comes to a game for the first time, they leave absolutely loving it. All it takes is for them to come to one game and they are hooked on us,” Phillips continued. “We are a very open and very welcoming team. This is a young team that loves playing basketball and competing in front of a crowd.

“We have a very awesome, very diverse crowd. We have a lot of LGBT supporters and we love that. We have so many fans, who are so passionate about our team; they love us and we love them. The fans have really embraced us coming here, and we absolutely value that support.”