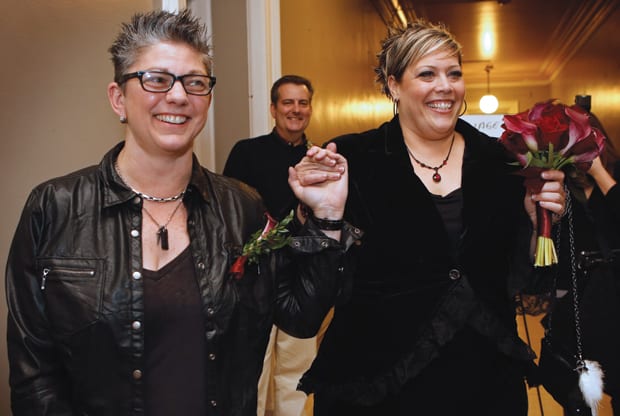 Gays get hitched for the holidays in Maryland and Maine; legislatures in Illinois, Minnesota and Rhode Island are next in line to take up issue 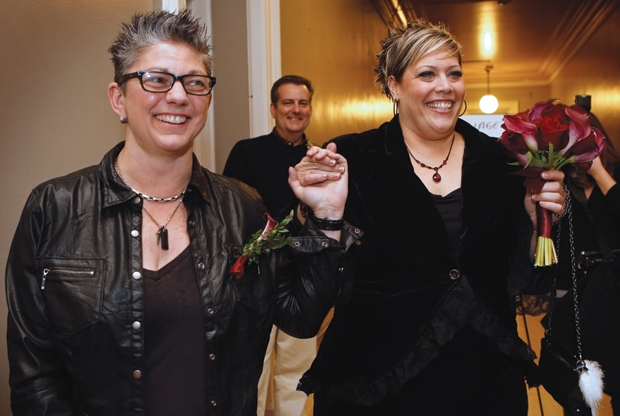 Same-sex couples began saying “I do,” this week in Maine and Maryland, while state legislators in Illinois, Rhode Island and Minnesota continued to push marriage equality measures in their states.

Maine couples joined newlyweds in Washington state, who began marrying Dec. 9, and lined up at city halls to get hitched across their state Saturday, Dec. 29, when the law went into effect. Voters approved ballot measures allowing same-sex marriage in November in Washington, Maine and Maryland.

Maryland’s law was the last to go into effect but perhaps the most exciting as couples lined up at midnight on New Year’s Eve to ring in the new year as happily married.

Nine states and the District of Columbia now allow same-sex couples to marry, but 2013 may bring marriage equality to at least three more states.

In Illinois this week, the race was against the clock to pass the Religious Freedom and Marriage Fairness Act in both the state House and Senate before new legislators are sworn in Jan. 9.

Illinois Senators were scheduled to hear the bill in committee Wednesday, Jan. 2, but failed to secure enough votes to waive a required 24-hour rule on posting the bill. An amendment was then added to an unrelated bill to push marriage equality through faster.

Senators will be have to be called back for a special session Jan. 8 in order to vote on marriage equality.

The House will convene Sunday and Monday, Jan. 6-7, but it remains unclear if legislators will vote on the marriage equality bill or the one with the marriage amendment.

If lawmakers do not approve the marriage equality bill, LGBT advocates will work with the new Legislature, which will have a Democrat supermajority.

“Civil laws that establish ‘same-sex marriage’ create a legal fiction,” George wrote. “The State has no power to create something that nature itself tells us is impossible.”

George went on to explain in the letter that the church is not anti-gay, but welcomes gay members and encourages them to live chaste lives.

“People live out their sexual identity in different ways, but the Church offers the means to live chastely in all circumstances, as the love of God both obliges and makes possible,” the letter states.

Openly gay state Rep. Kelly Cassidy spoke about the importance of marriage equality for her and her family, as well as her constituents.

“I do this not just as a legislator but a mom of three kids,” Cassidy said. “I want the world to be better for them. I want them to know our family is like any other in this state. And they want that, too.”

The Rhode Island Legislature is also moving ahead on marriage equality. House Speaker Gordon Fox has called on legislators to vote on the bill by the end of the month.

Minnesota is likely to follow shortly after. After the failure of a November ballot measure that would have banned same-sex marriage in Minnesota, gay state Sen. Scott Dibble, D-Minneapolis, announced this week that he would take the lead on a marriage equality bill in the upcoming session. He said LGBT advocates want a vote this year, so he’ll focus on the economy and jobs, planning to file a marriage equality bill in a few months.

Marriage equality in Hawaii will be determined by how the U.S. Supreme Court rules in California’s Proposition 8 case, challenging the state’s constitutional ban on same-sex marriage. The Jackson v. Abercrombie case challenged the state’s law allowing civil unions but not same-sex marriage.

A district court judge ruled the laws were constitutional in August but the couple appealed.

The 9th Circuit Court of Appeals granted a request filed by anti-gay Hawaii Family Forum to stay the appeal pending the Supreme Court’s decision in the Prop 8 case.

This article appeared in the Dallas Voice print edition January 4, 2013.