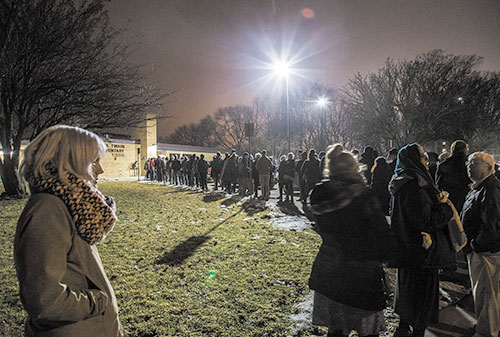 In the middle of a pandemic, Trump is literally destroying the post office right before our eyes because he doesn’t want people to be able to safely vote by mail. He’d rather people go to the polls … .

Wait a minute! What am I saying? Republicans don’t want people to vote! High voter turnout is good for Democrats.

Regardless, the Republicans think nothing of driving people out into a public space when there is still a deadly virus ripping through the country.

To be clear, Trump and his wife have applied for absentee ballots so that they can vote by mail in the November election.

I love the post office. Maybe because I was born a couple decades before the internet boom. Maybe because I met my wife in 1997, right before she left for 11 months to study in Japan. Getting letters and postcards from her made my life. And I sent many to her as well.

Republicans have long been after the post office, wanting to privatize it because — as far as the GOP sees it — if it doesn’t make a profit, then what’s the point? This also helps to explain why they hate public schools and would like to see the system taken over by for-profit corporations who have to answer to shareholders, not parents and students.

But Republicans have never been so brazen in their attempt to steal an election before. Trump is 100 percent not interested in running a campaign and competing on his merits — because he has no merits. He’s a trash human whose resume boasts racism and rape. It’s astounding to me that anyone still supports him, but they do.

While phone banking for the state house race I’m working on, I talk to a good number of people. Most do not want to talk to me. Frankly, a lot of people are rude. Some holler, “Put me on the ‘do not call list’!” and hang up the phone, as if they think that I have access to some grand master list I can delete their name from.

But nothing makes me more disheartened than when I talk to someone who says, “I’m not interested in politics.” It is often younger, presumably white men, who say such things. And my first instinct is to yell, “MUST BE NICE!” into the phone.
It’s a luxury to not care about politics. Or, I should say, it’s a luxury to not have to think of the policies that other people are making for you because you are not the one who will be harmed by such policies.

I’ve been an out lesbian my entire adult life. There has never been a single day when I didn’t have to think about how policy affected my life. There were literally laws against me loving another person.

So yeah, I take it personally when a registered voter tells me they don’t care about voting.

That is especially true now! Trump has literally been the worst president. He is a terrible person who has spent his entire life harming other people. And since he took office, his ability to hurt people has become seemingly limitless.

We’re in the neighborhood of 170,000 deaths from COVID-19, certainly more by the time you are reading this. I remember reading a dire prediction that we would have 200,000 people dead by the November election. And we’re on track to even surpass that.

This is why Trump is throwing tantrums so hard right now. He has shown us who he is over and over again. And, sadly, his words and actions have become normalized in this country. But he isn’t normal. This isn’t normal.

If you’re planning on voting by mail, get your shit together. Make a plan. Know your state’s election laws. In Michigan, I advise that you get your application for a ballot in early. Take your completed ballot to your clerk’s office yourself. Put a mask on and drop it off.

On Twitter I keep seeing posts like, “Retweet if you would crawl naked over broken glass and rusty nails to vote Trump out in November.” The way things are going, that’s not far-fetched. And that’s not normal.