We have a caucus 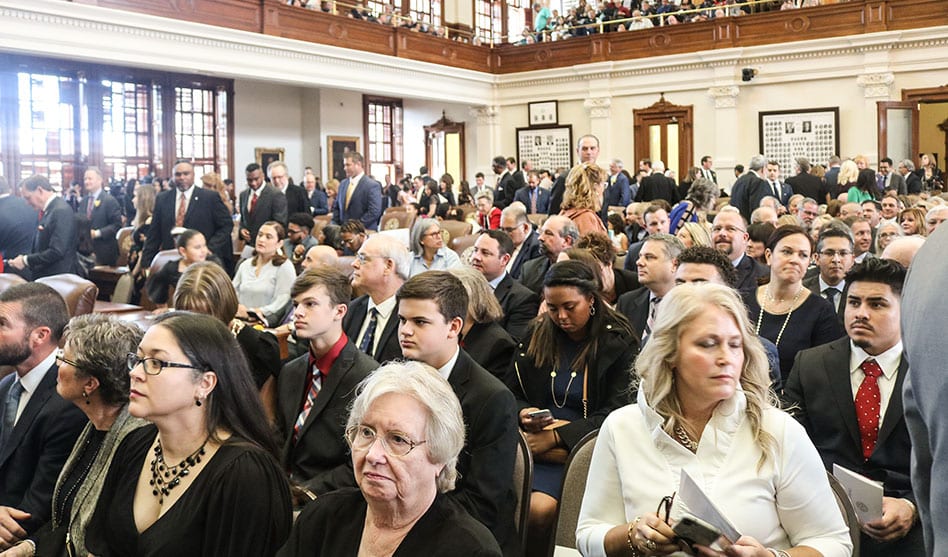 The crowded floor of the House of Representatives on Swearing in Day. (David Taffet/Dallas Voice)

For the first time in Texas history, the state legislature will have an LGBT Caucus. State Rep. Mary Gonzalez, a four-term representative who identifies as pansexual and is the dean of the delegation, filed paperwork to create the caucus.

When the Legislature convened on Tuesday, Jan. 8, four additional LGBT women were sworn into office. Rep. Celia Israel begins her third full term representing District 50. She was first elected in a 2014 special election to fill the vacancy created when Rep. Mark Strama resigned to become the head of Google Fiber in Austin.

Three freshmen were also sworn in this week, including Julie Johnson and Jessica Gonzalez, both of whom represent Dallas County districts.

Johnson ousted an incumbent Republican Matt Rinaldi, who authored a bathroom bill in the 2017 session. Her district covers northwest Dallas County.
Gonzalez beat incumbent Democrat Roberto Alonzo in the Democratic primary and faced no opposition in the November election. She represents parts of Oak Cliff and Grand Prairie.

The fifth LGBT member of the Legislature is Erin Zwiener, who represents Hays and Blanco counties southwest of Austin. She identifies as bisexual.

Zwiener, speaking in her office just before being sworn in, said she was surprised her sexual orientation wasn’t an issue in her campaign. She ran for an open seat against a Republican that said during his campaign that marriage was between a man and a woman. Zwiener said that stance actually hurt him in his campaign because the district, which includes several universities, has a young demographic.

Zwiener said although she has what she calls a “heteronormative family” — she’s married to a man — she did speak about being bisexual several times on the campaign trail “when it was relevant.”

While there are more women in the new Texas Legislature than in any term except 2013, when there were four more, women are still under-represented. Zwiener joked that the LGBT Caucus is the one place where women are over-represented.

The Swearing In
Room on the floor of the House of Representatives was tight. Desks for the 150 members of the chamber fill the room, and for the swearing-in ceremony, 400 additional chairs were added for lawmakers’ families to sit on the main floor.

Seating is by assignment, and the members of the LGBT caucus are scattered. Each member chooses a seat based upon seniority. Party affiliation is irrelevant in seating, unlike in Congress where Democrats sit on one side and Republicans on the other.

Mary Gonzalez and Jessica Gonzalez sit next to each other on the left side, center. Israel is right side toward the rear. Johnson is on the right toward the front.

After a voice roll call of the House members, Secretary of State Rolando Pablos administered the oath of office, then members of the House chose their Speaker.

Rep. Dennis Bonnen was the only name placed in nomination. He was seconded by two Republicans and two Democrats — longtime LGBT-ally Senfronia Thompson from Houston, now in her 24th term, and Mary Gonzalez. In her seconding speech, Thompson called Bonnen “a man who keeps his word.”

In Mary Gonzalez’s speech, she talked about when she was 12 years old and her house burned down. Her family relied on help from the community for food, clothing and shelter until they rebuilt their lives. She said that’s what motivated her to go into public service so she could give back to her community.
She also talked about her Republican father and said Bonnen “shares qualities of my father.”

Walking to the chamber from her office in the underground extension before the swearing in ceremony, Mary Gonzalez said she trusts Bonnen, who pledged there would be no bathroom bills on the floor of the House this session.

Republicans that spoke about Bonnen echoed similar themes. Matt Krause, a Tarrant County Republican, said they chose someone who would “level the playing field” to allow all members from both parties to “represent their districts.”
Governor’s speech

After Bonnen was elected speaker by a unanimous vote, Gov. Greg Abbott addressed the chamber. In his speech at the beginning of the last session, he spoke in platitudes and said very little of real substance to begin a session obsessed with where some young Texans could pee.

This year, Abbott was specific in his proposals. He said he wants to make schools safe from gun violence; he wants the legislature to takes steps to help the Gulf Coast become more resilient in recovering from storm damage, and he wants to reform school finance and property taxes, issues Democrats campaigned on and that helped them pick up a dozen seats.

Speaking in her office before the swearing in ceremony, Israel said she hoped Abbott would address school finance reform this session, adding that the governor should be thinking about his legacy.

More than anything else, she said, people remember governors for what they did for education. She pointed to former Gov. Mark White, noting that when he died, “everyone said, ‘Oh, he was a good governor for education.’” Then she warned that if education wasn’t better funded, Abbott would be remembered for bathroom bills.

The five members of the LGBT Caucus each campaigned with education finance reform as their top issue. Israel is the only one who has filed an LGBT-related bill so far. That one relates to banning the use of reparative therapy on anyone under 18. Other House members have filed legislation about including sexual orientation and gender identity in non-discrimination laws and repealing the sodomy law and the law banning legal recognition of same-sex marriage.
So why did Israel file this particular bill? “It’s about helping kids,” she said.

Around the Capitol
• The Texas flag flying over the Capitol on swearing-in day belonged to Amber Briggle, who has a transgender son. Rep. Donna Howard, D-Austin, arranged to have the flag flown in honor of transgender Texans. They hoped to set a different tone to begin this legislative session compared to the last one.

• While incumbents in both parties made a point of introducing themselves to new members, there was special interest among incumbents about Johnson, who raised more than $900,000 for her campaign to unseat Rinaldi. Before considering a run for office herself, Johnson had raised millions of dollars over the years for other candidates. Her reputation as a potential political powerhouse preceded her.
Her secret to winning? Working her ass off. Block walking. Making calls. Meeting people. Supporting issues people care about.

• When Johnson’s wife, Dr. Sue Moster, joined the Legislative Ladies, she became the first same-sex spouse to join the group. When she received the call, the legislative wife inviting Moster to join asked who her husband was. Moster corrected her, explaining Julie Johnson was her wife. “Oh, you must be a Democrat,” the woman said politely.

Zwiener’s husband, Quincy Kennedy, also joined the Legislative Ladies, because the group is open to all spouses of House members. We don’t know if that membership has anyone in the Capitol completely confused — the husband of an LGBT Caucus woman joining a ladies group, or so it seems, because for the sake of tradition they don’t want to change the group’s name.

• And speaking of Zwiener, she was a four-time Jeopardy winner in 2012. That has nothing to do with anything other than we thought it was cool.

• The legislative session lasts for 140 days, and many representatives go home over the weekend, especially on weeks when they break early. But during the week they live in Austin. To save some money, Jessica Gonzales and Johnson found an apartment about a block from the Capitol and will be roommates through the session. Gonzalez said it’s close enough to walk to work and go home for lunch when she wants.

• Seen in the Capitol attending the swearing in:

– Mayor Betsy Price of Fort Worth.

– Burleson Mayor Ken Shetter and family, there to celebrate the swearing in of his mother, District 10 Sen. Beverly Volkman Powell.